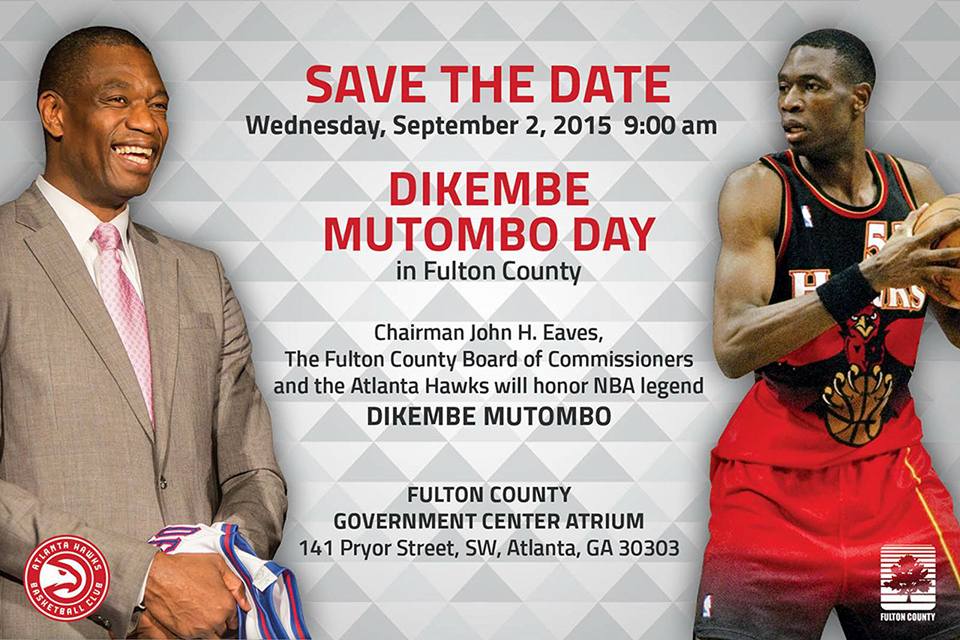 On Wednesday, Sept. 2nd, Chairman John H. Eaves, the Fulton County Board of Commissioners, and the Atlanta Hawks will honor NBA great, Dikembe Mutumbo. The ceremony will take place at 9 am at the Fulton County Government Center Atrium located at 141 Pryor Street, SW, Atlanta, GA 30303.

Mutumbo played 18 seasons in the NBA and held down the paint for the Hawks from 1996-2000 before being traded in 2001. Mutumbo is known for his trademark finger wag which he would flash after a block. He stands only behind Hakeem “the dream” Olajuwon as the NBA’s best shot blockers. Mutumbo received the NBA Defensive Player of the Year four times and was an 8-time all star.

For all of his professional accomplishments, Mutumbo is celebrated for his contributions to humanitarian work. In 1997, he started the Dikembe Mutumbo Foundation to help better the living conditions in his native Democratic Republic of Congo. That same year, the Foundation began plans for a $29 million, 300-bed hospital in the capitol city, Kinshasa.

Ground would be broken in 2001, but construction would not start until 2004 as Mutumbo had trouble getting donations for the project even after donating $3.5 million of his own money. By August, 14th, 2006, Mutumbo had donated $15 million to the completion of the hospital and was opened on Sept. 2nd, 2006. The hospital is named after Dikembe’s mother, Biamba Marie Mutumbo, who died from a stroke in 1997.

When the hospital opened in 2007, it was the first of it’s kind in that area in 40 years. It sits on a 12-acre site just outside Kinshasa in Masnia, where almost a quarter of the city’s 7.5 million live in poverty.