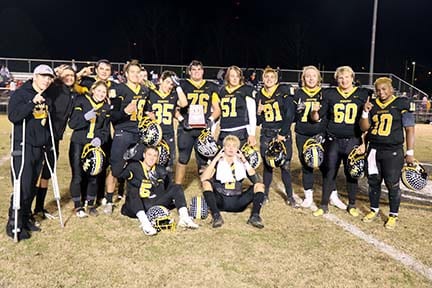 The anticipated rematch between the Robbinsville Black Nights and the Murphy Bulldogs took place last Friday with the winner etching their name on the bracket for the 1A State Championship.  The Bulldogs had the victory back in September over the Knights and were looking to repeat history with another win and send their opponents home for the season.

Coming off a late fourth-quarter win(33-29) over the Mitchell Mountaineers the previous week the Bulldogs were ready for the rematch.  The Mountaineers advanced to the semi-final game after an upset(32-13) of the higher seeded Thomas Jefferson Classical Academy.  The forecasted weather

held and made a great night for high school football.  Coming out of the locker rooms both teams were pumped and it showed as the captains took the field for the coin toss.  Robbinsville won the toss and chose to get the football first and try and get an advantage from the start.  The defenses for the Bulldogs and Mountaineers played strong throughout the first quarter not allowing either team to put points on the board.  Things would change drastically in the second for Murphy as Micah Nelson and his offense stepped up the running game.  Slade McTaggart and K.J. Allen found the gaps in the Robbinsville defensive front to start piling up

the yards.  The second quarter also saw McTaggart break the zeros on the scoreboard with a 1-yard touchdown at 9:56 on the clock. Later in that quarter, McTaggart would be disqualified for the remainder of the game on a flagrant personal foul penalty.  With the Bulldogs leading rusher now out of the competition Allen and others stepped up to get the job done. K.J. Allen scampered in fro 3 yards out for the Bulldogs second score.  The home team offense lined up for a 2-point conversion and QB Micah Nelson took the ball on a keeper around the left side to complete a successful try and bring the score to 14-0 heading into the halftime intermission.

Coach Gentry has his players pick up where the left off in the previous half. 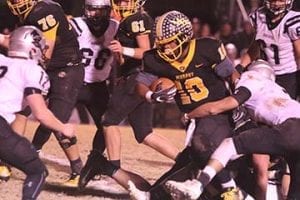 With 7:14 on the 3rd quarter game clock, once again Allen received the ball and fought for 7 yards and another Murphy touchdown,  The extra point was good and the scoreboard changed to a 21-0 lead for the Bulldogs.  Robbinsville started moving the ball a little more freely but the Dog defense quickly shut them down. With big hits and forced fumbles that were recovered by Murphy, the Black knights were once again kept off the board.  The Murphy offense would add there 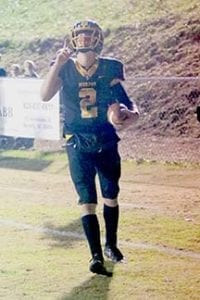 their last score of the night at 4:23 in the third on a Micah Nelson 15-yard bootleg to take a commanding 28-0 lead.  With the clock sitting at 43 seconds left in the third, Robbinsville broke their zero and crossed the goal line for their only score of the game.  The Black Knight kicker missed the extra point and brought the score to 28-6.  This would be the final score for the game as neither team was able to add points in the fourth and final quarter of the game.  This big win advances the Murphy Bulldogs to the NCHSAA 1A State Championship game to be held on Saturday the 15th at Duke University.  The Bulldogs will suit up against the Pamlico Hurricanes who had a narrow victory in their semi-final match-up.