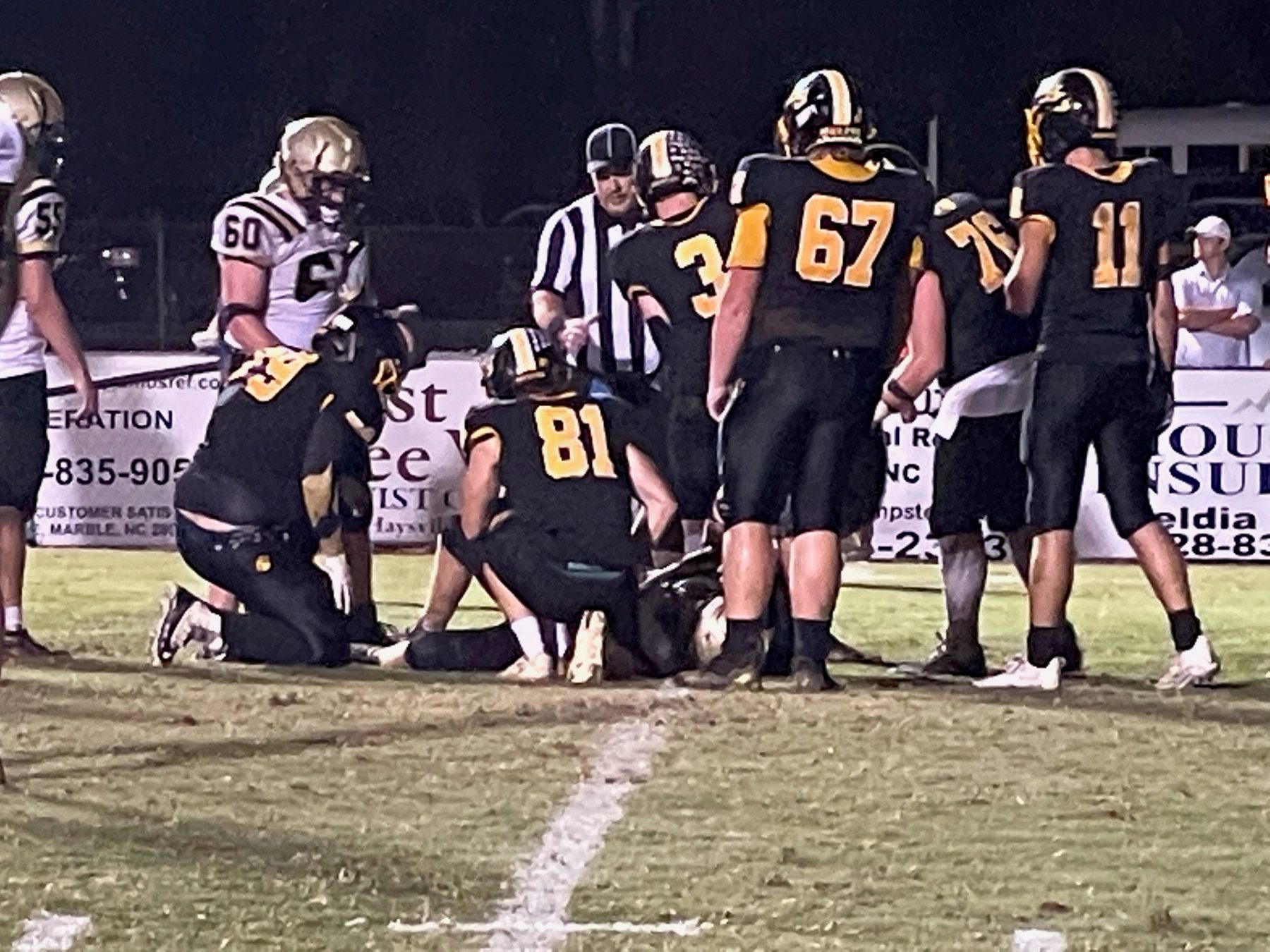 (Robbinsville, NC) – – The real coaches, beyond Joseph Watson and Dee Walsh, for tonight’s game with the Bulldogs and Black Knights should be the Black Friday shoppers in their families. I have been listening to some of the best post-Thanksgiving shopping maniacs in my family. They have developed game plans for getting into stores and bumping their fellow shoppers before they can get to the sales.  This culture of our families are more ruthless than some of your football opponents.  They know how to blitz their opponents; run for the sale; block; pass; and cross the finish line. Like the coaches, they know how to argue with the managers and get the discounts and rainchecks. Football players take council from your coaches, and while you pass the giblet gravy and dressing, ask how to get the win from your Black Friday shopper family members. That same grit is going to be needed Friday night. By the time we get to kick-off they should be off their playing field and give you good advice.

Seriously speaking, validation of the real Football King of the Smoky Mountain Conference seems to be weighing heavy on Murphy Bulldog and Robbinsville Black Knight fans and throw in a trip to the next round of the 1-A State Playoffs. Murphy (9-and-4) and Robbinsville (9-and-3) are two of the best teams in the state and both teams have earned that respect through the last half of the season and through the playoffs.

Both teams had its struggles leading up to the middle of October when Murphy hosted Robbinsville. Murphy was struggling to find unity in its team so it could execute its schemes and reduce its mistakes. During the regular season game, Murphy and Robbinsville had collectively 215 yards through 21 penalties. That game also hinged on good clock management and special teams’ success for the Black Knights.

The Murphy Bulldogs have taken a journey to this part of the state playoffs similar to the one the poet Virgil made in Dante’s Inferno but a much shorter trip back to the light than going through all nine circles of torment. Murphy went on a rough patch and needed to rebound from some costly mistakes and build strength and unity on the team. The Bulldogs were coming off a close game with Cherokee, which several players will tell you they probably should have lost and a lopsided game with Hayesville. The biggest shock was the loss it suffered to Andrews, which had instilled doubt Murphy would have success in the playoffs. A big win over Alleghany and a road trip to Mountain Heritage placed the Bulldogs in a great platform to face number one seed Eastern Randolph. It’s a nice boost of confidence. The Murphy offensive front line was key to opening up holes for Running Backs like Ty Laney, who had 197 yards on 22 carries and two touchdowns.

Robbinsville was working to replace Running Back Cutler Adams, who was suffering from back pain. Adams has been the offensive workhorse for the Black Knights. He has approximately 2,000 yards rushing this season. Cutler is back burning up the field with a few touches given to Kage Williams. This dynamic duo has a great front line. Traditionally big, the Black Knight front line has opened the holes to help lead its runners to almost 3,000 yards of traps, counters, dives, and basic downhill football. Led by Senior Guard/Tackle Carlos Wesley and Senior Lineman Ben Wachacha are the Black Knight star play makers in the trenches. Teams relying on the downhill runs find it difficult getting through this frontline. They tend to hit you before you hit them and that is part of the Black Knight prowess, being more physical and busting you in the mouth – Mountain Football.

Passing and Defense. Robbinsville struggled to gain the lead last week over North Rowan. The Cavaliers gained most of their yardage from passes, which was not covered well by the Black Knights. This may be one of the best opportunities for the Murphy Bulldogs to take advantage of Robbinsville and possibly achieve success in the game. If Murphy Quarterback Kellen Rumfelt has the same performance as last week (9 of 13 completed passes for 101 yards) the Bulldogs will have a good night. The Bulldogs will probably have more of a challenge running downhill schemes. We know Robbinsville will rely on its downhill running toward Murphy. Men in the trenches like Jonathan Hamby, Tryntden Moss, Kyle Willard, Jeremiah Dickey, and Rylan Smith will have to block and play good assignment football. Stop Cutler Adams and this is 80 percent of the battle.

“Winning a conference championship means you had a good season.”

“If you are practicing on Thanksgiving and we have a good frost on the ground you have had a heck of a season, be thankful for more than turkey that day.”

Murphy Head Coach Joseph Watson has those same feelings. “It is a very anticipated game. State championship game is a big game, as big as they get. But you have to get this one (Win the game against Robbinsville) to get to the state championship. It’s just one of those games you have to continue to keep playing and hopefully you can come out with a victory,” Murphy Head Coach Joseph Watson stated this week after practice. Coach Watson seconded our statement about Murphy and Robbinsville not really being the same teams we watched almost a month ago doing battle at Bob Hendrix Stadium/David Gentry Field. “It is absolutely two totally different teams (they have really improved). Robbinsville, the first time we played them, didn’t have their Running Back (Sophomore Cutler Adams). He is a huge part of their offense and a huge part of their defense as well. A lot of people don’t see that,” Watson added. As for Murphy he realizes there were challenges the Bulldogs were facing. “We (Murphy) were still struggling trying to find some cohesion and trying to figure out where to put everyone. (We were) Going through some growing pains,” Watson states.

Team leadership is ready for the game. This week has been good for the Murphy Bulldogs. The team has continued to maintain a serious approach to this week’s game. The Bulldogs feel good momentum as the postseason has been good and do not want to see the season come to an end. Murphy Quarterback Kellen Rumfelt says behind all of the X’s and O’s there may be a need to trim back the wick to head into Big Oaks stadium. “We have to relax and play our game. Last time we were super excited; just trying to do more than we were capable. This week we are going to stay within ourselves and play as hard as we can,” Rumfelt stated after practice. Rumfelt, enjoying his senior year says through the ups and downs this fall, to be in the fourth round of the state playoff and going to Big Oaks is going to be a great experience.

Payton McCracken has always had a connection with Robbinsville. This game is his last against Robbinsville and is very important. “This is a big game. It always is. Any time we play Robbinsville it is always going to be a great game between the two of us. So, we are looking forward to it,” Payton stated this week after practice. Defense is going to be key this week for Murphy, McCracken says the team has had its formula on making improvements with its techniques.  “Like I have said the past couple of times you have talked to me, it is all about just cleaning up the little things. These are out main points of focus right now just playing how we know how to play,” Payton added.

The Robbinsville v Murphy game will kick off this coming Friday night (November 26, 2021) at Big Oaks Stadium in Robbinsville at 7:30 PM. Ticket sales are being held at the respective high schools for $8.00 per ticket. Dress warm, game time weather is expected to be partly cloudy and game time temperature in the mid-30s. We hope you will make the game and support your team. If you chose to eat leftover turkey and dressing and stay at home, connect up with Team FYN Sports on Facebook and we will provide updates.