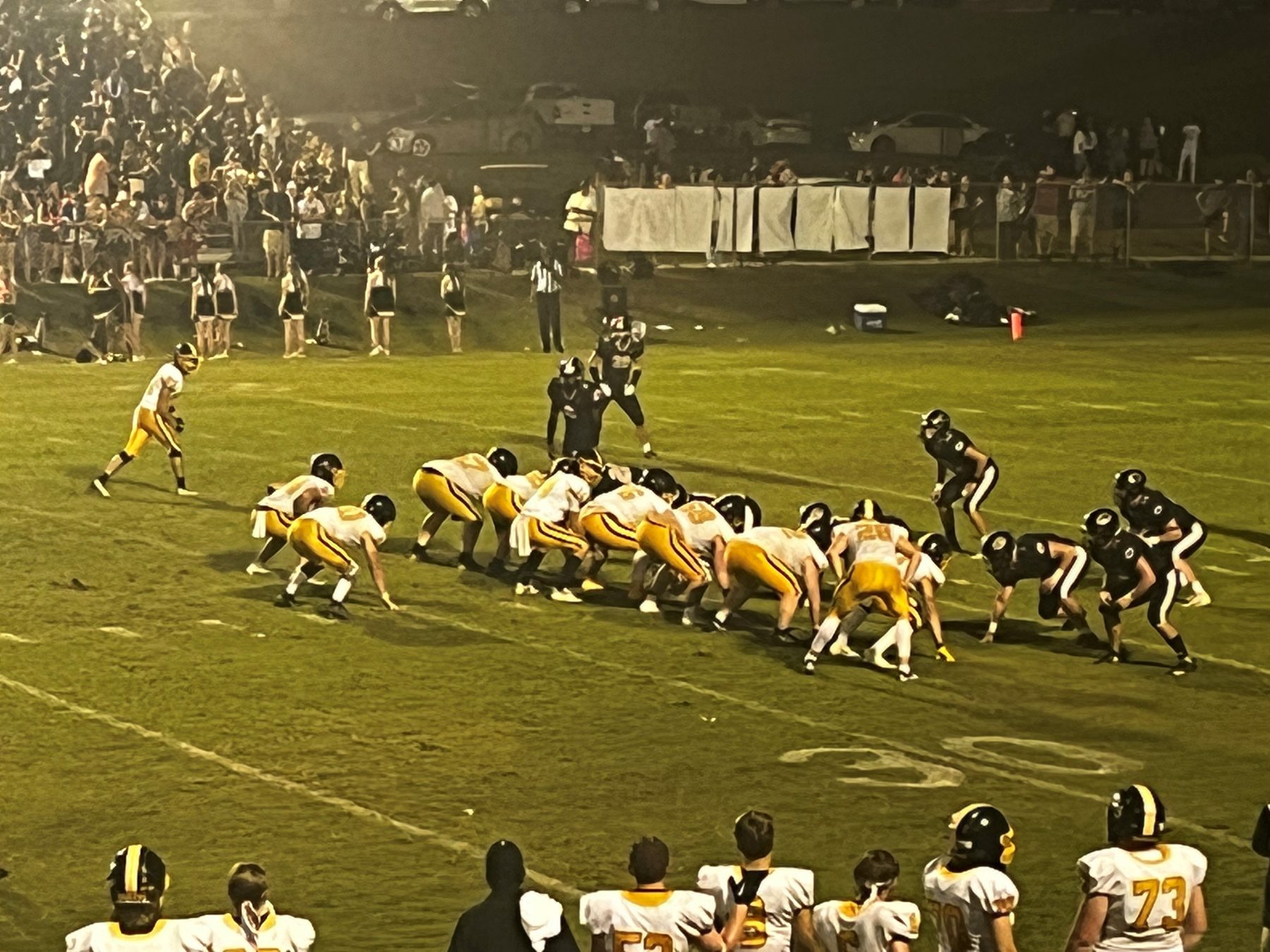 (Commerce, GA) – – Math always tells the pure science of events and outcomes.  There is a good series of math equations explaining the DARN GOOD football game between the Murphy Bulldogs (1-and-1) and the Commerce Tigers (1-and-1).

Murphy and Commerce played the first half like a game of Shoots and Ladders.  The Bulldogs and Tigers moved the ball either close to the end zone or got in for touchdown to either lose the ball on a fumble or suffer a score erasing penalty.  The game was scoreless down to 40 seconds left to go in the second quarter with a 5-yard run by Tigers Sophomore Fullback Tysean Wiggins and a Point-After Touchdown (PAT) kick by Ivey Tolbert to make the first half score Commerce 7 Murphy 0.  After climbing up the ladders and being forced down the slides, fans and Bulldog players looked fatigued and disappointed.

A good half time break and a little reflection of the first half pepped up the Murphy defense and charged the offense.  Commerce and Murphy melted the clock in the first half with lots of run plays.  Knowing this going into the second half, Bulldog leadership made a wise decision to run Ty Laney on a two-point conversion after Junior Running Back Hunter Stalcup led the Bulldogs into touchdown town with 4:33 left to go in the third.  Bulldog defenders caught a second wind after being on the field so long in the first half to hold Commerce scoreless in the quarter.

Tigers Sophomore Running Back Jaiden Daniels punched the ball into the end zone from 4 yards out after good drive with 11:52 left to go in the fourth quarter.  Hunter, Ty, and John Ledford helped drive the ball back to the end zone and take the lead for good.  Stalcup ran in from one yard out with 7:48 left to go in the game.  Will Joyner nailed the PAT.  The rest of the game was scary and icy as the Tigers Daniels and Wiggins continued to move the ball well threatened the Bulldogs. Eventually the Murphy defense placed a halt to the Tiger’s effort and did not allow a fourth down conversion.  The defensive effort slammed the door and forced the Tigers down the slide to end the game by running out the clock.

A messy first half for the Murphy and Commerce offensive play led to some more concentrated play in the second half along with smart play calling carved out the narrow win by Murphy.  This is a game the analysts said Commerce would walk away with the game.  They didn’t count on the cat-like action the Bulldogs defense set on the Tigers offense (a little ironic).  The Murphy defense was threatening Commerce in its backfield almost as soon as ball was snapped.  The trouble for Murphy was trying to catch the fast as lightning runners and bring them down with the least amount of gain.  So many players contributed aside from the crushing hits and stops by Murphy’s Mason Thrasher and Ty Laney.  Coach Heath Curtis explains it was real good team effort to stop the Tigers.  Coach Curtis’ comments can be heard at the link in this article.

Good protection from the offensive front line allowed running backs Ty Laney to rack up 143 yard (9 yards per carry); Hunter Stalcup to get two touchdowns very effectively on 6 carries for 66 yards; and John Ledford keeping the Bulldogs effective with 9 carries for 55 yards.  They ran like Rhinestone Cowboys; getting on their horse in star spangled football game, and you can bet they will get instant messages and notes from people they don’t even know; possibly offers over the phone (Credit Glen Campbell).  Ty Laney already has an invitation to a national high school football game, which we will talk about later.  Ty and Hunter added more yards on four key pass receptions from Quarterback Cole Laney.  Cole completed 4 of 6 passes and one interception for 37 yards.  Cole, Ty, and Hunter spoke to Team FYN Sports after the game.  Their comments are at the link in this article.

There was no significant adjustment to the second half after a sloppy first half.  The Bulldogs needed to take care of the ball on offense and fire down on the Tigers defensively in the second half.  Sticking to the game plan and making a key call to go for two shows the Bulldogs have the ability and the coaches are confident they can finish the drill.  Murphy Head Football Coach Joseph Watson was pumped about this win and how it illustrates the Bulldogs can make magic on Friday night.  Coach Watson’s comments can be heard at the link in this article.

South Pittsburg Pirates are the next team for the Murphy Bulldogs in South Pittsburg, Tennessee.  The Pirates (1-and-1) suffered a crushing 41-to-Nothing loss to Chattanooga Christian.  The Pirates started out the season with a 35-to-6 win over Sequatchie County.  The competition gets more difficult as they will face the Lookout Valley Yellow Jackets Friday.  Murphy has an open week Friday to prepare for the 3-hour road trip to face the Pirates.  South Pittsburg has been led by Senior Quarterback Payton Campbell who appears to carry the ball way more than Running Backs Freshman Britt Chadwick and Sophomore Sam Evitts. This points to some youth and possible inexperience in the offensive back field.  Otherwise Campbell will go to the air predominantly to Senior Tight End Brayden Johnson.  In the first game of the season Campbell had 145 yards rushing and completed 78 yards of passing to Johnson.  This is all according to the Sequatchie County game stats. Two weeks away, this game will be an exciting game for Murphy.  Team FYN Sports is working on a broadcast arrangement with South Pittsburg.  The school will not allow video streaming and may allow Team FYN Sports to provide an audio only broadcast.  We will announce our coverage details later.  Stay connected to Team FYN Sports for more details on this game.