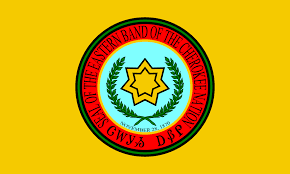 Westmoreland was speaking in reference to supporting the Opposition To Catawba Indian Nation Casino in North Carolina Resolution proposed at the April 2019 meeting of Cherokee County Commissioners.

The Resolution was passed. 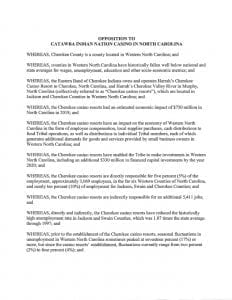 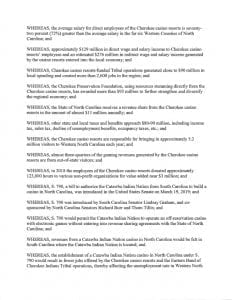 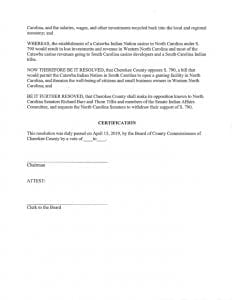 “While the [Eastern Cherokee] tribe respects and encourages progress for other Native American communities, including South Carolina’s Catawba Indian Nation, the recent filing of a bill in the US Senate to give North Carolina land to the South Carolina tribe for an off-reservation casino is nothing more than a modern day land grab by the federal government of Cherokee aboriginal lands, ” quoted in an earlier Press Release by the ECBI.

U.S. Sen. Lindsey Graham, R-S.C., introduced the bill that would put land in trust for the Catawbas Casino. To wit:

“To clarify certain provisions of Public Law 103–116, the Catawba Indian Tribe of South Carolina Land Claims Settlement Act of 1993, and for other purposes.

Be it enacted by the Senate and House of Representatives of the United States of America in Congress assembled,

(a) Gaming Facility Authorized.—The Catawba Indian Nation (formerly the Catawba Indian Tribe of South Carolina) is authorized to own and operate a gaming facility on the land described in section 2 of this Act, in Cleveland County, North Carolina.

(c) Land In Trust.—The Secretary of the Interior is hereby authorized to take the land described in section 2 into trust for the purpose of conducting gaming, on behalf of the Catawba Indian Nation.

(d) Rights Preserved.—Except as otherwise expressly provided in this Act, nothing in this Act shall prevent any party from enforcing all rights, privileges, or prohibitions as contained within the Catawba Indian Tribe of South Carolina Land Claims Settlement Act of 1993 (Public Law 103–116).” 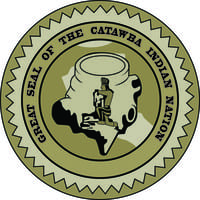 The Catawbas lived along the banks of the Catawba River dating back for what is now believed to be at least 6,000 years. Their ancestral land includes most of the Piedmont area of South Carolina, North Carolina and Virginia. The Piedmont region is land lying between the Appalachian Mountains to the west and the Atlantic Coastal Plain to the East.