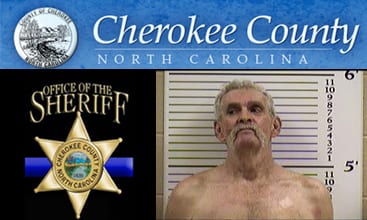 Shortly after 10 pm July 07th, 2015 the clerk at a local hotel called the Cherokee County Communications Center stating that a male had come into the hotel and used threats to shoot the clerk to get a room. The clerk further stated that the male in the room stated he would shoot law enforcement if they showed up. Units of the Cherokee County Sheriff’s Office and Murphy Police Department responded to the hotel.

The subject was identified as Ronald Coleman, which had barricaded himself into a residence on June 19th, 2015, resulting in a lengthy standoff with Coleman finally surrendering and being taken to the Cherokee County Detention Center.