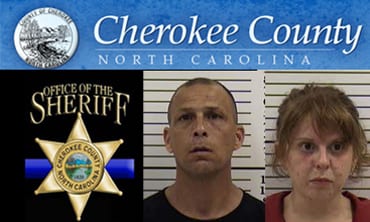 On or about July 24th, 2015 the Cherokee County Sheriff’s Office responded to a local hotel to investigate possible controlled substance violations. Upon arriving Mowery and Howe were identified as the individuals that were occupants and that while the room was being cleaned methamphetamine and marijuana were found.  The responding Deputy seized the illegal items which included marijuana, and loaded needles of methamphetamine solution, and drug paraphernalia. The deputy proceeded to get a warrant for the arrest of Mowery and Howe.

During the traffic stop, Mowry gave permission for a search of his vehicle. Ajax, the Cherokee County Sheriff’s Office K9, was utilized and located additional marijuana which was seized.

Rachel Edna Howe was arrested and charged with Possession of Methamphetamine. Howe was placed on a $2,500.00 unsecure bond and was released. Howe is scheduled to be in Cherokee County District Court on August 04, 2015 at 9 AM.

Christopher Douglas Mowry was arrested and charged with Possession of Methamphetamine, Possession of Paraphernalia and Possession of Marijuana Paraphernalia. Mowery was placed on a $5,000.00 unsecure bond and was released. Mowery is scheduled to be in Cherokee County District Court on August 04, 2015 at 9 AM.

Sheriff Palmer commented “We appreciate the community’s involvement in this drug case. Their information was instrumental in getting these folks before the court. I also want to thank North Carolina Highway Patrol Trooper Cook for being alert and assisting in this case. This also shows the benefit of our K9 program in locating drugs no matter where folks decide to hide them. This was a good job by all concerned.”