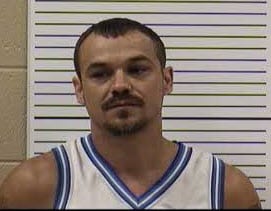 Murphy, NC— Cherokee County Sheriff Derrick Palmer announced during the March 28th, 2016 Superior Court Setting the Honorable Jeffrey P Hunt sentenced registered sex offender Ricky Leroy Leistra Jr. to no less than 80 months to a maximum of 108 months for a violation of the North Carolina Sex Offender Registry. During the month of February 2015 information became known to the Cherokee County Sheriff’s Office that Leistra was not living at the residence at which he had registered and further Leistra failed to return a semi-annual verification form as required by the North Carolina General Statutes. During the May 2015 arrest of Leistra, several tablets of Heroin were found and seized. During the investigation into the Sex Offender Registry Violations information was found that in May 1999, Leistra entered a guilty plea in Cherokee County Superior Court to Indecent Liberties with a Child an offense requiring him to register with the Sheriff of the county in which he or she resides. Additionally, North Carolina Court Records indicate that Leistra has at least two previous convictions for violations of the Sex Offender Registry, one of which happened in Cherokee County. During the February 2016 Superior Court setting Leistra was found guilty of failing to return to the Sheriff’s Office the semi-annual verification form as required by North Carolina General Statutes. Sentencing was set off until the March 28th, 2016 setting of Superior Court where Leistra made admission that he was a habitual felon and was sentenced under those guidelines. Sheriff Palmer stated “We are grateful for the excellent team work on this case. All the agencies involved, Andrews Police Department, the District Attorney’s Office, and our Deputies and Investigators work tirelessly in concert to ensure compliance with the registry laws. The safety of our citizens is of paramount importance especially our young ones.” Sheriff Palmer encourages any one that has information to report it. To report crime in Cherokee County you can call the anonymous tip line at 828-837-1344 or email a tip at [email protected] or call 911 if you observe a crime in progress.