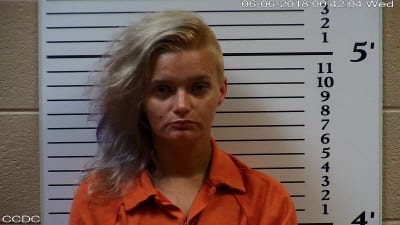 On June 5th, 2018 a Deputy with the Cherokee County Sheriff’s Office observed Lowman operating a vehicle in which she committed a traffic violation. While the Deputy was investigating the traffic violation he observed in plain view an article of paraphernalia. A second Deputy arrived on scene and found a container that had a small amount of methamphetamine. Lowman was arrested for the possession of the illegal substance.

During the traffic stop the deputies found three small children in the car along with a pit bull. A Cherokee County Department of Social Services worker came to the scene and arranged for the children to go home with a relative at the request of Lowman. The pit bull was brought to the Sheriff’s Office where it was kept until another relative of Lowman could come get it.

Lowman was taken to the Cherokee County Detention Center where she was taken before the North Carolina Magistrate set a $5,000.00 bond. Lowman is currently incarcerated awaiting either bond or a June 12th, 2018 District Court date.

Sheriff Derrick Palmer stated “Good work by the deputies both with getting the drugs off the street and making it safe for the children. We also thank the Cherokee County Department of Social Services for their assistance in the matter.”