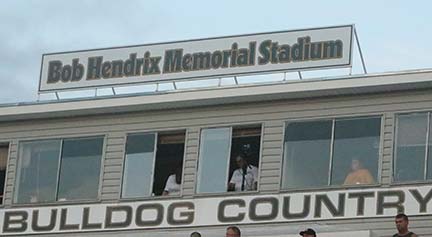 Bob Hendrix Memorial Stadium was full once again with energetic fans ready to cheer on the home team in the Bulldogs of Murphy high School. Coming in to Friday’s game at 4-1 overall were not only looking to get just another win.  The team was looking to get Coach Gentry his 398th career win in over 40 years as a coach.

night.  With 366 total offensive yards on just 25 plays, Murphy averaged 14.6 yards per play.  This offensive couldn’t be stopped going 3 for 3 on third down and had no punts on the night.  Senior quarterback Micah Nelson led his team up and down the field to a 42-8 win over the Wildcats.  Time of possession for the Bulldogs was 11 minutes and 17 seconds compared to almost 37 minutes for their counterparts .

With 6 offensive touchdowns on the night the Bulldogs spread the ball among several weapons. At 4:59 in the first quarter Slade McTaggert received the

hand off and went 36 yards for the first Murphy score.  The extra point was successful off the foot of Kaitlynn Wheaton. Murphy scored at 1:29 in the first on a McTaggert 1 yard run followed by Wheaton’s extra point.  The big quarter for the Bulldogs was the second with 21 points put on the board.  At 11:09 quarterback Micah Wilson went 18 yards, Reid Beal took a Wildcats punt and returned it for an 80 yard score with 9:22 on the clock. Justin Dorsey on a pass from Wilson stepped in to the end zone after 65 yard catch and run.  Murphy would add there final score of the game at 11:08 in the third to bring score in at 42 on the night.  Extra points on the scoring efforts by Murphy were at 100% by Kaitlynn Wheaton and Annie Kate Dalton. The Andrews Wildcats pushed a score across with 4 minutes and 32 seconds in the game.  They would add the 2 point conversion bringing final score to 42-8 giving Coach Gentry his 398 career victory.

The Murphy Bulldogs will return to the field on October 12th as they travel to Hayesville looking for a win to continue their good season and get Coach Gentry a little closer to 400 wins.

Stats for Murphy on the night: 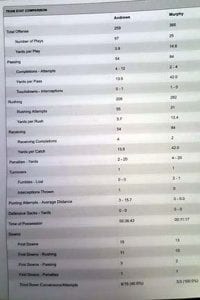 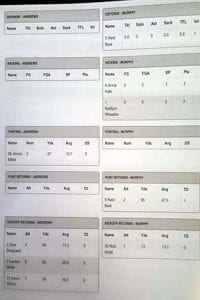 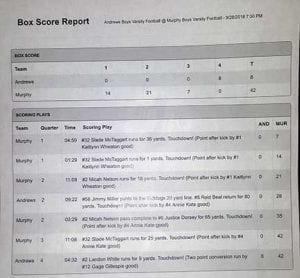