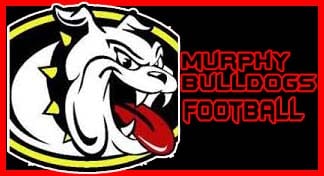 In a rare Thursday night game of high school football the Murphy Bulldogs and the Rosman Tigers clashed on the field.  Once again the high powered scoring machine of Coach Gentry’s Bulldogs had the batteries charged and ready.

The scoring happened quick for Murphy when #32 Slade McTaggart scampered 14 yards into the end zone putting the Bulldogs up by 7 with the extra point by Kaitynn Wheaton. Murphy never looked back from that moment forward.  Getting in on the scoring was defensive back #5 Reid Beal.  With 8:56 on the first quarter clock Beal intercepted a Tiger pass and took it back for another quick touchdown bringing the score to 14-0.  The Bobcats put up 4 touchdowns in the first quarter for a 28-8 lead heading into the second,  Devonte Murray added 1 and McTaggart strolled across for his 2nd of the game at 3:54.    Murphy’s offensive onslaught couldn’t be stopped.  The second quarter saw the Bulldogs take a commanding lead putting up 20 more on 2 scores by McTaggart and the second Touchdown in the game by Murray.  The Tigers of Rosman scored twice in the quarter to bring the halftime score to 48-22.

The third and fourth quarters was all Bulldogs.  With the game basically out of reach of the Tigers, Murphy put 16 on the board in quarter 3 and 7 in the fourth to close out the dominating victory 71-22. Slade McTaggart had 5 TD’s and Devonte Murray crossed the goal line 3 times for the Bulldogs.  These two ran for a combined 384 yards on 17 carries.  The total offensive numbers for Murphy were phenomenal.  Led by #2 Micah Nelson the Bulldogs had 745(629 on the ground)total yards on 48 plays from scrimmage.  Possession time in the game was heavy to the Tigers at 30:03 while Murphy had the ball for just 17:57.

Next Week the 8-1(5-0 in conference) Bulldogs will host Cherokee for a another big game in their quest to take an undefeated schedule into the post season.  Game time is 7:30 so come support your Bulldogs! 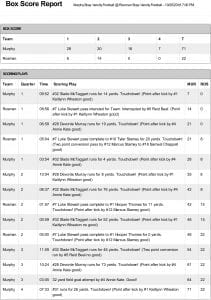