The Murphy Bulldogs showed up in full force on Tuesday as they piled it on in their conference game against the Hiwassee Dam Eagles, beating them 12-3.

It all started in the first inning, when Freshman Dawson Hensley doubled on the first pitch of his at bat, driving in 2 runs. The Dogs offense did not stop there as they had 2 bombs on the day, thanks to Briggs 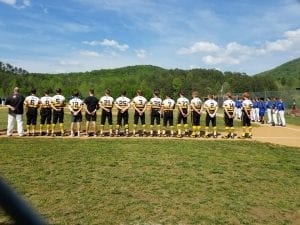 Cornwell and Kellen Rumfelt. Kellen Rumfelt is definitely peaking at the right time of the years as just a week ago he threw his first complete game no hitter. Cornwell has been a vital part of the Bulldog offense all year and leads the team in homers this year. He is also one of the top in the SMC in RBIs, batting average and dingers.

The dogs tallied 11 hits on the day, as Payton McCraken and Rumfelt both had multiple hit days.

Hunter Curtis toed the rubber for the Dogs as he threw 5 innings, allowing 1 run on 1 hit, striking out 10 and walking 0.