Jerry Gonzalez, Executive Director of the corporate-funded, anti-enforcement lobbyist group, GALEO, was quick to send out a media release praising the “historic” appointment and boasting that King had assisted the activist group as keynote speaker at a GALEO breakfast fundraiser several years ago.

“Congrats to Chief King, close friend of @GALEOorg !” was the much-repeated celebratory post on the GALEO Facebook page.

Kemp’s Insurance Commissioner appointee has no background or experience in the insurance industry.

Kemp’s appointment of the GALEO-connected police chief to Insurance Commissioner comes as a shock to many Republican voters in the state. Georgia’s conservative U.S. Senator David Perdue stopped the Obama nomination of a one-time GALEO board member, Dax Lopez, to a federal bench seat in 2016 because of his concern with the GALEO relationship. 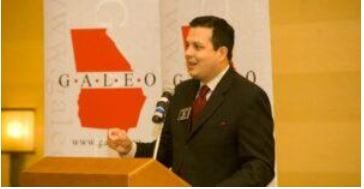 Perhaps unknown to most Republican voters, in addition to marching in the streets of Atlanta against enforcement of existing federal laws on immigration, GALEO and its director are well-known in the state Capitol for lobbying against state legislation aimed at reporting criminal aliens to federal authorities and establish an official database of illegal aliens serving time in the state’s prison system.

GALEO lobbies against voter ID, official English and local jails honoring ICE detainers. Executive Director Gonzalez is known to verbally attack female legislators when he does not approve of speeches or positions on illegal immigration. In 2011, Gonzalez posted this angry explanation of being asked to leave the Georgia Capitol when he lashed out at state Senator Renee Unterman for a speech she made on the floor of the senate. 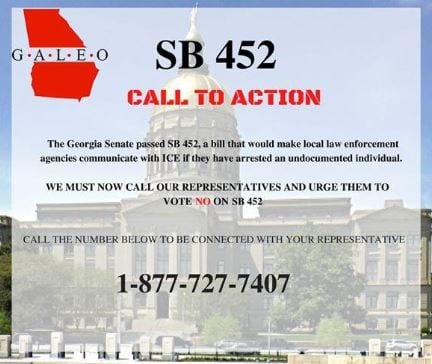 In 2011, GALEO’s Gonzalez was escorted out of a Rome, Georgia luncheon that featured a panel discussion on immigration when he began yelling at diminutive state Rep Katie Dempsey as reported by the Rome News Tribune.

Gonzalez is a former lobbyist for the radical MALDEF corporation. GALEO founder, former state Senator Sam Zamarippa was a MALDEF board member. MALDEF founder Mario Obledo is best remembered for his promise that “California is going to become a Hispanic state and if anyone doesn’t like it they should leave. They ought to go back to Europe” on the Tom Likus radio show in 1998.

According to the left-leaning Georgia Budget and Policy Institute, Georgia is home to more illegal aliens than green card holders.

Kemp ran on a platform that included his now famous “I got a big truck, just in case I need to round up criminal illegals and take ’em home myself,”

Republicans are learning that before he was elected governor, then Secretary of State Brian Kemp also gave GALEO a fundraising boost when he attended the annual GALEO Power Breakfast fundraiser in 2015.

On GALEO, the liberal AJC political blogger informed readers today  that the Republicans will need to court the illegal alien lobby group as a necessary first step to “court Hispanic votes in the future” which ignores thirty years of election results since the Republican immigration amnesty of 1986.

All this creates a simple question: Does appointee John King agree with the GALEO agenda? He is due to be sworn in in the next few weeks, somebody should ask.

D.A. King is president of the Marietta-based Dustin Inman Society