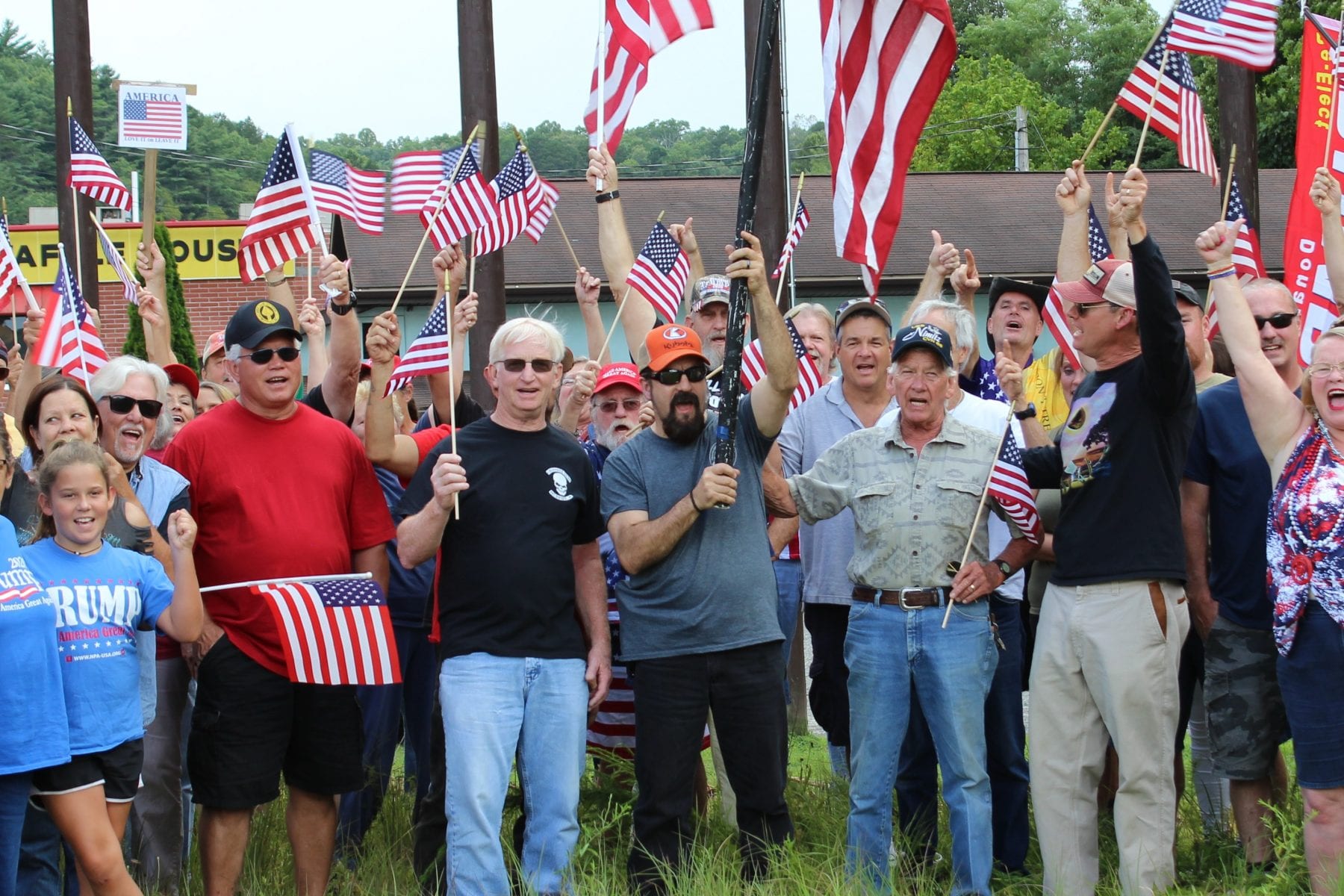 Murphy, NC – Supporters of Cherokee Guns’ now infamous “The four horsemen are idiots” billboard turned out in full-force of business’s owner and free-speech.

Cherokee Guns’ owner Doc Wacholz thanked around 150 members of Murphy, NC community for showing their solidarity with his right to free speech. However, he confirmed that the billboard would be coming down.

“A lot of good has come of it and a lot of bad has come of it. I hate to say that between the death threats,” said Wacholz, “Even President Trump got threatened, Secret Service got involved, ATF, local police, judicial department, it’s just been a melee.”

ATF agents have recorded every direct threat issued to Cherokee Guns, Wacholz’s family, friends, and employees. Opposition groups have even posted Wacholz home address online, but it has since been taken down.

Many supporters echoed their belief in the First Amendment rights, and that the left desires to silence differing opinions by ratcheting up their rhetoric. 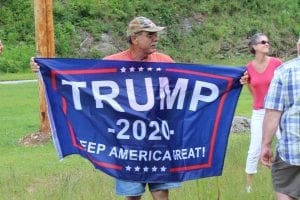 Trump supporters demonstrated their belief in free speech for all Americans.

The uneasiness about the growing divide within America was papable at times with murmurs of “civil war” if people don’t stand up for their beliefs.

“We are never heard. We can offend everybody, supposedly, but they can never offend us. I totally agree with that billboard,” cried out one female supporter after Wacholz finished speaking.

Unanimous agreement that the billboard didn’t threaten any of the congresswomen featured. It expressed a viewpoint that places a critical eye on their actions.

“Idiots come in all shapes, sizes, and colors,” hollered a supporter when asked if they felt the billboard was racist.

“Hopefully, the district realize what is going on with these people and vote them the hell out. That’s what gotta happen to get these anti-American’s out of Congress,” commented Wacholz.

When asked about Allison Outdoor Advertising’s input, Wacholz confirmed the company helped him bring his idea to life, but bears no responsibility for his actions. The billboard expresses his views, no one else’s.

“This is everybody’s right to do this. First Amendment, baby, said Wacholz, “My opinion, it might not be yours’s, anti-American those four Congresswomen.”

“All the donations are going to Saint Jude’s on Tuesday, stated Wacholz, “We’ll probably give the organization between $2,000 and $3,000 with Mountain Waterworks matching our amount.”

Over 300 calls have come in for stickers and from across the country to express support for the billboard. These individuals have offered to donate to Wacholz’s willingness to express his beliefs against the leftist ideology.

The crowd prayed for the men and women who lost their lives and were injured in the shootings on Saturday night. They wished for God to welcome these individuals into his arms and give them peace.

Supporters condemned the idea that actions like the billboard spurred on the violence in El Paso, Texas and Dayton, Ohio.

“Either in the New York Post, or New York Times, [Congresswoman Alexandria Osasio-Cortez] was advocating that the Palestinians riot in their country, and also people here this country should be rioting,” said by-stander Pete Buckley, “Mostly, [these shootings] are always done by cowards. I don’t see it done by God-fearing people that are authorized to carry, that are working-class people. Most of all shootings are by kids. Kids!”

The crowd echoed the sentiment that “the squad” contributed more to inciting violence, than the middle-class, small-town, god-fearing people of this country.

“To take pride in your country, to love your country, does not make you a White Nationalist. This was a political point of view that I had for a long time before Trump brought it out as ‘the squad’ and it just kind of spiraled in the wrong direction based other people’s point of view and opinion, which they have the right to. Once they start taking it in the wrong direction, it’s just too much. I don’t want to see anybody hurt or killed over this stupid board.”

On the business side, the billboard brought an influx of customers to Cherokee Guns since it went viral.

“We had a lot of patriots come in to buy guns, shirts, ammo just to come in our store and support us. We’ve gotten good support and backbone support than negativity. Maybe about 70 percent / 30 percent. 70 percent being positive, said Wacholz. 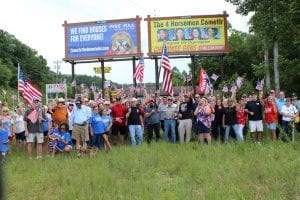 To end the rally, the supporters and Wacholz came together for a photo underneath “the squad” and summed up their beliefs in one word, “USA.”