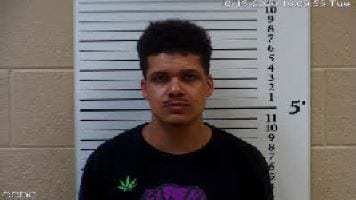 April 21, 2021 – At approximately 3:23 pm, on April 20th, the Cherokee County E-911 Communications Center received a phone call in reference to a stolen vehicle that was taken from a business on Tennessee St. While the victim’s report was being taken, the stolen vehicle was located nearby, along with the suspect, Mr. Isaiah Zavier Nelson. During this time, an altercation occurred with the suspect and one of the workers of the initial stolen vehicle’s owner.
The male victim (name withheld for privacy reasons) was stabbed multiple times, treated by the Cherokee County Medics, and airlifted shortly thereafter. During this time, the suspect fled the area on foot after leaving the stolen motor vehicle behind. After searching the area, and many businesses, he was finally located.
Mr. Nelson was arrested without incident on Andrews Rd. at 4:17 pm. He was charged with Possession of a Stolen Motor Vehicle and Going Armed to the Terror of the Public. He is currently being held at the Cherokee County Detention under a $25,000.00 secure bond. His initial court appearance is scheduled for April 29th, 2021, at 9:00 am. However, additional charges may be pending in the near future.
As of this morning, the victim had undergone surgery last night. After calling Erlanger in Chattanooga multiple times this morning, we have yet to hear back regarding his status.
While this incident was occurring, many activities, including sporting events, were taking place in Conaheeta Park. This is where the stabbing occurred. This information was being passed along to various staff members and other parties that were on scene at these events.
Due to the nature of this investigation, this is the only information that can be released as this time. As the investigation continues, more information will be released to the public.
The Murphy Police Department would like to thank the following agencies for their assistance:
Cherokee County Sheriff’s Office (Administrative Division)
Cherokee County Sheriff’s Office (Criminal Investigation Division)
Cherokee County Sheriff’s Office (Patrol Division)
Cherokee County Detention Center
Cherokee County E-911 Communications
Cherokee County Magistrate’s Office
Cherokee County District Attorney’s Office
Cherokee County Medics
LIFE FORCE Air Medical
Murphy Police Department Press Release stabbing stolen vehicle