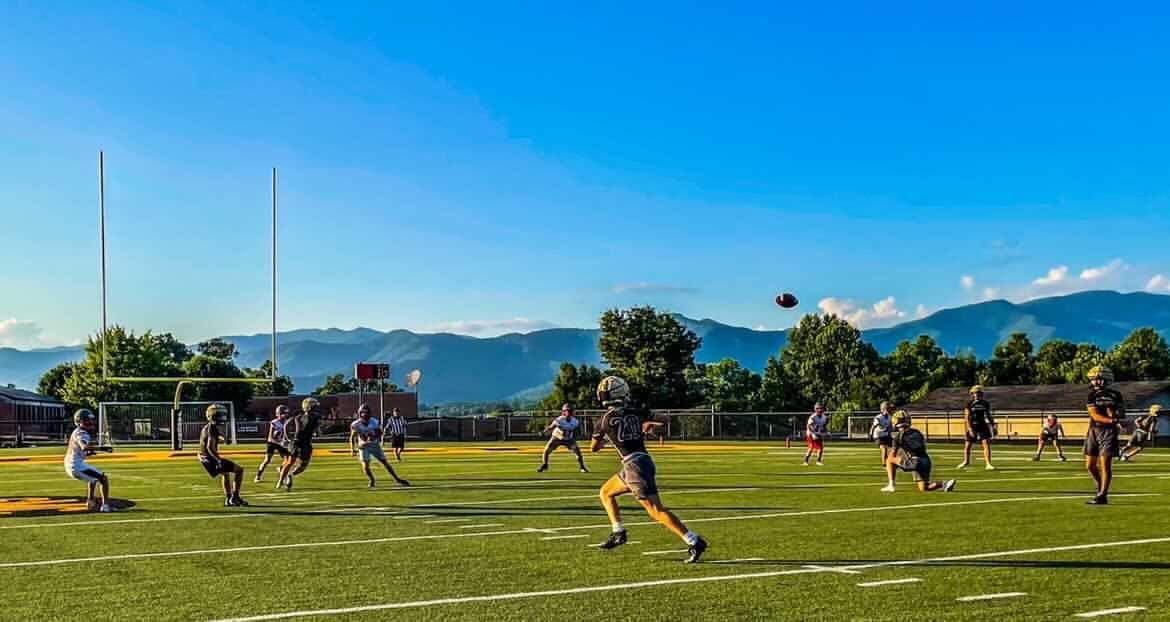 We got a good look at all of the teams that were there, as each team played at least 3 games a piece.

Granted, teams were missing players and 7 on 7 is not the best measuring stick for real football, but we’re still going to over analyze it and read way too much into it simply because it’s the offseason and we have nothing else to talk about.

The Wildcats looked pretty decent in their first 7 on 7 of the year. If there was one word I could use to describe what I felt after watching the Wildcats all day, the word would be “excited”. Junior quarterback, #12 Donovan Bateman showed flashes of excellence for the red and black. He delivered some pretty good deep balls to his receivers, and looked great at times, but there were also points where he was a little shaky. We saw hime miss a few of his reads and hold onto the ball for a bit too long before making a bad decision and trying to fire it into double coverage. However, those are things that can be worked out with experience, and with Bateman only being a junior and already having the snaps he has under his belt, he is for sure one to watch this year and next year. He could be the top QB in the SMC in 2022.

There probably isn’t a team that has been dealt a worse hand than the Cougars have over the past year. Many thought they could compete for a State Title last year, and they probably could’ve if their Senior QB Bryson Grabowski hadn’t torn his ACL halfway through the season. With Grabowski graduated, they will have to rely on Senior Joe Boggs to be their signal caller this year. During the 7 on 7, Boggs looked frazzled. And there is so much pressure on this kid that I can’t blame him for being frazzled. He’s a linebacker, not a QB. But with everything the Cougars lost to graduation and their low numbers as it is, Boggs is going to have to be the guy. He doesn’t have a cannon for an arm, but he did make a few throws that made you turn your head. The thing you can take away from this if you’re a Basin fan, is to remember you have Sebastian Baliles back in the backfield this year. Baliles made a few snags underneath and was the go-to guy when the Cougars were able to move the ball on Thursday.

Your 2021 FYN Sports 7v7 champs, the Franklin Panthers were really impressive last week. They defeated Union County in the championship game to complete an undefeated run. Senior QB Chris McGuire was named the MVP of the day, and he is definitely not the same quarterback we’ve seen the past 2 years. McGuires decision making was pretty impressive the rest of the day after struggling in the opening game against Murphy. He picked apart Union County in the championship, and was the most impressive QB we saw Thursday as a whole. This is not the same Franklin team we saw get killed by Murphy last year. Coach Brooks has a new squad ready to play ball this year if this 7 on 7 told us anything.

I mean you can’t say enough how much it means for Hayesville for Jake McTaggart to be back on that sideline. There were times where it looked like Junior QB Logan Caldwell just closed his eyes and threw it up, and yet McTaggart came down with it. I’m not dissing Caldwell either, he looks 10x better than he did last year. The young guy just needs to make better decisions. For example, in one of Hayesvilles games against Union, it was tied 18-18 or something like that and Hayesville had the ball with 5 seconds left. Instead of just dumping it underneath when he realized the play wasn’t going to develop, he threw it deep and the Panthers came down with a game winning interception. I know it’s just 7v7, but you want to see the kid make the decision to dump it and play for OT instead of losing the game on one throw. Nonetheless, the Jackets looked pretty good for a young team.

The Bulldogs came into this thing without starting QB Kellen Rumfelt and without backup QB Cole Laney. Rumfelt still hasn’t recovered from the injury he sustained during the state championship game, and Laney had to attend a wedding. That left Sophomore Andrew Barolet as the Dogs starter. The Dogs definitely did not get what they wanted out of their young QB, who never seemed to get comfortable under center. We won’t spend anymore time talking about what happened at QB for Murphy as I don’t expect we will see Barolet playing this year. McCracken, Allen, and Hunter Laney were the bright spots for the Dogs on the day. Payton McCracken made a few catches that were sportscenter worthy and Juan Allen was all over the field, yet Hunter Laney was who caught my eye the most. If new Head Coach Joseph Watson uses Laney correctly this season, he could be poised for a breakout year.

I don’t expect Murphys performance in this 7v7 to have any correlation to how their year will go, but hey ya never know. With all of the personnel Murphy lost this season, they definitely have a huge question mark on their head heading into this new year.

Boy was it weird to look over and see Thomas Nelson in purple instead of Black and Gold. Nonetheless, you could tell Nelson has had an immediate impact on the Panthers. Their defense was definitely a tighter unit than in previous years, and new Head Coach Michael Perry had the offense clicking at times also. Up until the championship, Panthers QB Logan Helcher looked like a well oiled machine. He was using nearly every target he had, finding Eli Peugh, Caleb John and Keyton Chitwood for multiple TDs. If you’re a Union County fan, you’ve gotta be excited about your leading reciever returning in Keyton Chitwood. If Helcher can stay healthy, I think the Panthers will be pretty potent through the air this year. The Panthers goal for this year is to get over .500, and with Thomas Nelson’s defense and Michael Perry’s new offense, I don’t think that goal is out of reach.