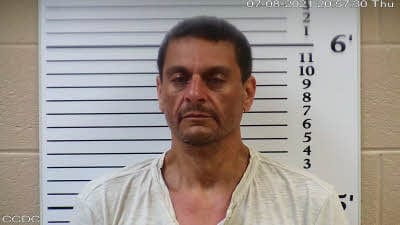 Murphy, NC— Sheriff Derrick Palmer announced the July 12, 2021 arrest of 43-year-old David Nathaniel Jones on charges stemming for violations of the North Carolina Controlled Substances Statutes.
On July 08, 2021, Deputies of the Cherokee County Sheriff’s Office responded to a disturbance call in front of the Legends Arcade on West U.S. 64, Murphy North Carolina. The nature of the disturbance was an individual was possibly overdosing. Upon arriving the Deputies found Jones and a Keifer Whitener to be the center of the disturbance. While investigating the nature of the call, Deputies found several baggies of suspected methamphetamine and suspected heroin packaged in a manner as if for sale.
Jones and Whitener were arrested and taken to the Cherokee County Detention Center where they were booked and placed under secure bonds.
On July 12, 2021 Detectives received an anonymous tip that Jones had secreted controlled substances into the Detention Center. Following up on the information Jones was found to be in possession of heroin/fentanyl hidden in his person in at least two of his body cavities.
The illegal controlled substances were seized. Jones was taken before the magistrate who found probable cause and set an additional $200,000.00 secure bond for Trafficking in Opium or Heroin and Possession of a Controlled Substance in a Confinement Facility.
Sheriff Derrick Palmer stated “We are continuing this investigation. We feel confident the controlled substances that were found from the original arrest will connect with that found in Mr. Jones. We are hoping with the installation of the body scanner we can slow and even stop the flow of drugs into the detention center.The team work in this case is outstanding and proves that working together has positive results. We want to thank our good citizen tipster and encourage our public to continue to help.”
To report suspicious activity and suspect violations of the law please call 828-837-1344 or submit a tip at [email protected]
charges Cherokee Sheriff Office methamphetamine Press Release