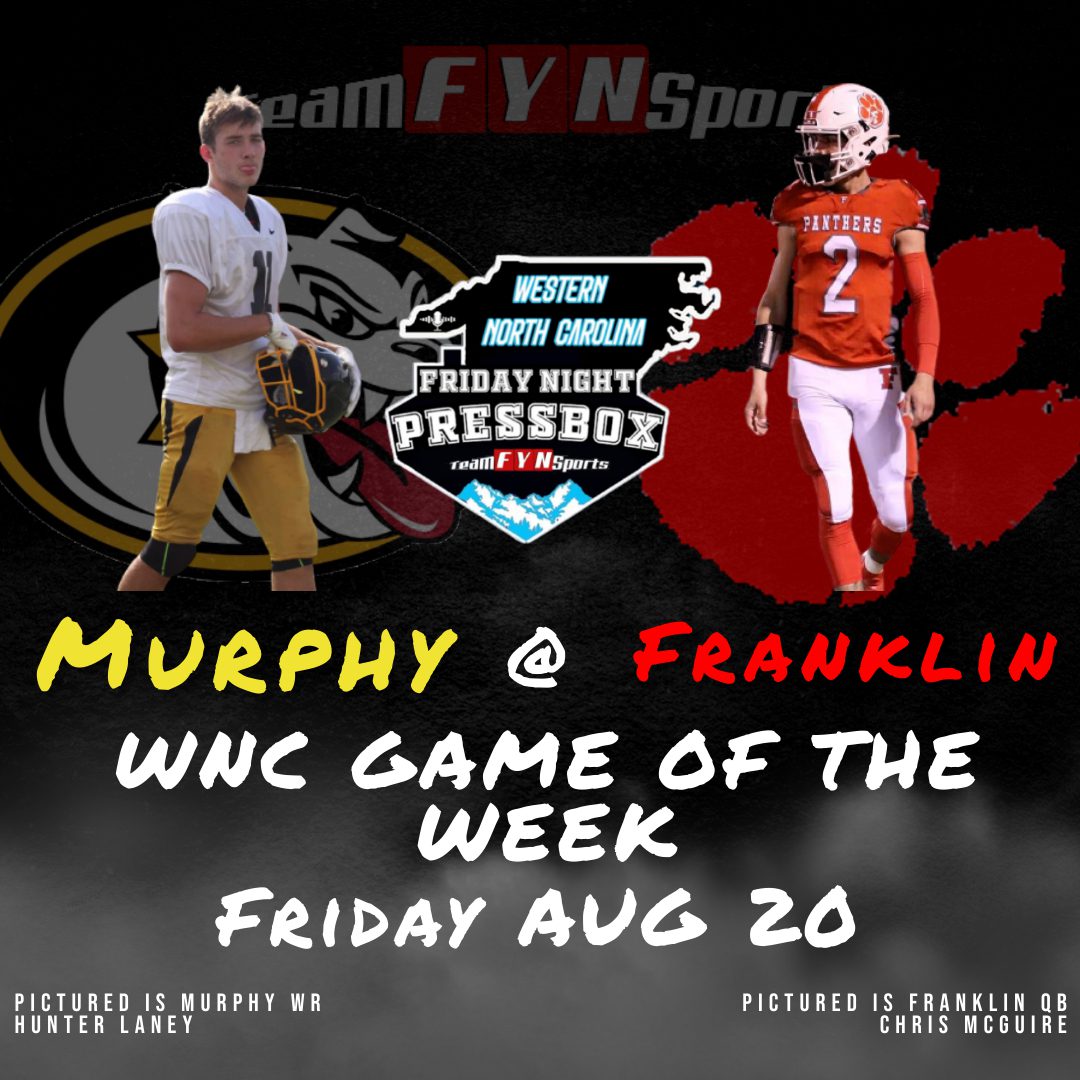 (Murphy, NC) – – Is the 2021 Murphy Football season going to be a thriller?  Will Kellen Rumfelt get to start as quarterback?  Will we win the Franklin game?  Is Murphy going to be good?  These are the questions we all want to answer “Yes.” The possibilities, even the probabilities, would indicate we could answer “Yes” to all of these questions.  Let’s explore for a moment as we are on the beginning of a new season and new era of football.

How is the season starting out?

Defense makes a season golden.  The players are ready to go and do work to make 2021 a successful season and keep the opponent from scoring.  There are some noticeable empty spots like Ray Rathburn at linebacker; Yousef Mugharbil on the line; or Coach Thomas Nelson.  Senior Bulldog Defensive Back/Wide Receiver, Payton McCracken says the defense will post a challenge to Murphy opponents.  “I think the defense will be strong.  Coach (Heath) Curtis and Coach (Eric) Laney are doing a great job.  The defensive line looks solid and we have a few people back that we didn’t have last year like Jeremiah Dickey (5’11, 252 lbs Junior lineman).  He will be a good one to watch along with Juan Allen who will be a good corner and Ty Laney at linebacker.  We are going to be pretty solid,” McCracken stated.

Offensively, the Bulldogs are solid.  The key ingredients to their strength are depth, flexibility, and experience.  We will see the same players we saw last year in the backfield and at flanker (Rumfelt, Allen, Laney – take your pick, McCracken, Johnson, Cornwell, etc.).  Murphy has a few added players like Chandler Wood and Hunter Stalcup to name a few.  Senior Bulldog Running Back and Defensive Back Juan Allen says everyone is finding their spot on the field and you can see the team getting in step for success.  “I think everyone is filling in their positions now.  You can see that now that we have had the seven-on-sevens, the scrimmage, and practice.  I think we are going to mix some things up in the backfield and you might even see Kellen (Rumfelt) back there running the ball because of his shoulder. He (Kellen) could run at any position.  Cole (Laney) will play a lot and is doing well, but Kellen will get some reps,” Allen states.

So, what about Kellen Rumfelt. This past Monday (August 16, 2021) was his first day he threw the football in either a game, practice, or scrimmage.  It was a practice day and you could see coaches, and his father Chris, pacing to look at performance and possible set-backs to Kellen hitting the field.  The official word from Coach Joseph Watson is, “Kellen starting is going to be a decision we make almost at coin-toss in Franklin Friday night.”  I sat with Kellen this week while he took treatment and iced down his arm and he is ready to play.  “It (the shoulder) has gotten a lot better these last couple of weeks.  For a while there it never got any better and that was discouraging,” Rumfelt noted about his recovery this summer.  Physical therapy has been a great help, including some eastern medicine cupping, which you can see the outline of the cup marks on his shoulder.  After a steroid shot, some moving of the chi, and physical therapy Kellen says, “It almost feels normal.  I think about another week I’ll feel just like I did last year.” He says that he only feels a slight twinge of pain or discomfort when he places too much thrust on the ball.  Otherwise he has carried on and can still play the guitar.  Based on what Kellen tells us, he may not start Friday, and that is OK in his opinion because Cole Laney can do the job.  If he does he can handle it because he is built to work through the pain and persevere.  The week off after the Franklin game will be good for his convalescence.  But, don’t expect this Bulldog to be sidelined for very long.

Talking about the diversity of Murphy, Coach Joseph Watson is ready for the season to start.  The honeymoon of being named head coach is probably over as the work and stress to get the team in shape, organize the game plan for Friday night, and get the team to Franklin is on his shoulders.  Coach Watson is asking his team to prepare to play in multiple positions and do some things outside of their normative area.  “You got to have the mentality, especially in 1A football.  You don’t always have two deep in every position.  It’s got to be next man up if someone goes down,” Coach Watson says.  That is the case for Murphy in several positions ranging from Quarterback to Wide Receiver and some line position.  Not just injury on the field, but COVID-19 has quarantined a couple of players in the early moments of the season.  During the football camp this season, Watson exercised players at multiple positions to help head off injuries.  “We are probably far along than we have ever been.  Every team starting off in the first of the year is going to have some problems to sort out and things to iron out.  The team that does that the best is the team that is going to be victorious,” says Coach Watson.

Tough season for the Franklin Panthers last year.  Franklin finished 4-and-3 this spring and tied for third place in the conference, which is not the performance probably expected by Head Coach Josh Brooks. The Panthers are rebuilding and will surge to success, which is the only formula Coach Brooks knows.  Franklin is well coach and well disciplined.  They are a physical football team that will bust you in the mouth on the front line and speed their way to a touchdown.  The defense shows man coverage and five-man front line.

Skill, grace, and grit are the characteristics in Senior Panther Quarterback Chris McGruire (5’11, 152lbs).  Maybe a little shorter than the average high school play-caller, but he is quick and can hit dime from fifty meters.  His favorite target is going to be Senior Wide Receive Keagan Pollack, who we know about his skill from last year.  If you remember last year’s game, Murphy struggled a bit in the first half and McGuire ran the ball on keepers to stay in pace with the Bulldogs.  At the half, Murphy adjusted and held Franklin scoreless in the second half to win 48-to-14.  In the opening stanzas of that game, Franklin took the lead until Murphy could go ahead to the half 21-14.  Murphy, in an efficient manner, rolled up 429 yards of offense in 51 plays and held franklin to 213 yards in 62 plays, using less time than the Panthers.  McGuire threw two interceptions.  You can bet McGuire and the rest of the Panthers will not forget that feeling when the game kicks off in the Panther Pit Friday night.

Busting through the front-line defense for a dive or trap may be a challenge against the Panther defense.  The average size of the five-man front line is 240 lbs with the biggest player, Cameron Cody weighing in at 6’0, 282 lbs.  The Panthers may man up on the Bulldogs, which didn’t play out very well for Northside-Pinetown High in Raleigh, which was the last team to play man coverage on the Dogs.  Junior Linebacker Brayden Watts and Senior Linebacker Kegan Pollack will seal the gaps for the defense.  Junior Defensive Back Ty Handley will add some speed to cover the passes.  Handley also serves as the Panthers Half-Back on offense.

Coach Watson, are you ready for the Panthers?  “Well every time you play Franklin you are going to know what type of team you have.  They are going to attack you at every facet of the game.  They are always very well coached and very well disciplined,” Watson responds.  Franklin Quarterback Chris McGuire has impressed Coach Watson stating, “He (McGuire) is one of the best quarterbacks we will see this season.  He can really go.  He can run, he can throw.  He is definitely a dual threat quarterback.”

Expect a great football game.  Being in the Panther Pit, Coach Josh Brook deciding to stay, and some experienced players.  The Bulldogs have the skill and ability to rip their way through the Panther Pit.  Winner of this game will be the one that makes little to no mistakes. Panther Pit is a place where anything can happen…and when it does it’s usually exciting.