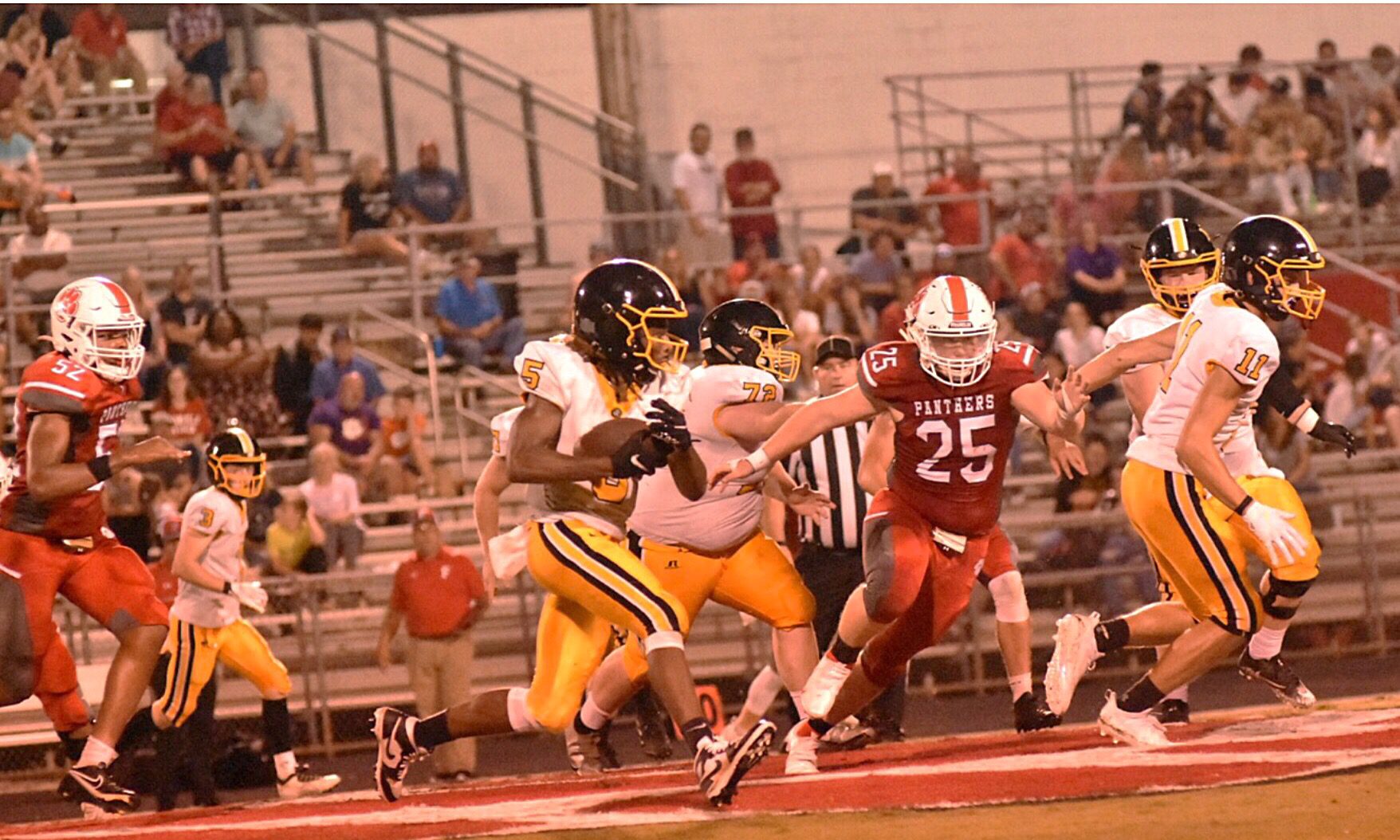 (Franklin, NC) – – Franklin Panthers took every opportunity the Murphy Bulldogs handed out. There were too many mistakes, penalties, turnovers, and miscues from the Bulldogs. A shallow punt, two interceptions, and a turnover on downs fueled the Panthers to a 35-to-15 win. You could tell from the chatter on the sideline the Bulldogs will not put this loss behind them and will use it to motivate the team to success moving forward. They will have a week to review, rebuild, and heal as Murphy has an early open week before it has the season home opener on September 3rd (Youth League Night) going into the Labor Day Weekend.

Franklin took first possession and burnt about 4:36 to run its first touchdown. The dual threat action from Quarterback Chris McGuire pushed the ball down to the one-yard line. McGuire ran the ball in on a one-yard keeper and Grant Adams posted the point-after kick to make the score Franklin 7 Murphy 0.

Murphy’s first possession showed promise the Bulldogs would keep the pace. With about 6:04 left to go in the first quarter, Senior Bulldog Running Back Chandler Wood went on a sprint to the endzone from 41 yards out, only to have the six taken off the board for a holding call, Murphy’s first penalty. For the night, Murphy had 6 penalties setting the Bulldogs back 55 yards. The penalties called on Murphy were costly. By the 2:34 mark in the first quarter, Senior Quarterback Kellen Rumfelt ran a 1-yard keeper to give the Bulldogs its first touchdown. Lady Bulldog Kicker, Catalina Barrero scored the point-after and evened the score to Murphy 7 Franklin 7 and ended the quarter for scoring.

Franklin shutout the Bulldogs with no scoring and placed 14 points on the board to end the first half Franklin 21 Murphy 7. The two Franklin touchdowns were set up in short field position. During the early moments of the second quarter, Payton McCracken set a shallow punt that placed the Panthers inside the Murphy 40-yard line. A well-executed Chris McGuire pass and a Kellen Stiles run took Franklin to the 3-yard line, where Kellen Stiles ran it in, and Grant Adams nailed the point-after.

Next Murphy possession, the Bulldogs start their drive on the 34-yard line. Working to aggressively move up the field, Kellen Rumfelt through his first interception to Franklin’s Ben Waldroop who moved the ball to the Franklin 45. In an instant it seemed, Chris McGuire launches a 55-yard pass play to Keagan Pollack that ends the first half scoring. Adams hits the point after. Half-time score is Franklin 21 Murphy 7.

Visibly, the Bulldogs appeared to be inspired and fired up to make positive change and catch up with the Panthers. But a Bulldog fumble recovered by Franklins Aiden Stewart, a facemask penalty and some big run plays by Franklin dampened Murphy’s spirits. Franklin’s Junior Running Back Ty Handley bobbled the ball down to the 13-yard line and almost gave Murphy hopes to recover the ball. Instead, McGuire aired the ball back out to Pollack and built the lead to 21 (Franklin 28 Murphy 7).

Murphy fans thought the Panthers would score again as Kellen Rumfelt, who by now was feeling more pressure and was hurried more in the backfield was sacked for a loss. Taking over this time didn’t work too well for Franklin. Bulldog linemen were able to get to Panther Quarterback McGuire to force a fumble, which was recovered by Payton McCracken and taken to the Franklin 10-yard line. Two plays later, Junior Murphy Running Back, Ty Laney ran eight yards for a touchdown and a complementing 2-point conversion. That would end Murphy’s scoring for the night. End of the third Franklin 28 Murphy 15.

You could see fatigue and frustration all through the sideline and it showed on the field. Kellen Rumfelt was scrambling to make plays and was about to be sacked and threw the ball. One of the last penalties was intentional grounding. Franklin stopped throwing the ball as much and ran the ball to burn up the clock and kill any chance of Murphy mounting a comeback. To seal up the win, McGuire launched an 18-yard pass play to Davis Anders and Erick Munoz kicked the point-after. Final Score – Franklin 35 Murphy 15.

Take a ways from the Game

This is not the typical Murphy game, and we knew it would be a physical game and Franklin has improved a lot. The pure Murphy fan can probably walk away from this game knowing that the Bulldogs handed too many opportunities to the Panthers…and they cashed them all. Ask Coach Joseph Watson and he would agree. “You can’t make that many mistakes and beat a quality team like Franklin. We said coming into the game that Franklin is going to tell you what kind of team you have. We have a team that is going to fight you. But too many mistakes to beat a good team like that,” Coach Watson stated after the game.

Murphy has a week off to think about this game; work on the mistakes made; and heal. The early open date is not something Coach Watson wanted necessarily. But, after this game he is welcoming the extra time to exercise the Bulldogs some more. “I always said this open week, I didn’t love it at first. It kinda comes at a good time. But you never want to go into an open week with a loss. You never want to go into any week with a loss. We do need to heal up a little bit here,” Watson added.

Coach Watson felt like the Bulldogs played diligently and put out a good effort. Just too many mistakes. Turnovers and miscues don’t win ballgames. Two weeks from now you will probably see some big improvements in the Bulldogs. Murphy will open its first of three home games on September 3rd against Georgia Force; followed by a powerful South Pittsburgh, Tennessee team on September 10th; and Life Christian Academy on September 17th. It will be exciting to see how Murphy builds.