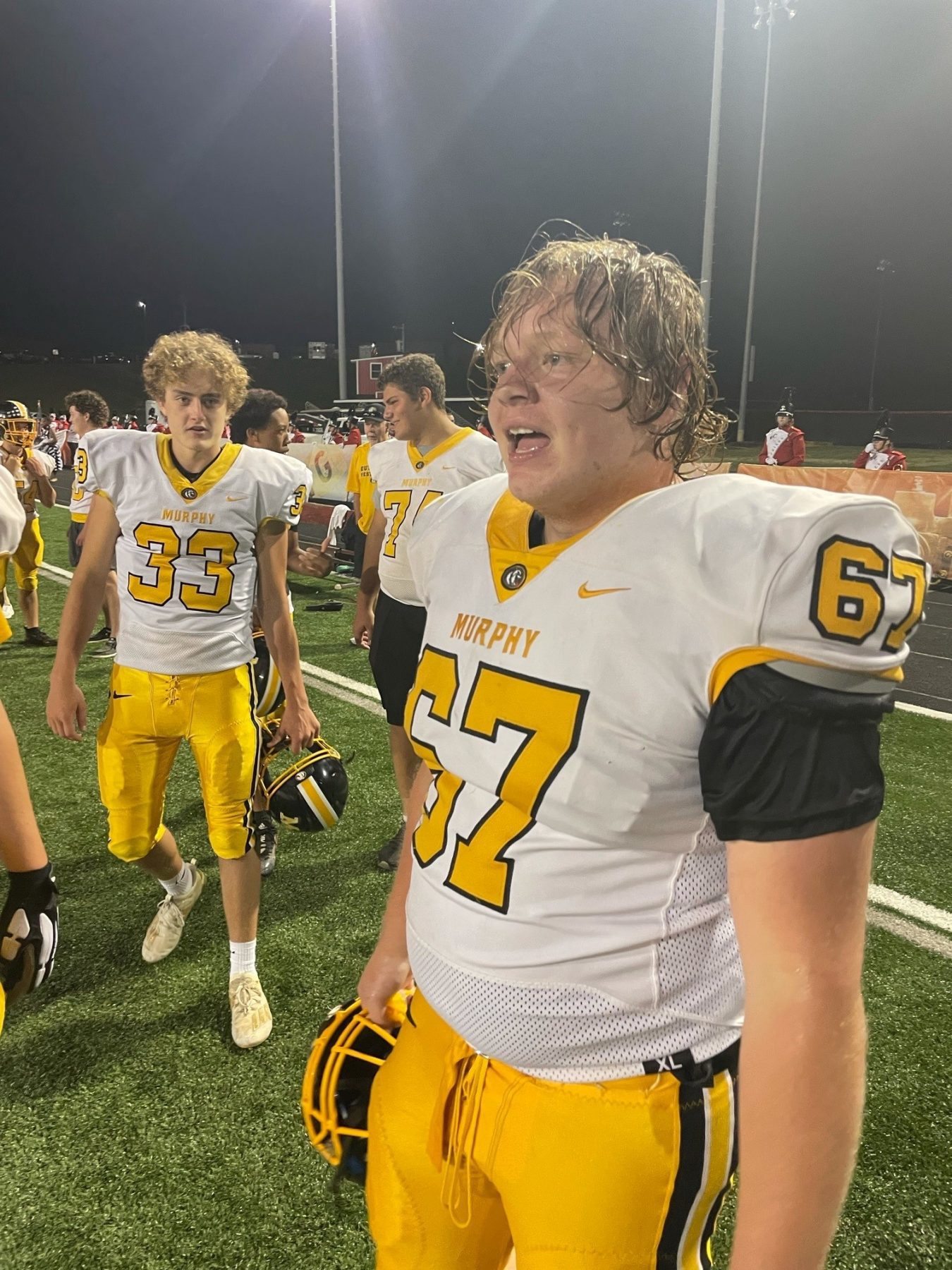 (Rogersville, TN) – – The Murphy Bulldogs really stepped out on the field like rhinestone cowboys in their own star-spangled rodeo.  Cherokee High on its first possession fumbled to Murphy’s Cole Laney which set the first touchdown to his brother Ty Laney, who ran a 39-yard touchdown.  This set the tempo and started flurry of awesome play by the Bulldogs.  Through the first quarter Murphy’s defense flew to the ball and delivered some hard hits that stifled the Chiefs’ offense.  Joe Swain, Rylan Smith, Chandler Wood, and Kyle Willard, to name a few in the trenches kept Cherokee High out of the end zone. Big plays from Ty Laney, Juan Allen, Chandler Wood, Payton McCracken, Hunter Stalcup, and dead-on passes from Kellen Rumfelt lit up the scoreboard for a commanding Murphy lead at the half over Cherokee High 36-to-nothing.  We can bet that some of these rhinestone Bulldogs may be getting cards and letters from schools they don’t even know.  The 63-to-23 win over Cherokee High now lifts the Murphy Bulldogs to a 2-and-2 record on the 2021 season.

You must be pleased with the Murphy performance that was well executed, physical, and fast tempo.  From the sideline you could tell the intensity was not just on the field, the Bulldog coaches were ready to record a win.  “It was good!  It was a long bus ride out here.  The guys were ready to play.  I am proud of their effort.  We had a good week of practice.  It shows when you put in the work during the week,” Murphy Head Coach Joseph Watson stated after the game.

Through the first half, Murphy averaged almost 20 yards per play.  The game was sprinkled with a few Murphy miscues, fumbles (which were recovered by the Bulldogs), and very few penalties.  The Bulldogs didn’t waste any time correcting and building intensity in the next set of plays.  Coach Watson says this is what happens when you build a game on high tempo.  On the other side of the plays Cherokee high had its struggles with Murphy.  “This is what happens when you start playing faster.  You start running everyone to the ball.  That’s what we are focusing on and that’s what we want to do.  Good things happen,” Coach Watson explained.  Cherokee High was able to demonstrate it is a good football team.  Chiefs’ Quarterback Micah Jones was able to connect on a several passes to his favorite receiver Preston McNally and Will Price to keep Murphy honest.

Senior Running Back Chandler Wood closed the door on the Chiefs through the third quarter, which started slowly for the Bulldogs.  Wood scored two 40-plus yard touchdown runs within about four minutes of each other to end the third quarter Murphy 56 Cherokee 16.  Wood also scored on a 56-yard run to end the first quarter.  Rumfelt, his final touchdown pass was to Hunter Stalcup for a 31-yard touchdown pass play.  Murphy’s defense went to work on Cherokee and added another fumble recovery that resulted in a 30-yard TD carry by Junior Defensive Back Cameron Grooms, which brought Murphy fans to their feet.

Chandler Wood has been injured and has not been in on as many plays as he would like.  He made up for lost time.  Chandler explained about his play saying, “Tonight they finally gave me all the touches (carrying the ball) and made the best of it.  We came out here after getting clobbered by Rabun (County High) we needed this win.  People think Murphy is having a rebuilding year.  That is not the case, and we are here to prove that.”  Wood says blocking by the line was the key to his good running and is the best.

Murphy Bulldogs agreed the touchdown of the night was a defensive fumble recovery by Junior Lineman Kyle Willard.  With about a minute left to go in the second quarter, Chandler Wood lit up Chiefs’ Quarterback Micah Jones on a hard hitting sack, which caused the fumble.  Willard was in the glide path to the ball.  After the game he said he had always been trained to flop on the ball, but this time he was taking it to the end zone.  He did! Kyle carried it for 20 yards to end the first half.  At the moment of play, Kyle says, “It was good.  It was fun.  I got my ankle rolled on.  Chandler hit that boy (Chiefs Quarterback Jones) hard.  Got back there; scooped it; and scored; it was fun.”

The game has so many stories and people to point out we could crash this site loading all the accomplishments.  There were awesome passes, carries, blocks, defensive assaults, and actions that carried the Murphy Bulldogs.  Quarterback Kellen Rumfelt summed it up saying, “I thought we played a great game, and we were very balanced on our play calling and it was a great win!  I think what stuck out the most to me was seeing those guys that normally don’t get to score touchdowns, Cameron Grooms, Willard, and Joe (Swain) picked up a fumble and he had one man to beat.  But I was really proud of those guys because you know sometimes, they are not getting their name called every play, but they are working just as hard as anyone out here.”

As soon as game stats are available, Team FYN Sports will add them.  At press time, stats were not available.

Union County High is the next opponent this coming week.  Most of the players feel like they are ready.  It will have a little drama because across the field former Murphy Defensive Coordinator Thomas Nelson will help orchestrate the defense against Murphy.  Kellen Rumfelt says the Bulldogs need a little work to get ready.  “I don’t think we are ready yet.  I think we will definitely be ready by Friday.  We have to come back Monday and work just as hard as we have been and we will be alright,” Rumfelt added.  The game will be at Union County Friday night at 7:30.   Stay connected with Team FYN Sports for more details this week on the Murphy at Union County game.