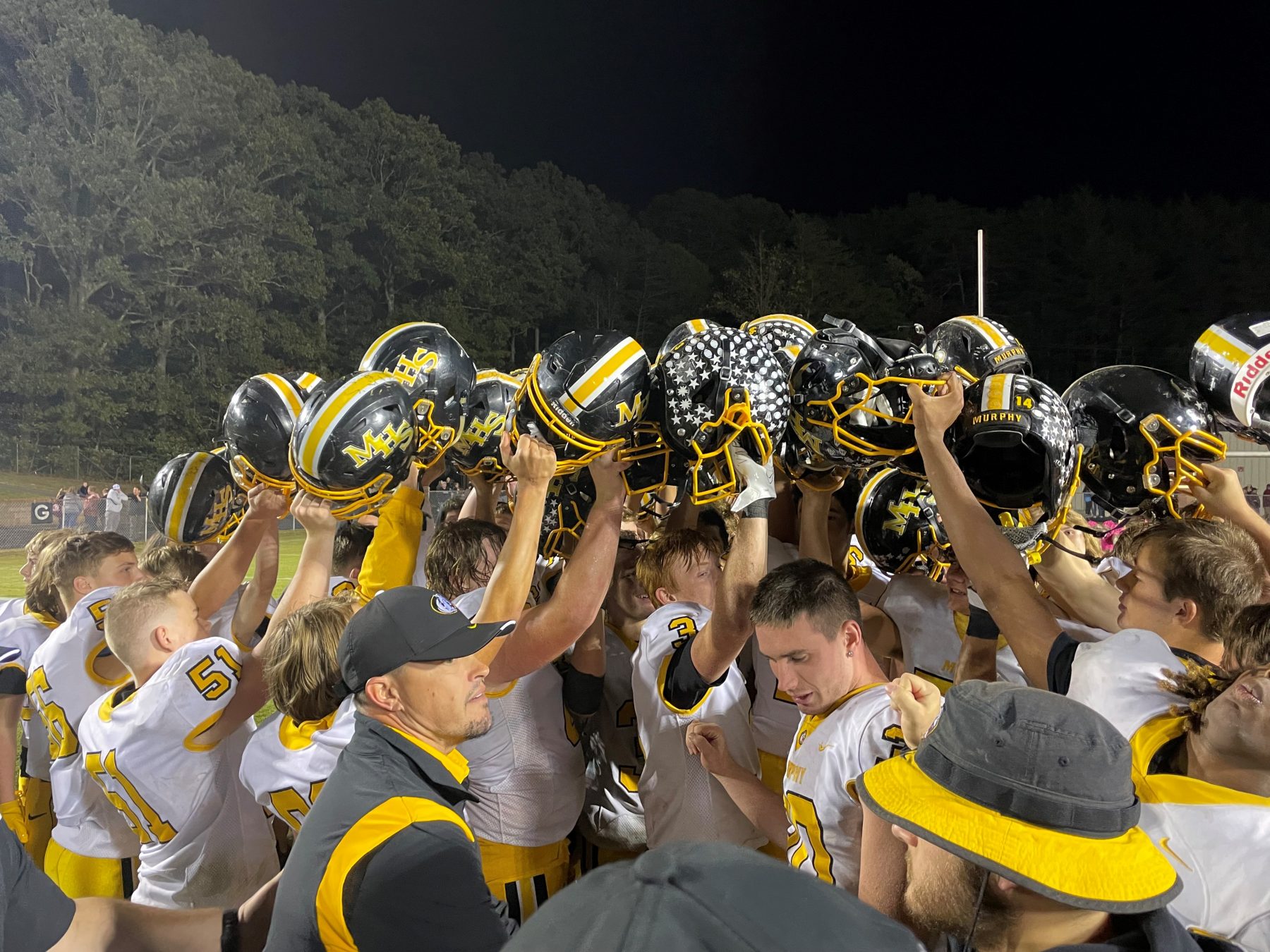 (Bryson City) – – The Murphy at Swain game made me want to rewrite the Charlie Daniels song Devil Went Down to Georgia. Swain County laid the gold football at the Bulldogs feet in light of the excellent running of Juan (not Johnny) Allen and Quarterback keepers from Kellen Rumfelt, which took the momentum away from the Maroon Devils. Late the in the game passing would be key for both teams to make big plays and keep fans dancing and on the edge of their seats. The later lyric in the song the Bulldogs wanted to rewrite is Granny do the Bulldogs Bite, yes child yes. The bite was in defense. Swain County had its bites as well into the Murphy offense. Just like any Swain versus Murphy game, the winning lyrics came from how physical you could be to place pressure on the offense to make a stop. Maybe it was Hank Williams’ A Country Boy Can Survive that was the theme we needed to rewrite to see who could spit Beech Nut in someone’s eye. . .

Executing, being physical, and being prepared to face your opponent is key for winning the game. “It’s always a hard game when you come here no matter what the records are, not matter what it is.  Anytime you come to Swain County you got to be ready to play. The kids were ready to play. They played their butts off. We are proud of them for that,” Murphy Head Football Coach Joseph Watson stated after the game. Murphy improves to 6-and-3 on the season and 3-and-1 in conference. That keeps the Bulldogs in reach of a conference crown depending on the outcome of a few games this week.

Every time the Maroon Devils rosined up its offensive bow, Murphy gave an evil hiss and band of Bulldogs joined in with defense.  Defense was sorely needed by Murphy in the opening moments of the game. With ease the Maroon Devils went to touchdown town driving 63 yards in 8 plays and 4:27. Carson Taylor made the 4-yard touchdown run look easy. Swain County lost its offensive steam and Murphy was lit up with costly penalties. Murphy tied the score at the end of the First Quarter after being set up on short field position when Hunter Laney recovered a Swain fumble. Juan Allen drained the clock with a 76-yard run and Will Joyner nailed the PAT. End of the First Quarter Murphy 7 Swain County 7. “We played really well. (Murphy) Defense in the second half stopped them (Swain County) every single time they had the ball and made them punt. I am just glad we got it (Hunter’s fumble recovery) and took it back down the field,” Murphy Senior Defender Hunter Laney commented on the Bulldog’s defense.

Murphy’s defense stifled the opening Swain County Offense to begin the second quarter to get the ball at mid-field. Bulldog Quarterback Kellen Rumfelt dazzled the crowd with a number of keepers to place the ball at the 9-yard line. Juan Allen broke a few tackles to get to the end zone and take the lead for good in the first half. Swain made it back to the red zone and Maroon Devil Junior Quarterback Gabe Lillard hit Cooper Hyatt for a 22-yard pass to score another six. Gavin Lanning hit the PAT. When it appeared, the half was over Rumfelt keeps it again and strolls 51-yards to place the final First Half points on the board with Joyner’s PAT. First Half Final Murphy 21 Swain County 14. “It was awesome. It was a hard-fought game. I feel like that is the hardest we have played, and I feel like that is the best offensive full-game we have put together,” Murphy Senior Quarterback Kellen Rumfelt commented on the game.

“I give all the credit to my linemen, especially Kyle Willard. I ran through the hole and hit him in the back. He was holding his blocks, I slipped off and kept going,” Juan Allen credited the Murphy linemen for doing a great job in the trenches.

Defense was key in the Third Quarter as Murphy and Swain County went scoreless. Murphy had all the momentum in the world, especially after Bulldog Tight End Briggs Cornwell advanced the ball on an 18-yard pass reception to the 6 yard line. Swain County extinguished the Murphy momentum will stellar defense causing the Bulldogs to turn the ball over on the 2 yard line. Swain’s offense didn’t make it out of its own territory after the turnover on downs and ended up punting. This exchange of offensive efforts not making the end zone and defense breaking its back to stop the opponent. The Third Quarter was a stalemate that ended Murphy 21 Swain County 14.

Getting to the end zone was fueled by themes for Murphy. That was no different in the Fourth Quarter as the pass from Rumfelt to Senior Receiver Payton McCracken lifted the Bulldogs to scoring position. Deep in Swain County territory Rumfelt completed a 5-yard pass to McCracken for the last Murphy score. Down by 14, Swain County did not give up. The Maroon Devils marched into the red zone to complete a Lillard to Gaige Jones 11-yard pass for a touchdown and Gavin Lanning PAT. Murphy melted the clock on a follow up possession to win the game 28-to-21.

Take-Aways from the Game

Swain County drops to 4-and-3 on the season and 2-and-1 in conference play from the loss to Murphy. The Maroon Devils were a handful for Murphy and were never out of the game. You have to admire the tenacity of Swain County never stopping when in the middle of the Fourth Quarter the score favored the Bulldogs by two touchdowns. A few penalties and missed opportunities may have given the Maroon Devils enough steam to keep the Bulldogs from biting. The offensive efforts gave Swain County more than seven yards per play. The offense stayed on the field a long time, around 36 of the 48 minutes of regulation. Lillard completed 3-of-10 passed. Those passes were choice, because two resulted in touchdowns. Just keep trying to hit Cooper Hyatt and magic would happen for the Maroon Devils. Rushing was huge for Swain County. The Maroon Devils kept Murphy guessing who was moving the ball as the 251 yards in rushing was spread over five different players who had great plays. Swain needed this win to help the team stay fueled to meet up with Robbinsville this coming Tuesday and Cherokee this coming Friday. Three games in seven days may not wear well on any team, especially the three you have to face in this time period.

Murphy was working to recover a heartbreaker of a 23-to-20 loss to Robbinsville this past week. The team had a slow start to practice and needed to build unity within its squad. This game helped build the chemistry it needs to finish out the season strong. People like Kellen Rumfelt and Kyle Willard helped jump start the offense and defense. Rumfelt led the team in rushing for 88 yards on 9 carries. Willard, as Juan Allen pointed out, open the holes, and stop the Maroon Devils. Secondary defenders, like Juan Allen, Hunter Laney, and Payton McCracken sharpened the saw on pass coverage, which broke up at least 6 Swain County pass plays and flew to the ball to recover a fumble. This same grit is going to be helpful next week at Andrews, where the play of choice is rush and a hard-core defense.

Payton McCracken had 8 receptions for 87 yards (One for Touchdown)

Will Johnson had 2 receptions for 65 yards

Cole Laney had 2 reception for 36 yards

Briggs Cornwell had 1 reception for 18 yards

Murphy will travel to Andrews to face the Wildcats. The Wildcats are 5-and-3 on the season and 1-and-3 in conference play after coming off a 24-to-14 loss to the Robbinsville Black Knights at Big Oak Stadium. Swain County will travel to Robbinsville on Tuesday night. Stay connected to Team FYN Sports for previews and game coverage. Team FYN Sports on FYN TV is set to stream the Murphy at Andrews game.