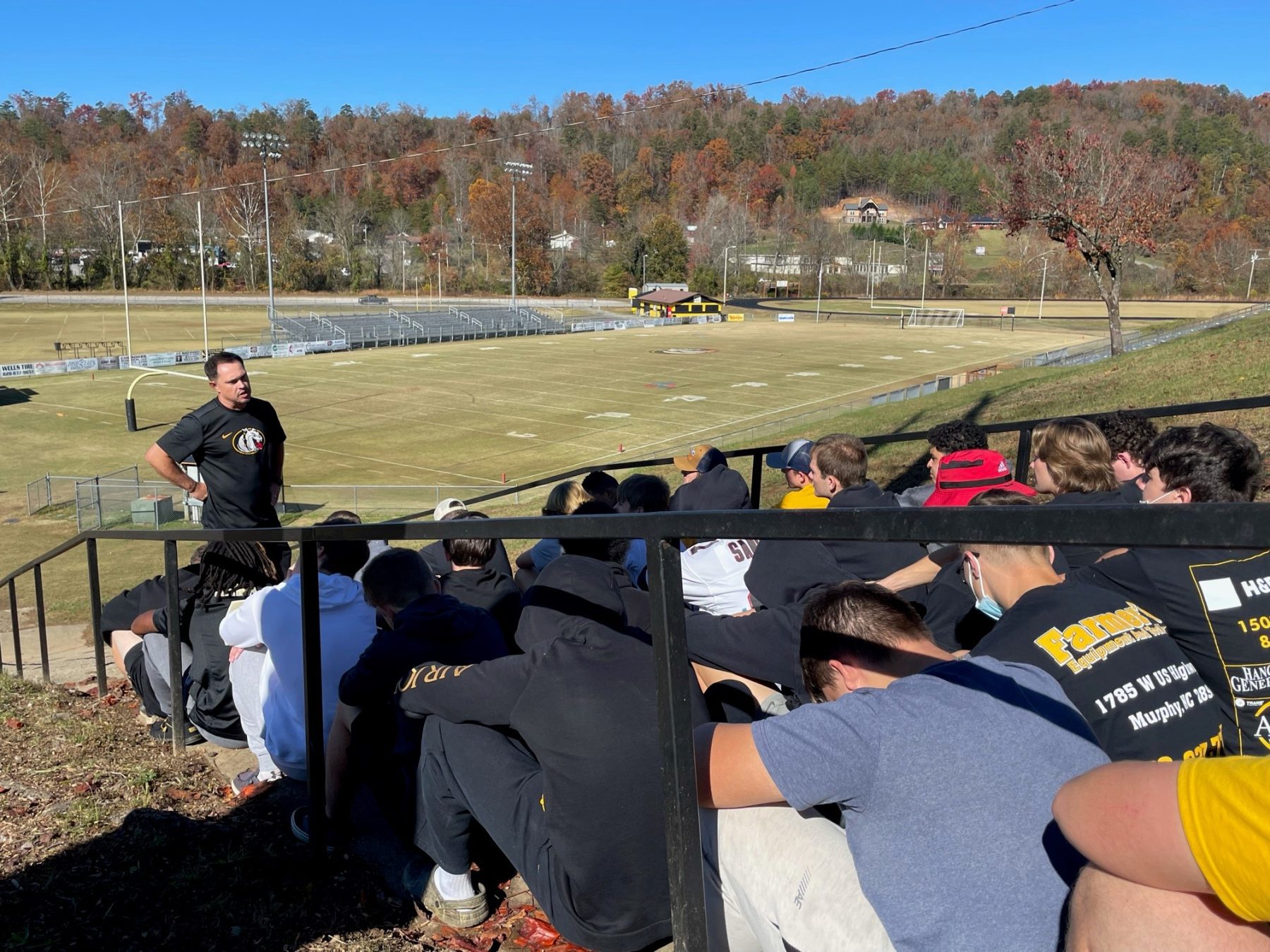 Where the heck is Ramseur, NC

(Ramseur, NC) – – Take a pen and try to pick the center of North Carolina and you are probably going to be within a mile or two of Ramseur, a town not many people know about. Places like Murphy and Manteo are household names. No one ever sings or makes reference, “from Murphy to Ramseur” or “Manteo to Ramseur”. It’s a small town that has been economically depressed and was famous in the late 1960’s when stars like Dick Clark and Merle Haggard made the movie Killers Three or Heidi N. Closet (Who is from Ramseur) won Ru Paul’s Miss Congeniality. It’s football that is making Ramseur very well known with the undefeated Wildcats (10-and-oh). Friday night the Murphy Bulldogs (8-and-4) will make the near 5-hour big bus ride to take on the Number One seeded Eastern Randolph High School.

Eastern Randolph is number one for a reason. The Wildcats are big, with the average lineman standing around 6’2 and weighing 290 pounds. Even the quarterback, Stratton Barwick is 6’1 and 240 pounds. Eastern Randolph has a team that averages 40 points scored per game and the defense gave up an average of 8 points per game. Big size is a good asset to have if you play football. In addition to size, this team is quick to move off the ball. It’s not the fastest team in North Carolina and the competition in the conference has been down this season. Most teams in this region appear like they only practice offense and make it up as they go along on defense. The Wildcats have one of the best defenses in the region, which means they do well, but don’t seem to have a good flow or exercise specific techniques. They find the ball and tackle you.

You have to dig for stats on this team and what you find is not really comprehensive. To make determinations you have to watch film, and lots of it. What you see is a team that likes to run spread offense and appears to be linear. What I mean is this team runs the ball about 80 percent of the time and the plays are usually a dive, trap, isolation, or counter to the right. Senior Halfback Nahiem Lilly (5’9 and 200 pounds) is the favored runner. Quarterback Barwick likes to call his own number and can get good yardage on designed QB run plays. When Barwick is called on to make a pass play, he does not appear to check his options and has a telegraphic stare telling the opponent where he is throwing the pass. You may know where he is passing, but he generally hits his receiver with laser-like precision. The big offensive line is a little slower than you would expect. Being slow may give Murphy an opportunity to place pressure on the corners with ends and linebackers to squeeze the Wildcats up the middle, which will play into the Bulldogs hands.

The Wildcat defense will be big and fierce. There are not many players that play the mountain iron-man football, where you have a position on offense and defense. The defense, with the exception of people like Malachi Letterlough, who plays running back and linebacker. The defense will stack up in a 4-4 defense and watch for Murphy’s pass in a Cover-Three. The defense is scrappy and very reactive. When interviewing some coaches in the area Triad area, they state most teams who have competed against Eastern Randolph have only seen spread offenses. The Wing-T offense may be new to the Wildcats and keep them on their toes.

How do the Bulldogs feel about this game?

There are some opportunities for the Murphy Bulldogs to enjoy some success against the Eastern Randolph Wildcats. Let’s be blunt, they are good, athletic, big, well-coach, and undefeated. “So that is the kind of team you expect to see in the third round of the state playoffs. They (Eastern Randolph) are going to be a challenge. But we are up for it,” Murphy Head Football Coach Joseph Watson stated after practice this week. Listen to his full comments here.

Defense is going to be key for this game. Murphy Linebacker Ty Laney agrees with Coach Watson about the physical and athletic nature of the Wildcats. “They pass the ball and run. It’s like a mix. We have to cover the pass and stop the run. Defense is going to be huge. And we have to do our best all season. Defense wins championships. Just get on them early and fast. We have to hit them first before they hit us,” Laney says. It may be simple sounding but executing against the Wildcats will be tough. They are fast to get off the ball and start the play, but not the fastest after the snap.

The big bus ride of five hours traveling and stopping can wear on players. During the last few years dating back to the end of 2017, Murphy has generally won the big bus ride games, including a couple of 1-A state championships. Senior Quarterback Kellen Rumfelt says after you get off the bus the Bulldogs will get down to business. “They (Eastern Randolph) are undefeated; they are a really good football team; and they have some big kids and really good athletes. But I don’t think they have had to fight a team like us all year. It helps us out that they run a 4-4 (defense) and we have to be prepared for anything. Each team likes to throw a curve ball at you,” Rumfelt stated after practice this week.

The Trip to Ramseur

Take the trip with the Bulldogs. It will be a long day. See them off from Murphy High School at 8:30 AM. By early afternoon, the Bulldogs will have the opportunity to do a walk-through practice and eat at Wake Forest University’s Truist Stadium in Winston Salem. If you can’t make the game stay connected with Team FYN Sports on Facebook as we will provide updates and some short video of the game.