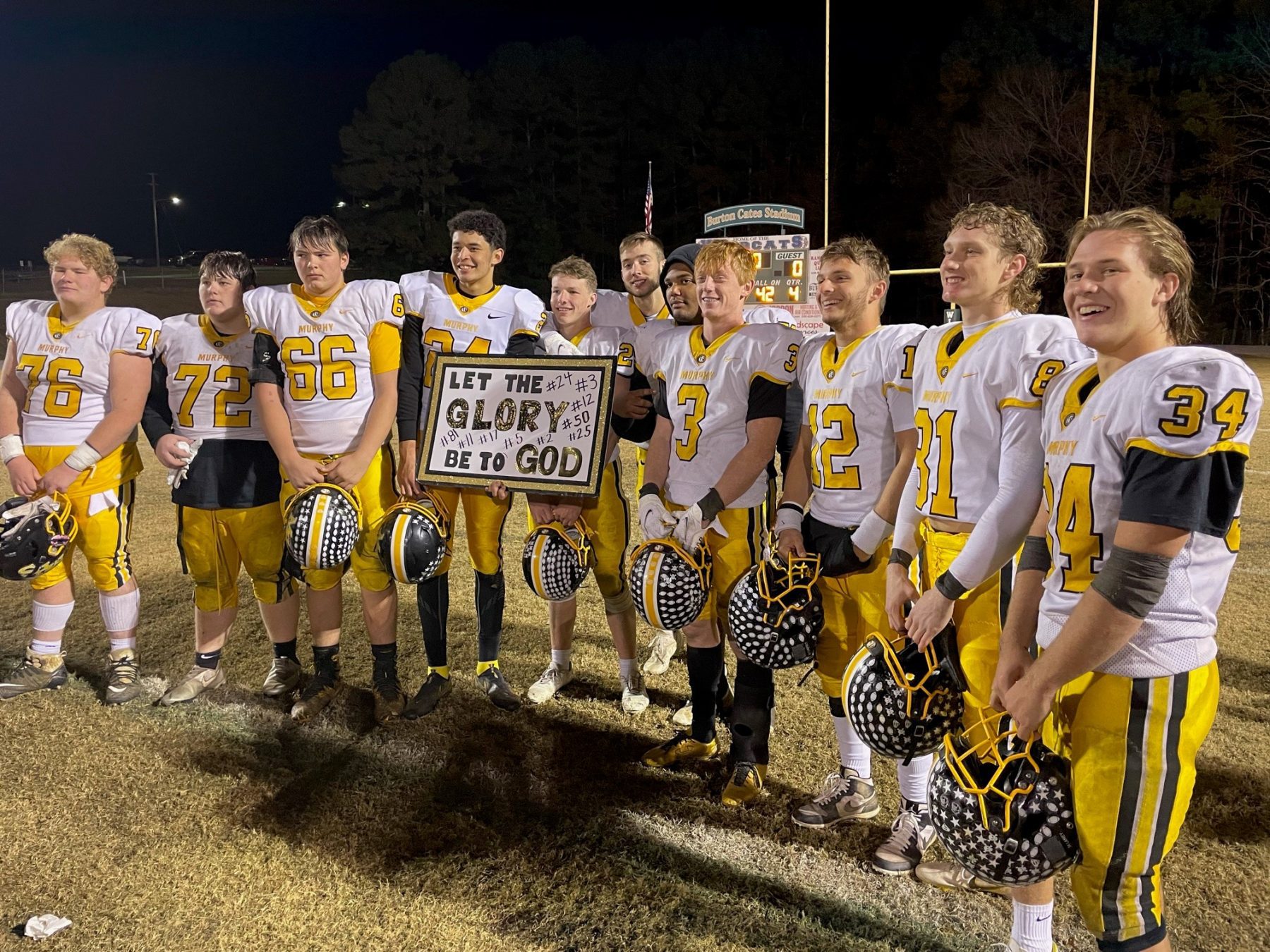 Onward to Big Oaks to face the Robbinsville Black Knights

(Ramseur, NC) – – Grab your sock and hose and pull! Number 9 seed Murphy (9-and-4) has thrashed its opponent and is moving to the fourth round of the state playoffs by upsetting number one see Eastern Randolph (10-and-1). The final score is Murphy 64 Eastern Randolph 31. The night belonged to the Bulldogs who could not be stopped by the Wildcats.  There wasn’t a single superstar among the Bulldogs, which makes you believe in the potential Murphy has had from the beginning of the season is real. Murphy Running Backs Ty Laney, Juan Allen, and Hunter Stalcup burnt up the field running and catching to build a score that should have started a rolling clock in the second half. The offensive front line, on too many occasions in this game opened holes wide enough to drive a Cherokee Boys Club bus through.

A few times the Eastern Randolph Wildcats would get a big pass play and run a few touchdowns and show its strength. The Wildcats constantly stood in the shadow of the Murphy defense and offense. The game was filled with too many costly turnovers and mistakes by Eastern Randolph and could not show its prowess. That don’t win ballgames. Fact is Murphy was probably the best team the Wildcats have faced this season. The game proved Murphy Wing-T was an offense they had never seen before. Murphy on most occasions had Kyle Willard, Rylan Smith, Joe Swain, and the rest of the Bulldog front line hitting the Wildcats before they could get off the ball. By the beginning of the fourth quarter, the game was over. The Bulldog defensive secondary also had big stops. For a second straight game Hunter Laney grabbed an interception along with Juan Allen. Murphy had to find ways to melt the clock. By the 6:00 mark of the fourth quarter, you could players, fans, and coaches on both sides wanting to get this game to come to an end, go get warm, and find a late dinner.

“Super proud of the kids. They played their butts off tonight. It was an outstanding effort right off the bat. They were ready to play and ready to show what we were. They came down here to play a team that we had not played before,” Murphy Head Football Coach Watson said after the game. Watson added it was a great and physical demonstration by the offensive front line and defense that won the game. See Coach Watsons additional comments here.

Watching the first quarter one may think the game would be close and paced by trading touchdowns. The difference was made by Murphy’s defense and Eastern Randolph turnovers that would make that a poor assumption. There were only three lead changes in the game, two of which took place in the First Quarter. Eastern Randolph drifted slowly down to the one yard line to eventually push Running Back Nahiem Lilly into the end zone with 7:53 left to go in the first quarter. Yane Jaimes put up the point-after kick. Murphy pushed its way across the field very swiftly on several Ty Laney carries. The Bulldogs put Juan Allen into touchdown town on a 5-yard play and let Ty Laney lose on a 2-point conversion run to end the quarter Murphy 8 Eastern Randolph 7.

Eastern Randolph took the lead for the last time with a 27 yard field goal from Yane Jaimes with 10 minutes left to go in the Second Quarter. With 7:05 left to go in the first half Ty Laney was on fire running the ball and coasted into for Murphy’s second touchdown from 39 yards out. The Wildcats moved the ball about 16 yards on its next possession before throwing an interception to Ty Laney, which set up a 3-yard touchdown run for Hunter Stalcup. Quarterback Kellen Rumfelt hit Payton McCracken for a 2-point conversion to give Murphy a 12 point lead. A five-yard pass play to Will Johnson in the end zone ended the first half. Will Joyner nailed the point-after kick. End of the first half Murphy 29 Eastern Randolph 10.

Murphy started a little slow to start the second half and its first possession ended with a punt. Defense gave assist to a touchdown when 6’3 Hunter Laney intercepted Eastern Randolph and took off on a 57-yard sprint up the field. Hunter’s pick set up an 18-yard touchdown run by Ty Laney and a Will Joyner PAT. The Wildcats thought it had momentum going again with a touchdown run by Nahiem Lilly and point-after by Yane Jaimes 21 seconds later. Murphy’s next possession stuck gold again with a 21-yard touchdown pass play from Rumfelt to Allen and a Will Joyner PAT. With 2:43 remaining in the quarter, Hunter Stalcup strutted 60 yards for the final score of the quarter and a Will Joyner PAT to make the score Murphy 50 Eastern Randolph 17

Rolling into the Fourth Quarter, fatigue started to set in for both sides and Eastern Randolph could not advance against Murphy. Juan Allen made his final touchdown run for 18 yards. Penalty markers moved the ball back and forth two times until Will Joyner kicked the PAT. At 6:52 remaining Eastern Randolph scored with a 5-yard run by Nahiem Lilly and a 2-point conversion by Elias Alston. With time winding down to 1:55 Jonah Hedden scampered to the end zone for Murphy 8 yards out for Murphy’s final score. The Wildcats would use Alston one more time to score less than a minute later, which was too little too late. Final score Murphy 64 Eastern Randolph 31.

Being physical and mentally tough through the entire game helped the Murphy Bulldogs finish the drill. “We were very physical the whole game. We knew that is what we had to do to win. We did it every single play and it worked out well. It is the best game I have ever seen the O line play. I have been playing with those guys since JVs. It’s the best game I have ever seen Ty Laney have,” Murphy Quarterback Kellen Rumfelt stated after the game.

The expectations for this game were high to perform and knowing what kind of team Eastern Randolph is set the tone for preparations for the Murphy Bulldogs. “You know it was a great ballgame. We knew we were going to have to fight coming into this game. It (Eastern Randolph) is a really good team that we just played. I thought we came out and executed. The defense is playing well, and we are doing the little things correct. And that is what we have placed focus on the last few weeks,” Murphy Wide Receiver Payton McCracken said in the postgame comments.

There is an obvious difference between the style of play between Eastern Randolph and Murphy. Murphy Running Back/Linebacker Ty Laney emphasized the point of difference. “We showed them what mountain football is all about. That’s what we are – Murphy. The offensive line did amazing. They opened the hole up and it was there for me. I could not have done it without them. They (Eastern Randolph) were pretty big, very fast and athletic. But we showed them what we are. That’s all we had to do,” Laney said outside the locker room.

On to Round Four (Elite Eight) to face Robbinsville

Mentioning the game with Robbinsville on the upcoming “Black” Friday with Murphy players and fans brings some mixed emotions and reactions. There is a sound of dread and excitement from games that have been played in the last two years at Big Oaks Stadium that have brought fans and players to their feet and caused some tears. Murphy was looking for one more home game if North Rowan had upset the Black Knights. It is well-known Robbinsville is not the same team it was few weeks ago when it came to Murphy. Many Black Knights that were side-lined are healthy and playing well. Robbinsville has been dominating its opponents and rolling through the playoffs just like Murphy. “At least it is a shorter trip next week. We are happy about that. We are excited to continue to be playing to be going to the next round,” Coach Watson commented about the upcoming game with Robbinsville. Stay connected with Team FYN Sports for a game preview.