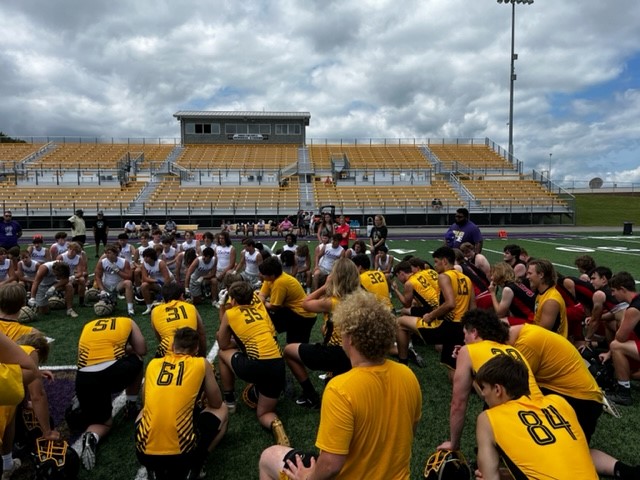 (Blairsville, GA) – – During the spring when you pull out the lawn mower, weed trimmer, or leaf blower that has been in storage for seven months, give or take, you hope it cranks and does not need a lot of maintenance.  That’s how some of the coaches felt at Thursday’s High School Seven-on-Seven Football meet at Union County (Ga) High.  Andrews Coach James Phillips seemed to get the Wildcats roaring on the first pull.  Murphy Coach Joseph Watson got the Bulldogs moving with a few pulls in choke and had a few misfires leading his team to a tie with Andrews and Union County.  Union County Coach Michael Perry will need to visit the football-mechanic for some work as the Panthers did not have a purring motor.  Most of the players from all teams have put in their time during the winter and early spring in other sports ranging from wrestling and basketball to track and baseball or spent a good amount of time in the weight room.  Getting back into the groove wore down all three teams.

What is a Seven-on-Seven

We wanted to remind you about the Seven-on-Seven games.  Each game is usually 30 minutes with a rolling clock.  Each team brings its running backs, wide receivers, and quarterback totaling seven players each side.  The defense is comprised of linebackers, corner backs, and safeties.  The ball is placed on the 40-yard line, closest to the endzone where the offensive team will emphasize passing and route running.  There are no pads, only helmets, t-shirt, and shorts.  The players are downed by a one or two-handed tag, depending on the rules adopted by the coaches.  There are no field goals, only two-point conversion attempts.  The goal is to identify areas that need improvement and build on the team strengths.

It is very obvious the good 2021 season, outstanding young talent has matured to be a team of seasoned veteran players that have good chemistry.  Wildcat Quarterback Donovan Bateman demonstrated he has great passing skills and can read the now senior-laden team which will be anchored by running backs Isaac Weaver and Austin Martin, wide receivers Andy Tathum and Cole Anderson.  When the line comes to practice, it will be led by seniors like Drew Martin.  Flipping these Wildcats to the other side of the line, the defense smothered any attempt the Union County Panthers tried to post.  Andrews scored 31 points to Union County’s 6.  This same defense held Murphy to 8 points.  The Wildcats had its trouble with Murphy’s defense, which intercepted and caused trouble for Andrews to advance to touchdown town.  When Andrews and Murphy meet in the fall season, barring major injuries, that will be a game you don’t want to miss.

Wildcat Quarterback Donovan Bateman is well pleased with his team’s performance.  “I thought we did pretty good as a whole.  Everybody (the Wildcats) came out to play, ready to compete.  And I thought we handles ourselves pretty good today.  Murphy and Union play different styles from each other.  The first game (against Union) we came out ready to play.  They made catches and played well.  The second game (with Murphy) we didn’t execute as well as I expected.  We were competitive and we will be fine,” Bateman explained after the meet.  You can see Bateman’s full interview comments at the link in this story.

The Wildcats are taking great pride for outstanding execution in the first game with Union Co High and worried a little more on some sloppy play with Murphy in the second game according to Andrews Head Football Coach James Phillips.   The goal for Coach Phillips in this first meeting is to “get some rust knocked off.”  Coach Phillips gave kudos to his team saying, “They (the Wildcats) have had a really good off season.  They have worked hard in the weight room and their speed and quickness development.  Cole Anderson (Wide Receiver) is a kid that had a huge day for us with several catches.  Last year he may have had only five catches combined through the whole season.”  Coach Phillips interview can be seen at the link in this article.

The number of talented Murphy Seniors (Class of 2022) that left, makes one wonder if the Bulldogs will be able to replace the talent that posted an outstanding season for 2021 (9-and-5).  The answer is “certainly.”  More rough than smooth for the expectations of coaches and players in this week’s seven-on-seven.

New Starting Bulldog Quarterback Cole Laney has the arm and has the eye for the target.  During the spring, balancing the end of basketball and baseball, you could find Cole in the gym working on his skills to take over the QB position.  Most of the time we would see Laney take over in the last minutes of a blow out or give Kellen Rumfelt a rest or a time for convalesce, and you could tell he was a bit shaky in the pocket.  Not so this year.

The greater task it appears is getting reps to the veterans to maintain their excellent work and kick up some spirit in the new players and rookies.  Dialing in a pass from Laney was good, but tight-end Will Johnson and some inexperienced players like the mega-tall (6’5) Dominick Rummler need a few more reps to perfect their ability to bring the ball into the breadbasket.  Rummler, with some good work and time, will make Murphy fans proud.  He has an enormous reach and decent hands.  Some other basketball types who are putting on the cleats are Zack Skogen and Will Carringer, which will give Murphy some speed.  Seniors Ty Laney and John Ledford should provide good running and defense.  They made good passing targets for Cole Laney or intercepting the ball from Donovan Bateman (Andrews QB) and Caden Tanner (Union Co QB).

Murphy Quarterback Cole Laney said the whole event was a great learning tool.  “I think we learned a lot.  I think this was a good experience for us to do better.  We can take this and go to another seven-on-seven and go into the season learning a lot.  We need to catch the ball a little bit better.  We need to throw the ball a little bit better.  We did pretty good on defense and we flew around pretty good today,” Laney stated after the meet.  Cole Laney’s interview can be seen at the link in this story.

This is the first seven-on-seven and Murphy Head Football Coach Joseph Watson says the Bulldogs have some area to improve and he saw promising parts of the competition that has him in good spirits for the team’s development.  After the competition Coach Watson said, “There is a lot to work on.  It’s early in the summer.  It’s our first seven-on-seven. We saw some bright things and some things we want to improve on obviously.  Defense looked good at time.  Offense looked good at times.  But, not all the time.”  Coach Watson’s full interview can be seen at the link in this story.  The Murphy Bulldogs will attend three more seven-on-seven events before starting the season.

Union County coaches were not pleased with the Panther performance.  The Panther’s central offensive line was in knee braces recovering from surgery or injury.  Quarterback Caden Tanner and Center Jensen Goble struggled a bit dealing with their recovery and hindered by the leg braces.  Union County Head Football Coach Michael Perry told us this is not the reason for a less than desired performance.  Offensive and defense clearly need some enthusiasm to get into the meet and work on correcting mistakes.

“It was ugly.  We have to got to get a lot better.  The biggest thing that we got improve is there is no energy at all.  We were content when things went wrong.  We couldn’t bounce back.  That’s the great thing about sports.  We have another opportunity to play Murphy and to get that (enthusiasm) going,” Coach Perry stated after the meet.  The Division/Region competition for Union County has been newly realigned.  There are only two teams from 2021 that will face Union County, which include Banks and Fannin County.  Coach Perry’s comments can be seen at the link in this story. 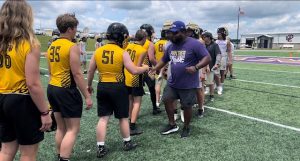 Murphy Bulldogs have an opportunity to shake hands with a familiar face, Coach Thomas Nelson