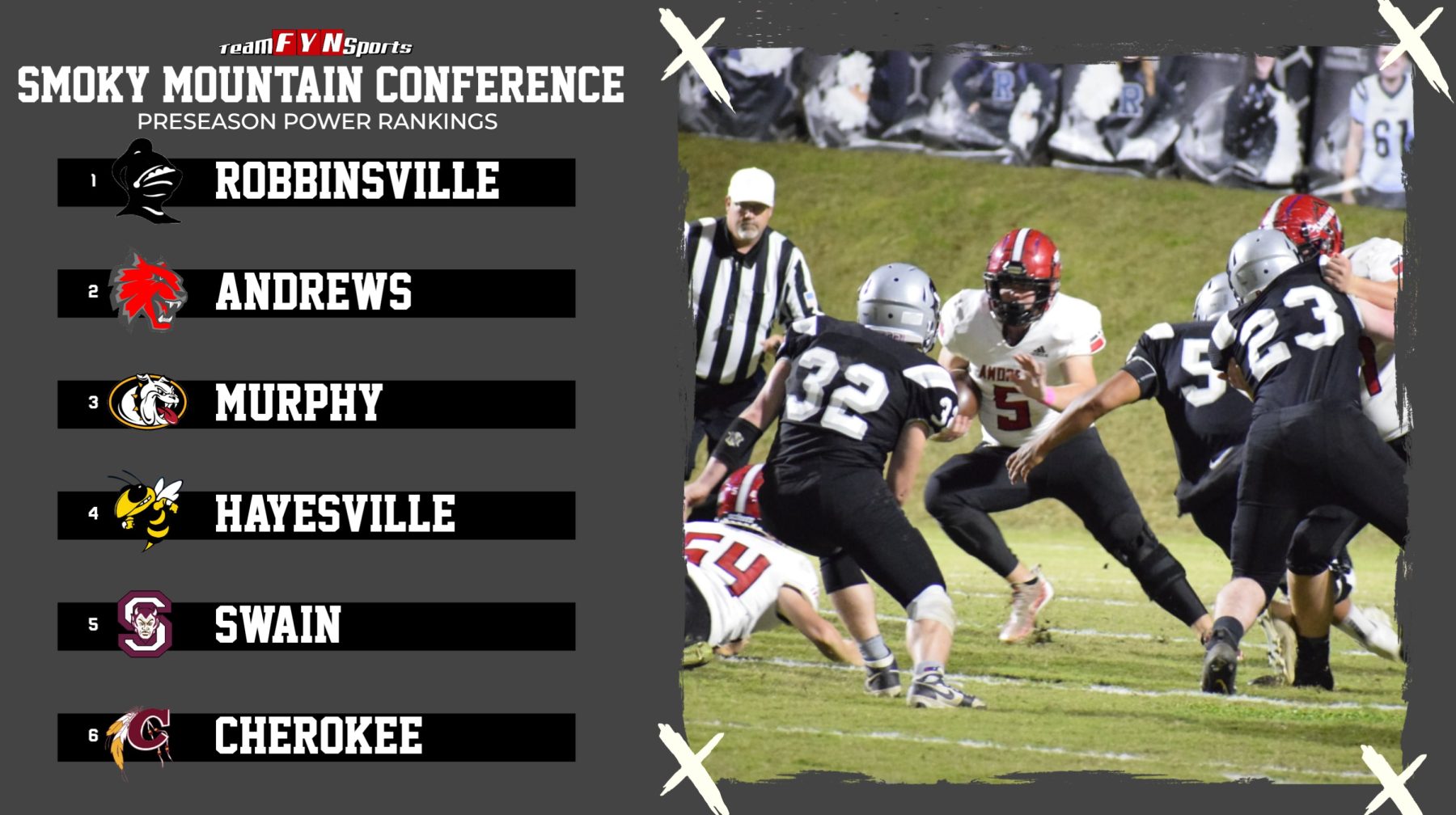 It’s about that time! We are only a handful of days away from seeing our favorite teams from the top conference in the state of North Carolina put toe to rubber and officially kick off the 2022 football season. This year is shaping up to be one of the most competitive season’s from top to bottom in the Smoky Mountain Conference that we’ve seen in recent memory. Let’s take a look at some predictions, some note-worthy games, and some players to watch as the season unfolds.

Maybe the hardest preseason predictions I have ever had to make. There are a ton of unknowns heading into the 2022 season. What will Swain County look like with Sherman Holt at the helm? How does Cherokee replace a superstar like Donald Bradley? Can Andrews stay healthy enough to make a deep run? How does Robbinsville handle their third Quarterback change in as many seasons?

Even with all of those questions, you can get a good idea about how good a team will be by looking at who they’re bringing back, and that’s the number 1 reason why Robbinsville sits at the top of this list.

Robbinsville returns 5 offensive starters and 5 defensive starters from last year’s Western Regional Championship runner-up team, and they also get at least one more year of Head Coach Dee Walsh at the helm. With all of the coaching changes that have happened in the SMC in the last few years, having Walsh return for his 18th year gives Robbinsville a bit of an edge from the jump, and a very good chance at making it 4 SMC Titles in a row.

Cuttler Adams was last years FYN Sports Player Of The Year for a reason, and he should put up even better numbers this year. The do-it-all back rushed for over 2,000 yards and accounted for over 30 touchdowns, even while missing some time due to injury. With his running mate Kage Williams still recovering from shoulder surgery, Adams workload will increase even more in 2022. Williams will be sorely missed on the defensive side of the ball, and that could be the only hole the Knights have to fill heading into the new season. Obviously they will be working with their 3rd starting quarterback in as many seasons, but from what I’ve heard this summer, Donovan Carpenter should slide in and fill that role nicely.

One could make a very valid argument that Andrews should be favored to win the conference this year as they return all but 1 starter from last year’s team. The main problem I have with putting Andrews in the number 1 spot, is the same problem that’s always surrounded Andrews. Their depth. Being one of the smallest schools in 1A football, Andrews fields a team of about 20-25 kids. This year’s numbers could go up given their recent success, but it’s still a concern as to whether or not they can remain fully healthy for all 10 regular season games. Andrews showed they were building something special last season, and if they are able to keep their main core healthy heading into their final two games of the season against Robbinsville and Murphy, they may very well find themselves at the top of this list when it’s all said and done.

Isaac Weaver and Austin Martin will account for most of the Cat’s offense in 2022 just as they did in 2021, but I wouldn’t be surprised if Head Coach James Phillips gives his quarterback, Donovan Bateman, some opportunities to put the ball in the air. The Wildcats have some solid receivers returning, and if they can threaten to hurt you through the air even a little bit, they will be a tough out for most teams this Fall.

The Dogs will enter into their second year with Head Coach Joseph Watson at the helm, and he and his staff will have their toughest challenge yet. Although they return 8 defensive starters, they have some huge holes to fill in the defensive backfield. Juan Allen and Payton McCracken were perhaps the best DB duo the SMC has seen in a while, and they won’t be easily replaced. Luckily for Murphy, they return most of their “Big Dawgs” upfront on the Oline and Dline. That, along with a solid core of running backs in Ty Laney, Hunter Stalcup, and John Ledford, should help them claw their way back in the mix at the top of the SMC once again.

Cole Laney will take over the reigns as starting quarterback for the Black and Gold, and he has shown a lot of promise this summer. Cole has earned the trust of his teammates and they back him 100%, which says a lot about the type of leader he is. Cole has the arm to help the Dogs get it done this year, and it will be interesting to see who emerges as his top target.

The Yellow Jackets bring back maybe the top quarterback in the conference in Logan Caldwell,  and luckily for the rising Senior his top 2 receivers from last season return alongside him. Kyle Lunsford and Taylor McClure combined for over 1,200 of Caldwell’s 2,302 passing yards last year, and the trio will look to maintain that same connection in 2022. Offense hasn’t necessarily been the reason for the Jackets struggles as of late however, as they gave up a whopping 35 points per game last year. As Senior Avery Leatherwood returns from injury, perhaps he and Taylor McClure can help sure up an otherwise shaky defense.

Another year of experience, a favorable non-conference schedule, and perhaps the best line the Hive has seen in years, should make for a fun season for Yellow Jacket fans.

Swain County fans may have a heart attack when they look down on the field opening night and see the Devils in a Spread offense instead of the trusty Veer they’ve seen for so long. With Sherman Holt taking over the reigns as Head Coach and coming from a program that liked to throw the ball around, most expect the Maroon Devils to move toward a more pass heavy offense. It seems like Swain has the athletes to make it work, but it’s also going to be a heck of a learning curve for a team returning 6 offensive starters. There’s just too much unknown to put the Maroon Machine any higher than 5th in the preseason rankings, but that’s not to say they won’t climb if they’re able to emulate the high powered offense that Coach Holt expects from his teams.

It’s hard to imagine a Cherokee Braves team without Donald Bradley. He’s been the center piece of their offense for what seems like forever. The impact Bradley had on the game when the ball was in his hands can’t be replicated, but the next guy in line in Kaden “Tso” Smith should do a pretty darn good job. Defense is where the Braves will struggle the most this season. Losing 4 of their top 5 tacklers to graduation, the Braves are going to have to rely heavily on Junior standout Luke Climbingbear to lead their defense. Even though it looks like they’ll be returning 7 starters on paper, the holes that are left seem to just be too big at the moment to put them any higher than 6TH.

PRESEASON PLAYER OF THE YEAR

No individual player on any other team in the conference makes the impact that Cuttler does with the Knights. He’s runs with authority when he’s carrying the rock, and he makes opposing QBs think twice before throwing his way when he’s on defense. Adams has been in our Player of The Year conversation since his Freshman campaign, and I don’t expect things to change anytime soon. 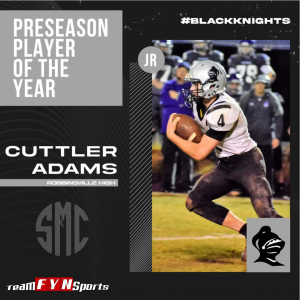 PRESEASON OFFENSIVE PLAYER OF THE YEAR

Caldwell threw for over 2,300 yards last season as a Junior for the Jackets, and he returns for his Senior season looking to get closer to the ever elusive 3,000 yard mark. Caldwell’s top receiving targets return along with an improved line, which is a recipe for a “Heisman” type of year for Logan Caldwell. 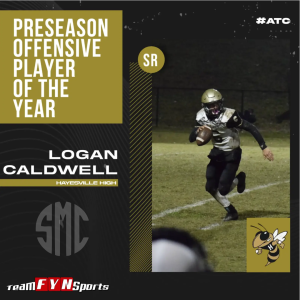 PRESEASON DEFENSIVE PLAYER OF THE YEAR

Brock Adams is a lock in the defensive backfield. He hauled in 7 interceptions last season, and tacked on nearly 60 tackles to go along with it. Each year he’s been a starter, Adams statistics have increased in every category. Adams should shine this year as he steps into a leadership role as a Senior on a talented Black Knights team. 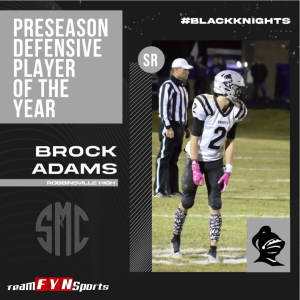 PRESEASON ATHLETE OF THE YEAR

The Swiss-Army Knife that is Isaac Weaver. Not only did he eclipse the 1,000 yard mark on the ground last year, he also led the team in touchdowns, receptions, receiving yards, and interceptions. Weaver is a dynamite player, and if he is able to stay healthy all year, he could cement himself as one of the greatest Wildcats to ever darken the halls of AHS. 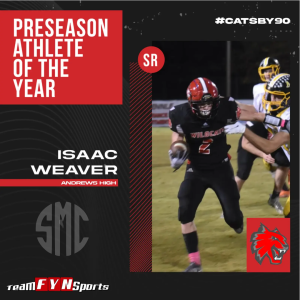