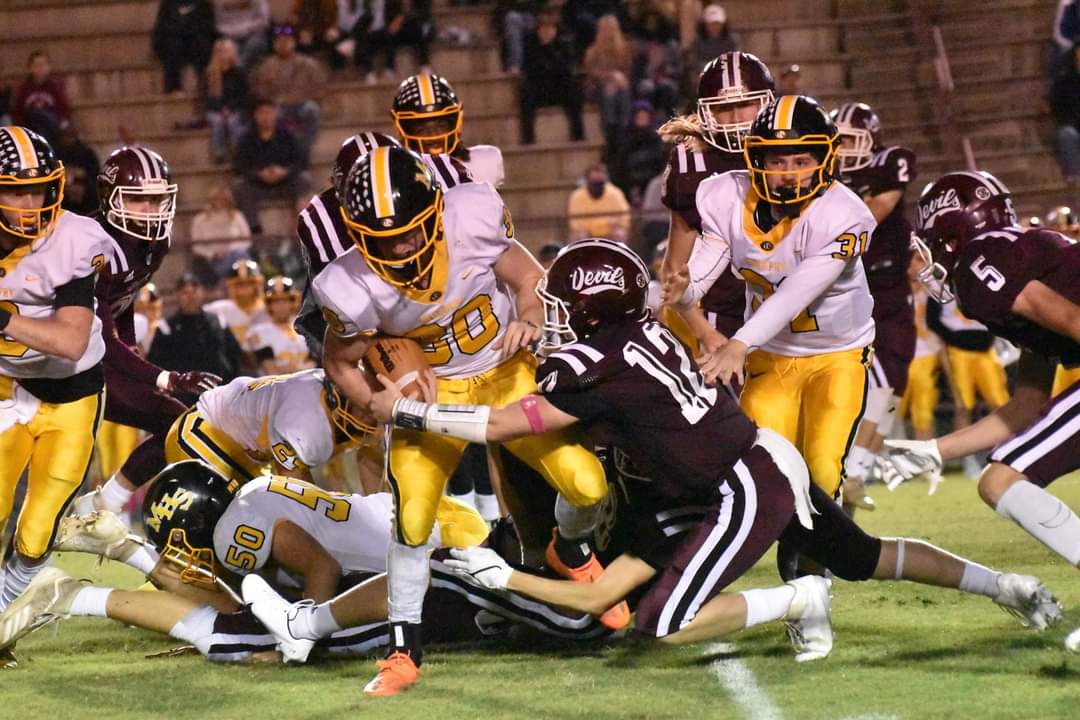 Bulldogs and Maroon Devil Fans Brace for the Best 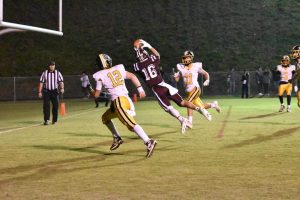 (Murphy) – – The revered meeting between Murphy (6-2, 3-0) and Swain County (3-5, 0-3), the long-time traditional Smoky Mountain Conference grid-iron greats will probably, not be like a church homecoming with cutting pies, songs of praise, and creek baptizings.  This week you hear former players and current fans from Ela (near Bryson City) to Ranger (outside of Murphy) reminiscing about big battles of storied games, winning field goals, players that went on to the play in college and the NFL, and the good-spirited pranks between the coaches.  This game was traditionally the last scheduled event for each team and no matter how good or lack-luster the seasons were going, it has been one of the best rival games in the mountains.  Bulldog and Maroon Devils fans will keep the spirit of this game alive by asking through their chapped lips Friday night “How are my Bulldogs/Maroon Devils going to beat Murphy/Swain?”  Regardless of the last games for these teams, they are working on their schemes to bring the best game they can find this coming Friday (October 21, 2022) night to Bob Hendrix Stadium/David Gentry in Murphy to answer that question and bring a serving of their own smash-mouth home-cooking casseroles to this football pot-lock get-together.

The Maroon Devils are reaching into their cookbook to find the best way to serve up six points down at the table in touchdown town.  Swain County has been on a four-game losing streak since its 14-nothing loss with Dade County, which has been partly due to some costly mistakes and turnovers givings its opponents short-field position.  The Maroon Devils have been sharing time at Quarterback with Reese Winchester, who has not been at 100% and Gabe Lillard, who has been one of the go-to Running Backs, along with Joshua Collins.  Swain delivered a few interceptions to Andrews, which also resulted in a pick-six to Donovan Bateman.  First-year Head Coach Sherman Holt through the season has been working on some new offensive schemes outside of the traditional veer.  Regardless of a few miscues, Swain County is a team with lots of good skills.  Lillard is very capable of passing.  Watch for passes to go to Josiah Glaspie, Nathan Bogdanowicz (Tight End), and Josh Collins.  Collins and Lillard are still team leading rushers and will make the big plays.

Swain’s defense is stacked with big players that are skilled and agile.  Grady Lewis, Ashton Ball, and Nathan Bogdanowicz average 210 pounds.  Bogdanowicz is one of the best two-way players on the entire team at the defensive end and tight end positions.  Swain will probably show a three-man front line with possible 4-4 stack bringing a few more people closer to the box.  The Maroon Devils will drape the outside with Gabe Lillard, Josiah Glaspie and Joshua Collins to cover the anticipated passes.

Swain County Head Football Coach Sherman Holt says the past few weeks the Maroon Devils have been working on getting the team back to its basics and creating success going forward.  Making some decisions to help bring health back to Swain has forced some of the Maroon Devils to step out of position to be the next man up and play in non-traditional spots on the field.  Decision to go with starting Quarterback Reese Winchester or utilize Gab Lillard will be a game-time decision.

The Bulldogs will be lining up to set out casseroles and stew pots of passes, jet and buck sweeps, powers, and traps similar to those sampled in Robbinsville this past Friday night.  Murphy Quarterback Cole Laney and Wide Receivers Cameron Grooms and Trenton Russell lit up the night with 91% pass completions and more than 200 yards of offense to produce four touchdowns.  That dish tasted sweet!  The rest of the pot-lock menu included 309 yards of rushing from Junior Running Back Hunter Stalcup to serve three more touchdowns.  The ole Rinestone Cowboy (Stalcup) has been bringing fans to their feet with quick tempo rushing and eluding defenders.  Since the New Faith Christian Academy game, Murphy has built this recipe to feed the team’s success.  The secret ingredient has been good blocking from the line and sustain attacks defensively from the trenches.  Mason Thrasher went out of the Robbinsville game Friday, but Brayden Killian, Kyle Willard, Ricky Queen, and others stepped up the game.  How do you build on this success?  Murphy Quarterback Cole Laney explains.

The Murphy versus Swain game is one that has lots of memories for people like Head Coach Joseph Watson.  He maintains a picture of senior night in his uniform with his parents walking out on the field.  Coach Watson says it’s a great night and rivalry, but he is working to keep his team focused on eliminating any mistakes, taking care of the ball, and getting the next Smoky Mountain Conference win.