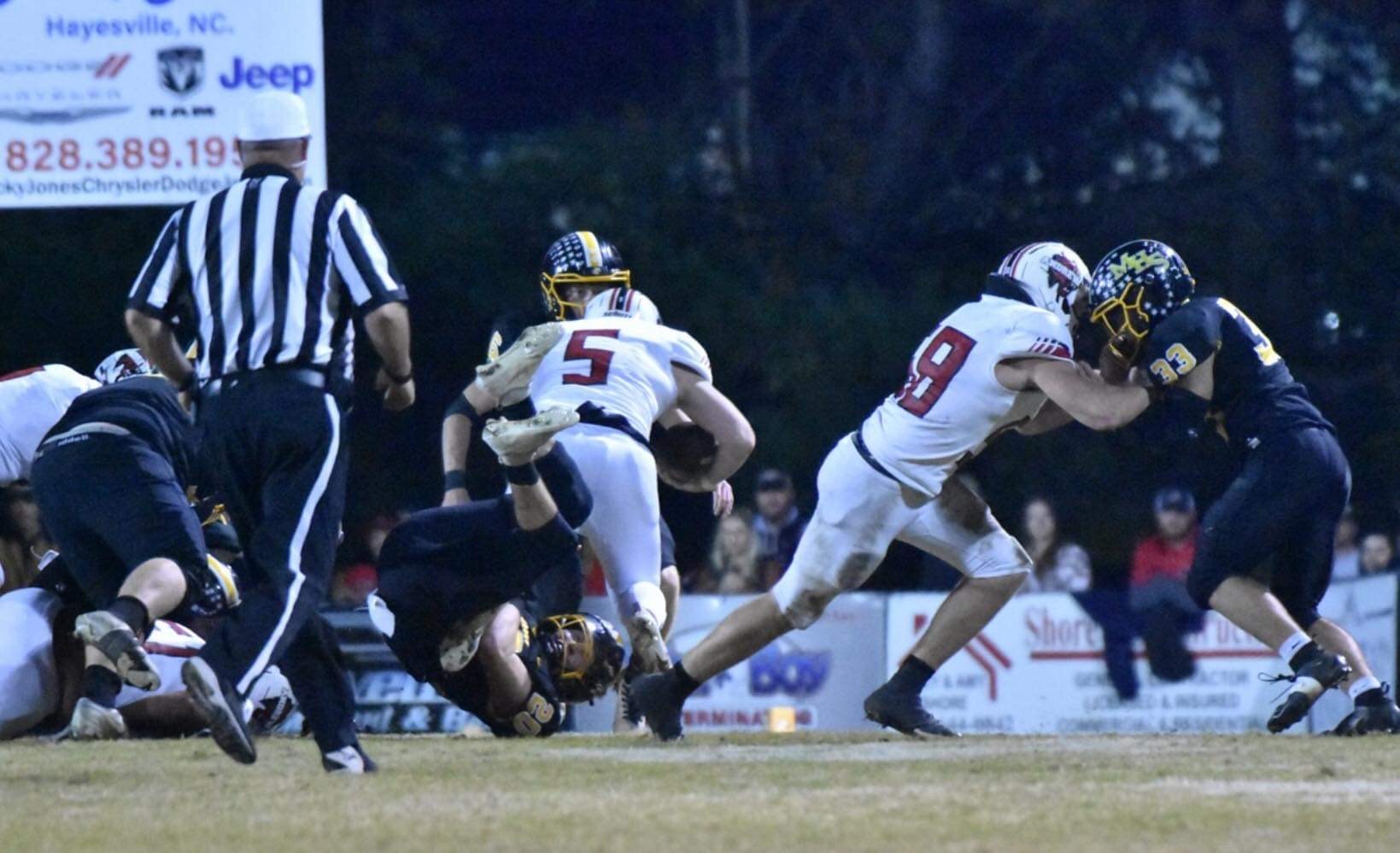 (Murphy) – – The Andrews Wildcats (10-0, 5-0) are the Smoky Mountain Conference Champions after ending the best season in school history.  Andrews defeated the Murphy Bulldogs 42-12 Friday night before a record attendance of Cherokee County high school football fans clad in either Red and White or Black and Gold loud with chants and clanking cow bells.  The Wildcats trailed the Murphy Bulldogs (7-3, 4-1) for only a brief moment Friday night and never looked back after it made their initial touchdown to take the title and to break a near 40-year period of not having a win at Murphy, now Bob Hendrix Stadium/David Gentry Field. 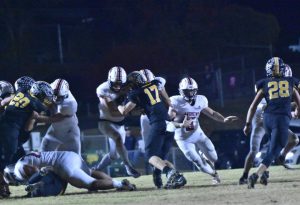 The Wildcats are without a doubt one of the best teams in western North Carolina and take its place with some of the best in recent history.  They proved their prowess by capping off the victory over Murphy in a very efficient manner.  Through some of its recent games, Senior Quarterback Donovan Bateman, Running Backs Isaac Weaver, and Austin Martin roll up big yards burning up the field with speed and strength, but less was more on this night.  Andrews needed only 41 plays, 22 minutes, and 373 yards of offense to slam the door on Murphy.

Turnovers and penalties are the main challenges to killing opportunity to competing with Andrews and capturing the coveted Smoky Mountain Conference Championship.  Smooth as glass, the Bulldogs took the first possession and launched a sweet Cole Laney pass that landed deep into Andrews territory.  A few moments later Laney ran the ball to the end zone for a touchdown.  The Bulldogs could not muster another score for nearly two quarters and ran into problems with turnovers that gave up scoring opportunities.  Murphy struggled to get the running game producing the yards it needed against penalties, interceptions, and a miss-handled punt return that gave the Wildcats optimum field position to score.  Andrews cashed in on the short field positions to either score or stifle the Bulldogs.

3:01 – Andrews burns about 4 minutes of clock working its way up field.  Murphy defense sets the Wildcats back a few times, but eventually finds its way the Bulldog’s 6-yard line.  Senior Running Back Isaac Weaver carries the ball to touchdown town.  Ty Clark nails the PAT.  Andrews takes the lead for good; Andrews 7 Murphy 6

9:44 – The Bulldogs and Wildcats trade possessions and momentum begins to shift as Murphy begins to experience a few setbacks and work to get its running game established.  Deep in its own territory at the 10-yard line.  Donovan Bateman releases a pass to Isaac Weaver that results in a 90-yard touchdown play.  Ty Clark parks the PAT.  Andrews 14 Murphy 6 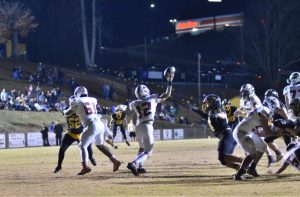 2:30 – Murphy is unable to develop an offensive response and Andrews takes over marching the ball to the Bulldog’s 7-yard line.  Isaac Weaver scores his third touchdown.  Ty Clark is good on the PAT.  Andrews 21 Murphy 6 (Halftime Score).

Andrews will take the opening possession as it won the opening coin toss and deferred to the second half.

1:47 – Now facing the task of having to make up 22 points and making two-point conversions, rather than PATs, Murphy launches its final scoring drive of the night.  The Bulldogs worked to make up lost yards from penalties, Cole Laney hands off to Junior Running Back Hunter Stalcup from the Andrews 13-yard line for its final touchdown of the night.  Murphy missed its two-point conversion.  Andrews 28 Murphy 12. 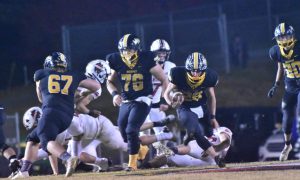 10:10 – Murphy had opportunity to narrow the scoring gap.  It needed a couple of touchdowns and tenacious defense.  Hunter Stalcup began to produce good running yardage, but the Bulldogs were unable to contain the Andrews offensive strikes.  Andrews took over and marched its way to the 3-yard line on some key runs Austin Martin, who eventually delivered the back-breaking fifth touchdown.  Ty Clark handled the PAT.  Andrews 35 Murphy 12 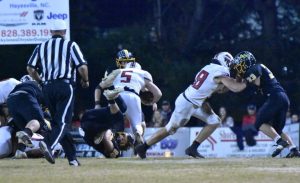 5:38 – Time ran out on the Murphy Bulldogs and Andrews continued to take advantage of turnovers and good field position.  Icing went on the cake for Andrews as Austin Martin went on a 55 yard run to make the final touchdown.  Ty Clark connected on his sixth PAT.  Andrews had the final possession of the game with a little more than a minute to go and went to Victory formation.  FINAL – ANDREWS 42 MURPHY 12

The Andrews Wildcats worked through the game almost flawlessly and with an efficient flow.  Andrews picked up slightly more than 9 yards per carry on rushing attempts, giving it the needed first downs to float to the end zone.  Donovan Bateman launched only a few passes.  His one completion was for gold on a long pass that resulted in a touchdown to Isaac Weaver, the outcome you would hope to see.  It is a coach’s goal and ideal outcome to cap off an undefeated season and conference championship, which had Wildcat Head Coach James Phillips pleased with his team’s performance to and hopeful placement in the upcoming state play-offs.

The Murphy Bulldogs are not pleased with its play, especially against a high performing Andrews Wildcats.  Six turnovers haunted the Bulldogs, of which five came from interceptions and gifted Andrews with excellent field position to build an insurmountable score.  Not pleased with the game, Bulldog Head Football Coach Joseph Watson says there is a new season, the play-offs, to prepare and new opportunity for Murphy.

The North Carolina High School Athletic Association will make its tabulations and formulations for its playoff brackets and post them.  Team FYN Sports will post them as soon as possible.  Andrews and Murphy should have reasonable opportunity to host home games in the early brackets being the number one and number two finishers in the Smoky Mountain Conference.  Where possible Team FYN Sports will cover and stream live games.  Stay connected to Team FYN Sports for our coverage of Smoky Mountain Conference teams in the state play-offs.

Dozer Mashburn had 2 reception2 for 44 yards

Trenton Russell had 1 reception for 26 yards

Cameron Grooms had 3 receptions for 21 yards

Hunter Stalcup had 1 reception for 20 yards

Brayden Killian had 1 reception for 7 yards

John Ledford had 1 reception for 5 yards

Isaac Weaver had 1 reception for 90 yards (1 for touchdown)