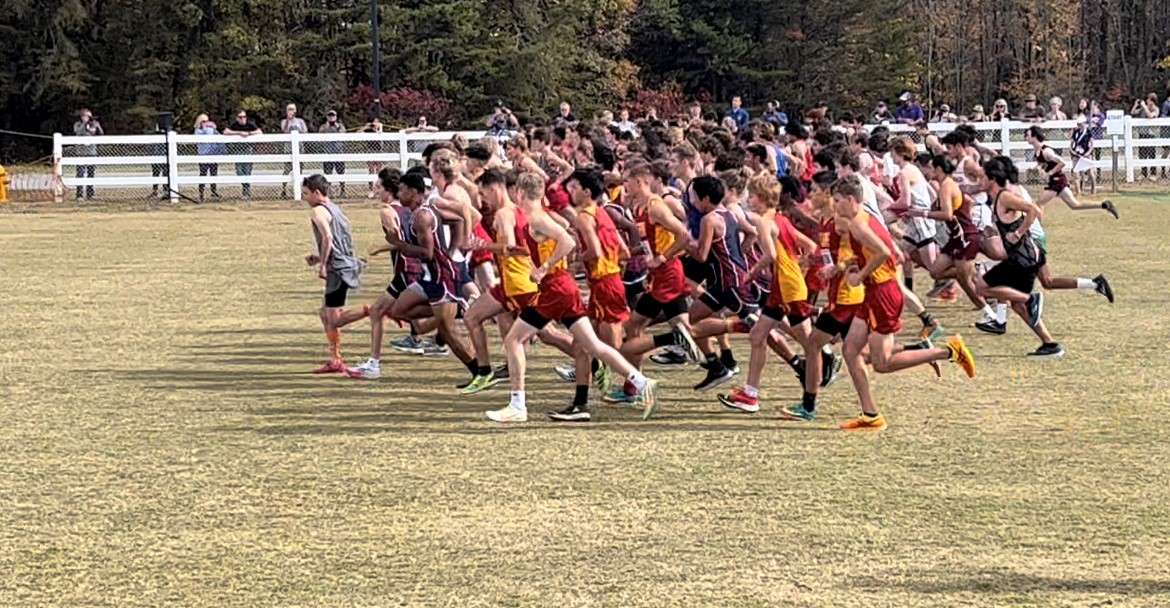 (Kernersville) – – Run! Run! Fast as you can, but this group is not made of gingerbread.  Cherokee Braves Dvdaya Swimmer and Andrews O’Malley Salinas may be faster than the gingerbread man as they crossed the finish line in the women and men’s 2022 North Carolina High School Athletic Association (NCHSAA) State 1-A Cross Country Championship meet way ahead of their respective competition, which included 264 of the best long distance runners in the state.  Swimmer and Salinas are part of 27 cross country runners representing Cherokee, Andrews, Swain, Hayesville, and Hiwassee Dam, 10 percent of the field.  That’s not bad, as there were schools that stretched to the outer banks ready to run.  Cherokee and Swain were winners of the western regional finals that were held in Cherokee at the Kituwah Fields.

There is very little doubt Cherokee High’s Dvdaya Swimmer was not going to take this race.  The buzz around the event course is all about Swimmer, the Freshman from Cherokee and how she has performed this season and would someone outrun her.  The NCHSAA announcer broke open the microphone about 4:00 into the race to say she had taken the lead and was surging.  About 12:00 in the announcement came she had a 30-meter lead and was not slowing down.  When Dvdaya made the long stretch in front of spectators, she had a football field length lead.  The only way to really know where she was in the distance was a cloud of dust.  Swimmer finished in 20:08.83 trailed by Swain County’s Amaya Hicks, who finished at 20:45.01 and Annie Lewis at 20:54.13 in second and third place respectively.  Cherokee also had Junior Letsi Burgos running, who completed the race 32nd in 23:17.32. 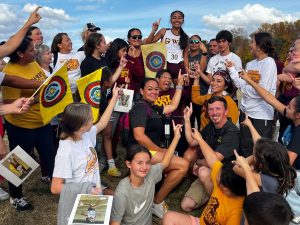 More than a First Place Finish

When Dvdaya Swimmer’s foot hit the finish line as the first place finisher in the state cross country finals there was more than dust and cheers of celebration she earned in Kernersville.  Swimmer returns home to Cherokee as its first Cross Country individual state champion and as she pointed out first woman in the sport to be a champion.  You could feel goosebumps from the proud feelings and congratulations specatators from Cherokee gave Dvdaya.  A Tribal first in the crowd is Peaches Squirrell, who is a member of Cherokee’s first state basketball champinonship team from 1996.  “It’s so cool and I wouldn’t have missed this for the world,” Squirrell said while working her way to get a photo-opp with Swimmer.  The first place finish in the state meet is  pretty cool and was exchausitng for Dvdaya Swimmer.  She is quick to acknowledge the strong Smoky Mountain Conference showing in the meet and support she and her team received this season. 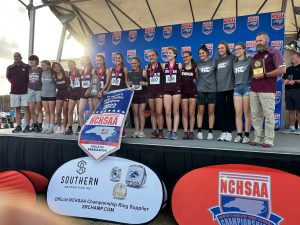 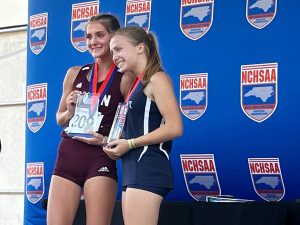 O’Malley Salinas is a skilled young runner that had no problem out pacing the pack of much older and seasoned runners at the state final meet.  You will probably see Salinas appear in this meet as well as many others in the near future.  Much like Swimmer, the state meet announcer made it clear O’Malley had taken a commanding lead did not appear to be in anyone’s reach.  He crossed the finish line at 16:46.83 and it seemed like a short eternity later when Christ the King Catholic School’s Blake Nicholson crossed behind him in second place at 17:01.60.  Third place finisher Andrew Harding of Northside finished nearly a minute later at 17:20.31.

The state final meet is not the last time this season Andrews High’s O’Malley Salinas will run.  While taking a breath from the meet and being congratulated, Salinas praised runners from the Smoky Mountain Conference for a strong appearance in the state meet.

Cherokee is the second place winner as a team in the state meet.  Tyce Hogner lead the Braves to the finish line with a 15th place finish at 17:54.98.  The seven Braves in the meet held down its points to 71 for a three-way tie for first place, something very unusual for a state final meet.  South Stanley took the title and Christ the King came in third in the officials’ final team placement.  The remaining six runners for Cherokee include Aizen Bell (Junior – 20th), Tanin Esquivel (Senior – 22), Jaylan Bark (Senior – 9th), Tanin Esquivel (Senior – 22nd), Oztin Swayney (Senior – 90th), and Ayden Thompson (Senior – 63rd).  Jaylan Bark is the Farm Bureau Insurance Sportsmanship Award. 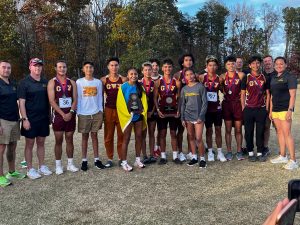 Complete results of the 2022 NCHSAA Women’s 1-A Cross Country State Championship Meet can be found at:

Complete results of the 2022 NCHSAA Men’s 1-A Cross Country State Championship Meet can be found at: