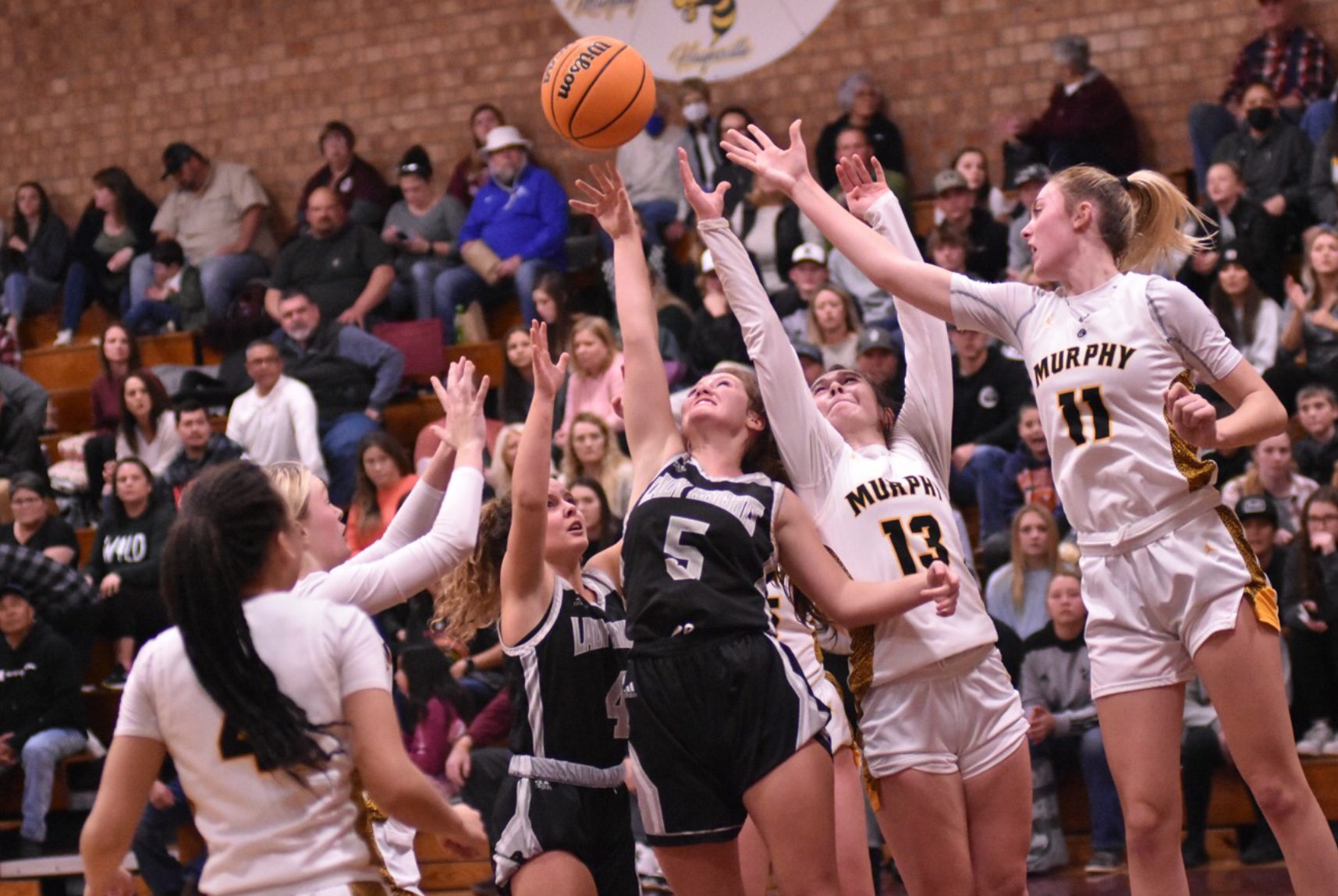 The 2022-2023 basketball season is a blank canvas as of now for our Smoky Mountain Conference athletes. Football has officially ended for all of our teams, and it is now time to take a look a look at who will have their prints all over the canvas that is the basketball world by the season’s end. This article will give you a quick peek at the preseason standings in both the men’s and women’s sides of the SMC, while also shining a light on what individual players you should watch out for the next time you’re in the gym.

Boys Preseason Player of The Year

Adams has proven that he is one of the top basketball players in the conference over his previous three years on the court. This year, he has the opportunity to separate himself from the rest of the pack as the leader of a Black Knight team that should have an opportunity to bring home its first SMC crown since 2014. Adams is a shifty guard who can create space outside and finish with the big boys down low when he needs to, and those two attributes should allow him to put up points on against any team he faces this season. 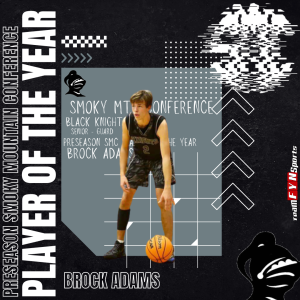 Girls Preseason Player of The Year

Desta has been a pertinent part of the run the Lady Knights have been on over the previous few years. Coming off of a Junior season in which she averaged 20 points, 5 boards, and 5 assists- #4 should blow those numbers out of the water in her senior campaign. With the only other Lady Knight averaging double figures in points per game last season lost to graduation, Trammell will be leaned on offensively even more so than in previous seasons. The way things look right now, the SMC crown is sitting there waiting for Desta and the Lady Knights to come and take it. 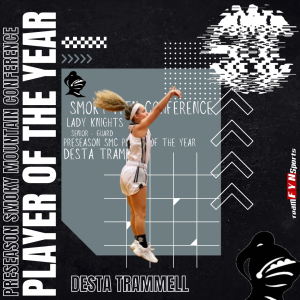 Boys basketball in the Smoky Mountain Conference this year is going to be incredible to watch. There will be so much fluidity within the Conference this year that no team will be able to take a day off, no matter who they’re playing. I think that 4 of the 6 teams in the SMC have a real chance at winning a conference title this year, and if the other 2 can mature on the court quickly, then it could be anybody’s crown. The 2022-2023 season is shaping up to be the best basketball season this conference has seen in a long time.

There’s a new number one on top of the rankings for the first time in a long time. Senior-laden Robbinsville takes the top spot with four out of five starters returning from last year’s squad. Preseason Player of The Year Brock Adams along with brother Bryce Adams, Xander Wachacha, and eventually a healthy Donovan Carpenter headline the five starters for a Black Knight team poised to make a run at their first Conference Championship in 8 years.

Having lost two of the best players in North Carolina in Kolbe Ashe and Jake McTaggart, it’s normal to think we should see some regression from the defending state champion Hayesville Yellow Jackets. Good players come and go, but the one constant that remains year in and year out is Michael Cottrell, and that’s why the Yellow Jackets will still find themselves fighting for the top spot in the SMC. Despite losing 50 percent of their scoring output from last year, they return 10 of the 12 players that made up last year’s 28-0 team. Logan Caldwell, Ethan Hooper, Taylor McClure, Kyle Lunsford, and Asher Brown are the biggest returning contributors from 2022. 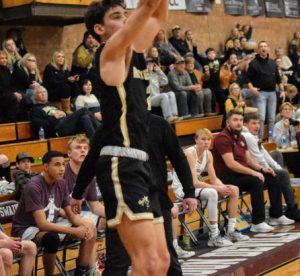 The Murphy boys basketball program is headed in the right direction. Zack Skogen, Dom Rummler, and Dillian Brown headline a roster that returns all but 1 contributor from last year’s team. The thing that will set this team apart from the recent Bulldog teams is their depth. Along with the three guys previously mentioned, Cole Laney, Ty Laney, Will Carringer, and Dozer Mashburn are guys that can give you valuable minutes. The biggest question mark around this team is, Has Zack Skogen taken the next step? If he has, then this could be a dangerous team come February, but I still think we’re a year away from seeing the Black and Gold at their best.

The Red and Black are returning everyone from last year’s 12 and 13 season, including freak athlete Isaac Weaver and young gun Kegan Ellis. This is going to be a much-improved team due to experience alone, but I look for them to drop a couple of games out of the gate due to their football team’s deep run in the NCHSAA State Playoffs (& I’m sure they’re just fine with that).

From looking at old rosters, it seems the Maroon Devils lost 10 players to graduation off of last years 18 win team. While they do return Senior Nathan Bogdanowicz, this is going to be a very young basketball team. They’ll have some good contributors moving up off of last years JV Championship winning team, but the inexperience is the reason for their fifth place ranking.

Men’s sports at Cherokee High School have taken a step back as a whole without Donald Bradley as a part of their programs. The football team struggled to find their identity this season and I think the same will be said about their basketball team. However, I do look for Tso Smith and youngster Jack Teesateskie to provide some highlight reel plays for the Braves. 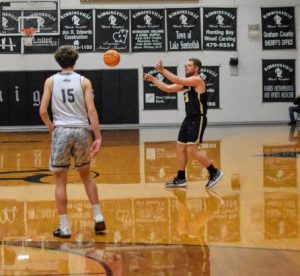 The Lady Knights should be in for another great season among the top of the SMC. They will have one fairly larger hole to fill down low with the absence of Yeika Jiminez, but if they’re able to plug and play that position then they may be in for a run-the-table type of season. Desta Trammell is undoubtedly the best player in the conference and with the way Zoie Shuler was coming into her own last season, the Knights should be able to run teams to death. Add in the spot up shooting of Kensley Phillips, and the Lady Knights offensive fire power should be the stuff dreams are made of.

The upcoming 2022-2023 season for the Black and Gold is one big question mark. As if the departure of Torin Rogers wasn’t going to be hard enough for Murphy, add in having to replace your award winning coach and things look pretty grim. But, with new-old coach Gary Thompson at the helm, it will be interesting to see how the Dogs respond to this new style of play. They have the talent to compete at a very high level, and I think they will respond well to this new challenge. While Addie Johnson and Lochlan Rogers should be staples on the court, we’ll also probably see a heavy mix of Lailee Holloway and Julia Dockery.

Amaya Hicks, Mya Burrows-kurr, and Maddie Spates will look to lead the Lady Devils on the court this year. While Mazie Helpman will be hard to replace, the Maroon Devils should have enough returning players to have a successful season. It’s also worth noting that they were peaking at the right time as last season ended with an upset over Draughn and a 2 point loss to Uwharrie Charter in the playoffs, so if they can ride that momentum this team could prove tough to beat. 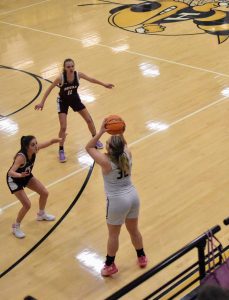 No Leilaya McMillan or Betty Lossiah could prove trouble for the Lady Braves this year. The whole offense ran through McMillan in 2022, so it will be interesting to see who the go-to girl is for the 2023 season.

While Hayesville lost their top scorer in Lila Payne to graduation last year, in 2022 the Jackets had some very young girls playing some valuable minutes on the court that should pay dividends in 2023. Lila Roberts should be the on-court captain for Hayesville in her senior season, but Brooke Graves and Madison Peck are also poised for breakout season if the Jackets can get rolling early.

While the Lady Cats may not finish at the top of the standings this season, this year should be a turning point for their program. A team that has won three games in three years, they have struggled to find their identity. But under new head coach Tim Wood, I think the times are a-changin’. This should be the most successful season for the Wildcats since 2018-2019 and Sophomore Kylie Donaldson will lead that charge. The lone senior on this team in Leah Preston will help compliment Donaldson with her outside shooting abilities, as well as Gracelyn Worley and Kinleigh Queen. I’m calling it now, these Lady Cats will win a game that they shouldn’t before the season is over.