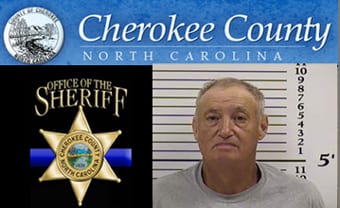 On or about July 12, 2015 the Cherokee County Sheriff’s Office responded to the convenience site located at the Cherokee County Landfill to investigate a suspicious incident. During the initial investigation a small female goat was discovered to have been placed in several plastic garbage bags which had been tied up. The garbage bags containing the female goat were then abandoned in one of the dumpsters. The responding Deputy removed the bags and the goat and contacted a local rescue organization to provide care for the goat.

During the investigation of the incident video footage from surveillance cameras provided a tag number of the vehicle that had been used to transport the goat to the convenience site. From that information an investigator was able to identify Patterson as the person that had abandoned the goat at the landfill.

Patterson upon learning of the existence of charges surrendered himself to the Cherokee County Detention Center. Patterson was placed under a $2,500.00 unsecure bond and is scheduled to be in Cherokee County District Court on July 29th, 2015.