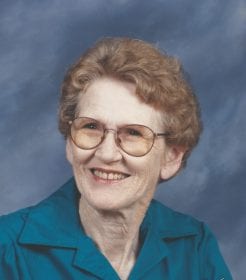 Grace Auberry Mease, 86, of Hayesville went home to be with the Lord on Tuesday, July 5, 2016 in a Clay County Care Center after an extended illness. She was a native and lifetime resident of Clay County. Grace retired from Carolina Dress Corporation. Grace was an accomplished seamstress, making everything from school clothes to wedding dresses for her girls and granddaughters. She also loved both vegetable and flower gardening. She loved to sing and will be fondly remembered at the Clay County Care Center for her singing, even when she could no longer remember the words to the song. Grace was a member of Shiloh Baptist Church.

She was the daughter of the late Homer and Zora Brendle Auberry and the wife of the late Ray Mease, who died April 4, 1983. She was also preceded in death by a great grandson, Ian Petkevich, who died in 2015; two sisters, Evelyn Hatchett and Thelma Martin; and five brothers, Frank, Olen, Roy, John, and Charles Auberry.

Funeral services will be held at 2:00 PM Friday, July 8, 2016 in the Chapel of Ivie Funeral Home, Hayesville with the Revs. Clark Moss and Jimmy Rogers officiating. The interment will be in the Hayesville First United Methodist Church Cemetery. Pallbearers will be Robert Mease, Darren Carter, Jay Rennie, Robbie Williams, Casey Henderson, and Terry Hatchett.

The family will receive friends from 12-1:45 Friday afternoon at the Ivie Funeral Home, Hayesville prior to the services.

Ivie Funeral Home, Hayesville in charge of all arrangements.