After a big semi-final win over Robbinsville last week, the Bulldogs of Murphy High School made the trek to Wallace Wade Stadium on the campus of Duke University for the 2018 1A State Championship game.  Their opponent, the Pamlico Hurricanes come as the higher seed making Murphy the visiting team.

The captains took the field for the coin toss with the Canes winning the flip and choosing to receive the ball first.  The officials spotted the ball and on the first play from scrimmage a well placed hit by Micah Nelson caused the Canes’ running back to cough it up and put it on the ground.  Nelson scooped up the football and went untouched for 34 yards and a Bulldog score to put the Bulldogs up to stay.  The Murphy offense was dominating all night without

their leading rusher in Slade McTaggart.  After a failed appeal, McTaggart was not eligible to dress out due to the previous week’s ejection.  Coach Gentry and his staff felt the disqualification of #32 was unwarranted after watching the video of the incident.  McTaggart was on the sideline cheering on his brothers on every play.  Commenting on having to sit out, Mctaggart said: “It hurts not being out there with my team.”  As real teams do, K.J. Allen and Devonte stepped up in McTaggart’s absence. 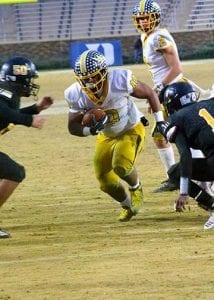 Allen carried the ball for 163 yards on 19 touches and 4 touchdowns with Murray adding 2 scores on 8 carries for 109 yards.  Ray Rathburn also reached paydirt with 1 touchdown in the State championship win.  Coach David Gentry stated that his running backs performed very well and a lot of credit goes to his offensive line.  The linemen blocked really good and opened holes to run through.   Getting into the end zone 9 times, the Bulldogs had the Hurricanes on their heels all night. 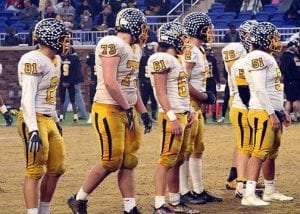 Pamlico rushed and passed the ball fairly well with 327 offensive yards and 27 points in the game.  The strong defense of the Bulldogs bent but never broke. The Canes turned the ball over 5 times(3 fumbles and 2 interceptions) in the loss to Murphy.  The first quarter had the Bulldogs put up a quick 21 points with Pamlico crossing the goal line once at 2:54 on the clock.  With an uneventful second quarter, these 2 teams entered the locker room at the half looking at a 21-7 Bulldog lead.

Coming out for the second half, Murphy received the ball and it didn’t take long for them to pick up where the first half ended.  Nelson led his offense down the field.  At 7:53 on the clock, #24 Ray Rathburn took the Nelson 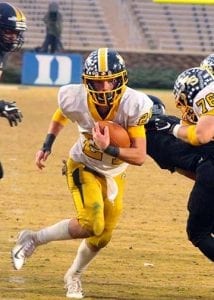 handoff for 11 yards and a Murphy touchdown bringing the score to 28-7.  They would not stop there.  K.J. Allen got his second of 4 touchdowns on the night with 2:41 left on the 3rd quarter game clock.  Pamlico squeezed in a late quarter score to close the gap to 35-14. The Bulldogs closed out the final 56 seconds of the 3rd moving the ball down the field and on the first play of the fourth and final quarter Devonte Murray powered his way through the line breaking tackles and scampered 46 yards for yet another Bulldog touchdown.  Allen and Murray dominated the offensive output for Murphy in the quarter.  Allen scored 2 more times with runs of 12 yards and 23 yards and Murray added 1 more at 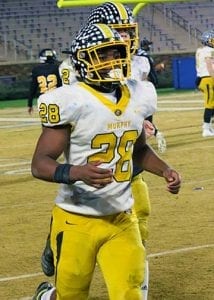 7:47 with a run of 31 yards for a game total of 60 points.  The Hurricanes added to late touchdowns but it wasn’t enough to even put the outcome in question.  The Bulldogs made a major statement to anyone that may have doubted they were good enough to be ranked.  The 60-27 win over the higher seeded Hurricanes left no questions as who the number 1 team is in North Carolina Conference 1A football.  This State Championship makes 9 for the Bulldogs and will be a contender next year as well.  Congratulations to Coach David Gentry(See video below), the Murphy Bulldogs, and the entire town of Murphy North Carolina on bringing the championship home. 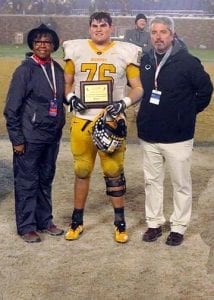 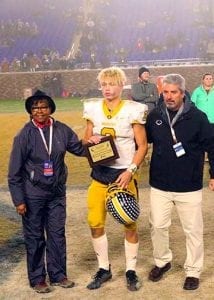 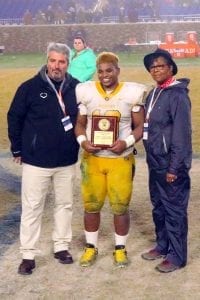