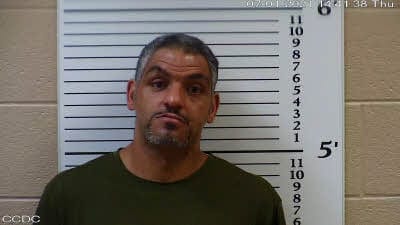 Murphy, NC— Sheriff Derrick Palmer announced the July 01, 2021 arrest of Anthony Wayne Dendy, a 44-year-old male who listed a Murphy, North Carolina address, for violations of the Sex Offender Registry.
In March 2021, Dendy reported in person to the Cherokee County Sheriff’s Office to register as a convicted sex offender. During the registration process, it was found that Dendy had been convicted for Assault with Intent to Commit Criminal Sexual Conduct First Degree and Criminal Sexual Conduct with a Minor Second Degree in Anderson County South Carolina in 1998. Due to the nature of the violations, Dendy was classified as an Aggravated Sex Offender.
During the registration process of sex offenders, they are required to report any Online Identifiers, i.e. social media accounts, email addresses, etc., to the registering Sheriff. At the time of registration, Dendy completed an affidavit indicating that he had no Online Identifiers.
In June 2021, Dendy reported in person to the Cherokee County Sheriff’s Office during the verification process Dendy again completed an affidavit indicating that he had no online identifiers.
Shortly after Dendy had reported he did not maintain any On-Line identifiers information was made known to the Cherokee County Sheriff’s Office that Dendy had at least one or two accounts on the social media site Facebook.com. After confirming the existence of the accounts warrants were obtained and Dendy was arrested at his registered residence.
Dendy is currently incarcerated in the Cherokee County Detention Center under a $20,000.00 secure bond and has a July 15, 2021, Cherokee County District Court date.
Sheriff Derrick Palmer stated “We continually receive reports of our youth being exploited by individuals and continue to encourage our community to be an extra set of eyes and ears in our fight. We thank our concerned citizens for their support and encourage continued reporting of this and all crimes.”
To report suspicious activity and suspect violations of the law please call 828-837-1344 or submit a tip at [email protected]
online identifiers Press Release Sex Offender