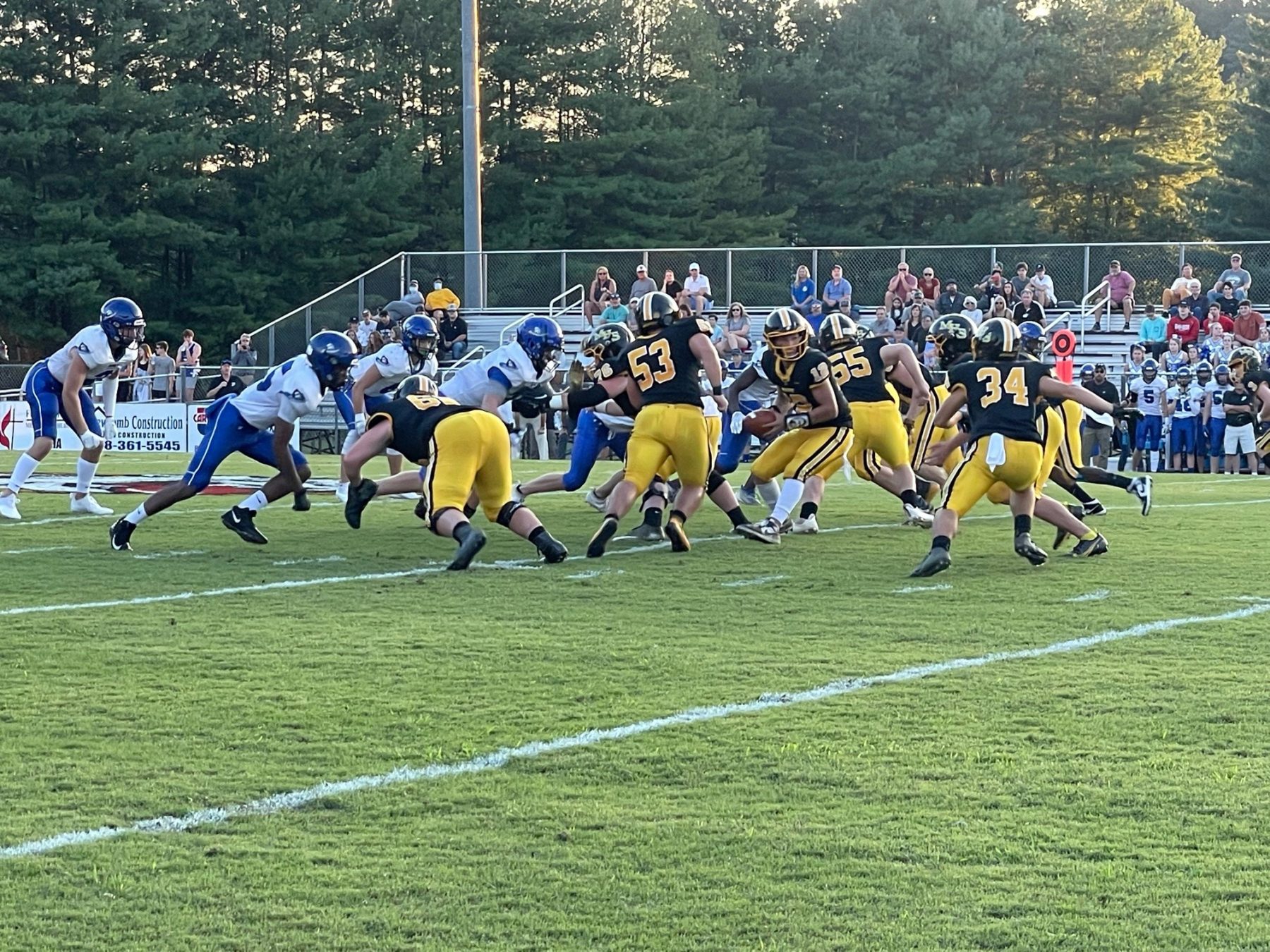 (Murphy) – – “I like this week’s team energy and tempo, but we have got introduce them (Rabun County Wildcats) to Murphy football,” Murphy Head Football Coach Joseph Watson explained to the team after practice.  That may be a very simplified game plan, but inside that formula may be the complete key, answer, or secret to winning Friday night’s football game.  Rabun County’ s first game was a loss to 5-A state champion Jefferson High 22-to-13 and the second game was a 47-14 win over Pace Academy.  Our bet is the first game might have been physical and the second, which aired on ESPN2 didn’t show a lot of physical play. Besides not making errors and triggering penalties, Murphy must throw some ‘bust you in the face’ – smashmouth football to set the tone for the game and get a hurry on high-powered Wildcat quarterback Gunner Stockton.

Tremendous opportunity is presenting itself to Murphy when it faces Rabun County Friday night (September 10, 2021) after a week that felt like a desperate search to find a game when South Pittsburgh (Tennessee) canceled its game with the Bulldogs.  Coach Watson says getting this game balances out the canceled game.  “I spoke to their (Rabun County) coach a little bit about it and I thought we have an opportunity like that to play a school of that caliber, we needed to take and be excited about playing them.  I know Rabun County has a really good program, so it does balance it out,” Watson stated after practice this week.

Learning the next opponent would be Rabun County excited the Bulldogs.  Usually, a long weekend accented by Labor Day might be a tough week to get the team motivated.  Murphy Senior Quarterback says each practice this week has been solid.  “We knew Saturday morning we got the message that we were going to be playing Rabun County and just from then on we have been super excited.  Every practice has been 100 percent all the way through.  Probably been some of our best practices I have ever had out here at Murphy just because of how excited and how much energy we have had,” Kellen explained.  Rumfelt continued to say teams experiencing the physical nature of Bulldogs don’t have as much success.

Most of the physical aggression will need to come from the men on the line.  That places great responsibility on players like Rylan Smith and Jonathan Hamby as frontline leaders.  A major key to success against Rabun County will come from the linemen invading the Wildcat backfield and hurrying a five-star quarterback who has all the tools to post a win.  Wildcat quarterback Gunner Stockton will play almost 100 percent of the time in shotgun, five to six yards off the ball and simulate even more speed and agility.  “I think if we just hit them in the mouth early and get to the quarterback quick so he doesn’t have time to throw it, I think we will be pretty good. But we have to get to quarterback in time,” Junior Center Jonathan Hamby states.  Hamby will be a coach on the field.  His responsibility will also include reading the 3-3 stack defense that will threaten Murphy and audible to the team to possibly adjust.

Playing man or zone defense will be a critical decision for Murphy’s leadership.  Or it may rely on possibly playing a hybrid of both.  Senior Running Back Juan Allen is noted for carrying the football, will be challenged to play specific assignment defense from the Bulldog secondary and keep pace with Stockton’s favored receivers like Junior Jaden Gibson, who helps build the passing yards and touchdowns posted by the Wildcats.  “I think they only thing that will change (defensively) is we are going to run a little bit of man because it gives our defensive line more opportunity to push in on the quarterback,” Juan states.  Will he be tested?  “I think I am going to be tested a lot, but I am looking forward to it,” Allen added.

What about Rabun County?

The Wildcats present an experienced team with a lot of seniors at starting positions.  The Wildcat offense loves to spread out its team with four or five wide receivers and leave several decisions in the hands of its quarterback.  This team will stretch out its opponents and hit a vertical play.  Gunner Stockton is well developed and highly skilled young man.  Stockton has earned a national ranking of 5 or 6, depending on the report, and has committed to play for the University of Georgia, which is known for having skilled quarterbacks, like Matt Stafford.  Stockton is 6 foot 2 inches and over 220 pounds.  When he is not throwing, he can run like a fullback on quarterback counters and traps.  Don’t be fooled, if there is not passing opportunity, Stockton will make a play.

Defensive looks from the Wildcats will mirror the same configuration of a 3-3 set, like what we saw last week against Georgia Force.  It is also a defensive set that teams like Swain County have been sending toward the Murphy offense.  The Bulldog offense should be trained to face the Wildcat D.  The frontline averages 240 pounds and is lead in tackles and stunts by Junior End Cersar Cruz.  The defense will adjust depending on the alignment it sees from cover three to cover four or frontline five technique to possibly a seven.  During the Pace Academy game, the Wildcat defense was not tremendously aggressive, but limited scoring to only two touchdowns.

Don’t throw hope of not being able to handle Rabun County away.  They can be beaten, just as they suffered a loss a few weeks ago to Jefferson.  The teams Rabun County will face are no pushovers.  “Well, they can be beat.  But you know the caliber of teams they play in the state of Georgia are outstanding. They (Rabun County) are used to good talent and people getting after them, so it is not going to be anything different for them,” Coach Watson notes.

What this means is Murphy must play flawless, serious, and physical football.  This makes the original point of having a great opportunity to play and join the ranks of the high-quality football teams that make impact as Murphy moves through the fall season.  The Bulldogs will have to step up its speed and play diligently through all four quarters of football.  “We are going to have to play mistake free and continue to be getting better, which is what we did last week,” Coach Watson says.  Be mentally and physically tough, that’s in original formula and work toward a second win for the season.

What a name to have, Gunner Stockton, who is the star quarterback with a promising future at the University of Georgia. One may never know how he was named, but it is fitting.  Stockton is not an anomaly at Rabun County High.  The town of Tiger has produced some other great football players like Charlie Woerner, who played for the Wildcats.  Woerner also suited up for the Georgia Bulldogs mainly as a blocking tight end and was drafted in the sixth round in 2020 for the San Francisco 49ers.  Woerner is also the nephew of Scott Woerner who played for Georgia and professionally for New Orleans and Atlanta.  Never overlook the stock of players that come from little towns.  Just ask Carl Pickens, Heath Shuler, and most recently Yousef Mugharbil.