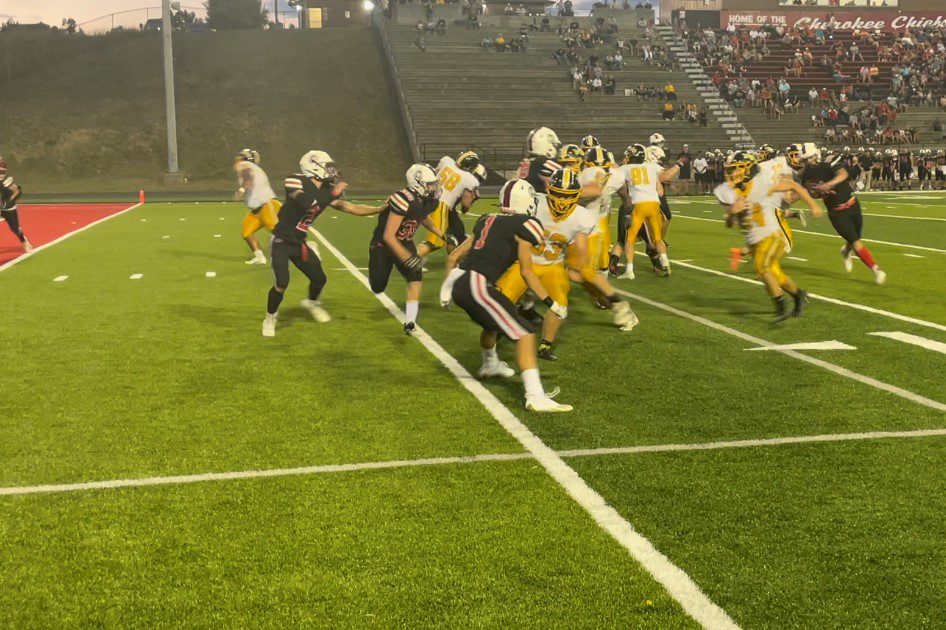 Bulldogs reunite on the field with Coach Thomas Nelson

(Blairsville, Ga) – – Murphy Bulldogs have been eyeing this week’s football game for a few months or since Thomas Nelson announced he would take a job with Union County High, a well-deserved opportunity.  Irony was thick this past Sunday when Murphy held its Championship Ring Ceremony at Shepherd of the Mountain’s Church.  During the ceremony a central presentation honoring legendary Head Football Coach David Gentry was made by Coach Nelson.  Who would have thought Coach Nelson would return for the ceremony to praise a team that he will lead the Union County High Panther Defense against.  “Well, I will end my presentation by saying Go Bulldogs, just not this coming Friday,” Coach Nelson jested at the ceremony.

The drama of meeting up with Coach Thomas Nelson at Union County High presents a real challenge.  However, the challenges may be balanced.  From the film you can access on Max Preps or YouTube, the 4-3 defensive stack and technique is similar to Coach Nelson used at Murphy.  Turning the tables, Coach Nelson is keenly aware of the Murphy Offense.  This probably means Friday’s game will weigh heavily on the passion, tempo, good execution, and physical contact the players show on the field.  “That’s pretty accurate.  He (Thomas Nelson) knows a lot about us, we know a lot about him. It is going to come down to execution offensively and do what we are suppose to do,” Murphy Head Football Coach Joseph Watson commented.

Don’t let the drama of getting to have Coach Nelson as an opponent overshadow the skills and ability of the Union County Panthers.  This is a game Murphy has been waiting to play for approximately 10 years.  This game has great importance to Murphy because it can either lead the Bulldogs into conference play next week with Cherokee High (Cherokee Indian Reservation) on an up note or on a flat feeling.  “We try to be undefeated going into the conference (portion of the season).  Our grade is probably a C.  You never want to end up .500 going into the conference season.  The players are getting better, and they are playing hard.  We are proud about their effort,” Coach Watson added.

How will Union County Panthers look?

The offense and defense from Union County are formations and plays we have witnessed for many games.  The Panthers Offense likes to spread the opponent out and launch a screen pass or run a dive up the middle.  Quarterback Logan Helcher likes to do a three-step quick effort to launch several bubble screens to receivers Griff Young and Keyton Chitwood.  According to published stats, Helcher is hitting more than 55% of his passes.  If the pass isn’t there, he can rush or send Halfback Cayleb Rogers.  This all sounds too familiar.  This offense will challenge the Murphy linebackers.  Ty Laney plays linebacker for the Murphy Bulldogs and explained what he expects from the Panthers.  “They are a passing team.  They have good athletes.  We are going to have to do our jobs and there can be no mistakes in this game.  They have a good quarterback, and we have to get to him,” Laney says.

Play for the Murphy Bulldogs is developing well in the trenches, which will be real important Friday.  Junior Lineman Mason Thrasher says, “We are getting more in sync with each other.  We are starting to hit harder I believe.  We are going to have to get on our man and stay fit with the linebackers.  Like any other game (as in Union County), let’s play hard; let’s play fast; and go hit them.”

Friday after the game with Cherokee High, Murphy Senior Quarterback Kellen Rumfelt said the team wasn’t ready for Union County.  After practice late this week, he believes the team is ready to take on the Panthers.  “I think we are definitely ready.  Obviously, we didn’t practice any for Union last week, but this week we have really been working hard and learning as much as we can about their team, and we know they are going to come out and give us a fight.  I know for sure we are ready,” Rumfelt explained.

The Union County Panthers are 0-and-3 on the season.  The losses were to Pickens 45-to-Seven last week; 41-to-28 against Chestatee; and 34-to-Seven against Fannin County.

See you on TV

The Murphy at Union County Game will be streamed this week on FYNTV.  The game will kick off in Blairsville at 7:30. Team FYN Sports Jake West and Brandon Stephens will bring the game to you.  Coverage begins at 7PM.  You can find the link at our Facebook page to see our live streaming coverage.