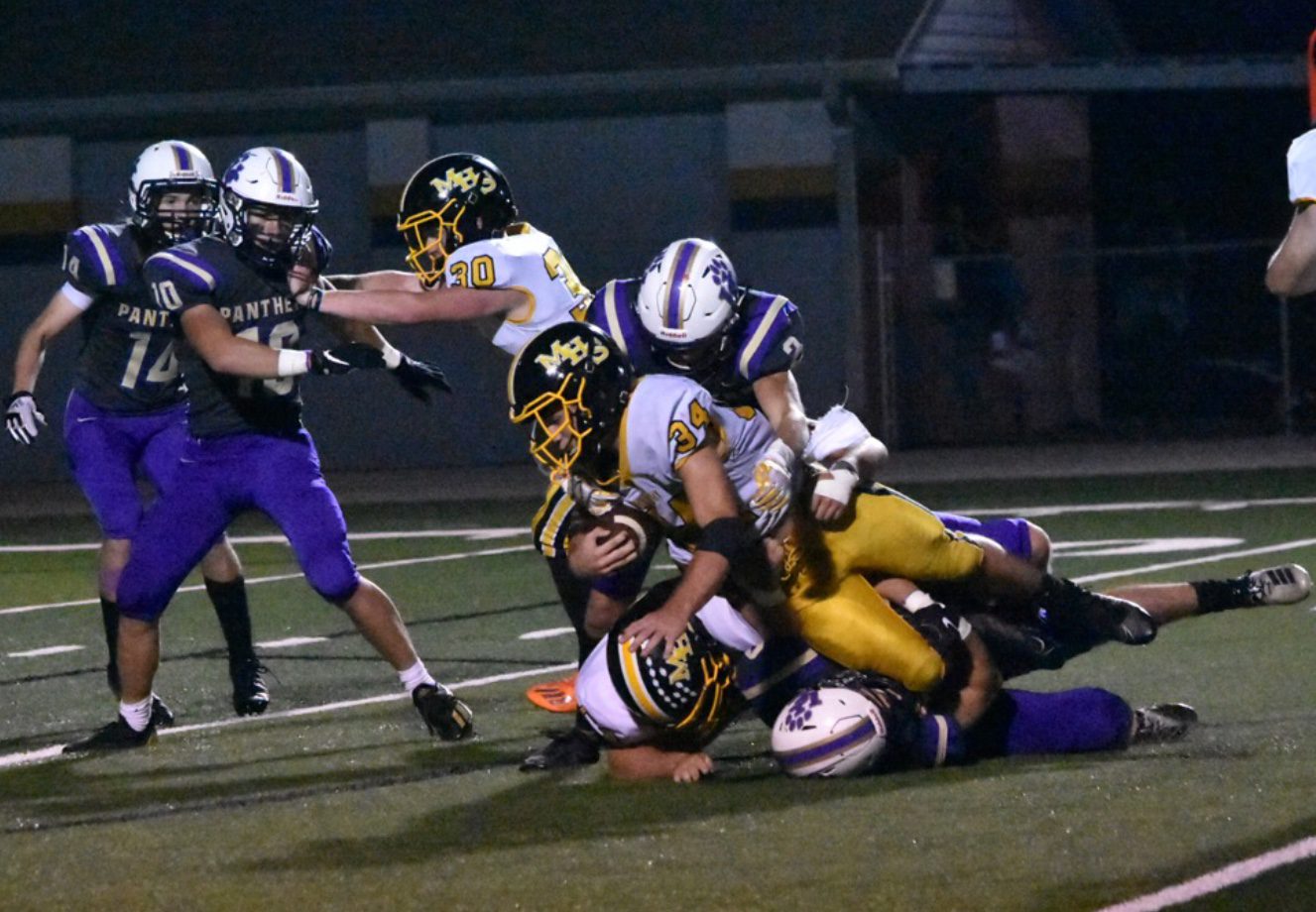 (Blairsville, GA) – – Pick six by Murphy defender Cole Laney is key play to set the momentum and energy the Bulldogs needed to defeat the Union County (GA) Panthers 54-24.  Murphy needed this play earlier in the game as the Bulldogs struggled with gaining the foothold needed to control the game through the first half, which ended in favor of Panthers 17-14.  The Bulldogs would go on to score three more times on strong offensive play from Juan Allen, Ty Laney, and Chandler Wood.  The Bulldog defense stifled any efforts by the Panthers to go to the end zone by hurrying and pressuring Union County Quarterback Logan Helcher.  The win Friday night lifts Murphy to 3-and-2 on the season and gives the Bulldogs a 5-and-oh lead in the series with Union County.  Union County sinks to 0-and-4 on the season.

How can a pick-six football run seem like playing basketball?  If the corollary can be made, Cole Laney made it.  “I did just weaving in and out and just jumped into the end zone.  I was not going to get stopped at the one-yard line after all that.  It was a good momentum swing for us.  Our line struggled to get a sack.  At the end we go him (Helcher) hurried and he threw an interception,” Laney stated.

Murphy coaches, players, and fans exploded when Cole Laney scored on an interception.  You could see the thrill in Murphy Head Coach Joseph Watson’s face.  “This was exciting, and it was fun for those kids.  Everybody loves Cole and wanted to see him get the pick and run it back for a touchdown.  Cole has had two really good weeks playing defense.  He always works hard and plays hard,” Watson said after the game.

Murphy worked diligently to find its cadence and tempo to be effective offensively through the first half.  The Bulldogs burned almost seven minutes during an early possession get down to the 1-yard line, where Quarterback Kellen Rumfelt pushed his way to touchdown town for the first score, and the point-after kick was blocked.  With less than a minute to go Murphy used up about five minutes to set up a keeper once again for Rumfelt to score the second touchdown and run Ty Laney in for a two-point conversion.  Union County High Kicker Kyler Robbins lifted a 39-yard field goal to give the Panthers the lead at the half.

Bulldog offense felt the sting of a good Panther defense according to Kellen Rumfelt. “It was tough settling in.  We really didn’t have momentum in the first half,” Rumfelt explained.  He gave credit to Coach Thomas Nelson guiding the Union County defense.  “It was a clow start.  They (Union County) were very well coached.  Coach Nelson did a good job on defense.  At the end of the day, we had more athletes and we won,” Rumfelt added.

Murphy penalties helped push the Panthers up the field.  Fourteen penalties for 140 yards against the Bulldogs gave the Panthers good opportunity to move the ball from short field position or cut the distance to the goal line.  Penalties ranged from sideline warnings, pass interference, and personal fouls.  Murphy was flagged a number of times for breaking up passes and roughness.

Adjust and Attack to take the lead

You could tell the Murphy Bulldogs had a good fireside chat at halftime and made good adjustments in the second half.  Mason Thrasher, Rylan Smith, Kyle Willard, Chandler Wood, and the remaining Bulldog defenders set their sites on blitzing and stunting to place a great amount of pressure on Union County Quarterback Logan Helcher.  Too many times Helcher found himself surrounded by Murphy defenders trying to find his spot to launch a bubble screen pass.  With good defensive efforts by Murphy, Helcher was able to complete 19 of 33 passes, which was half of its game plays (66 total plays), to rack up 172 yards, a majority of the Panthers total offense. 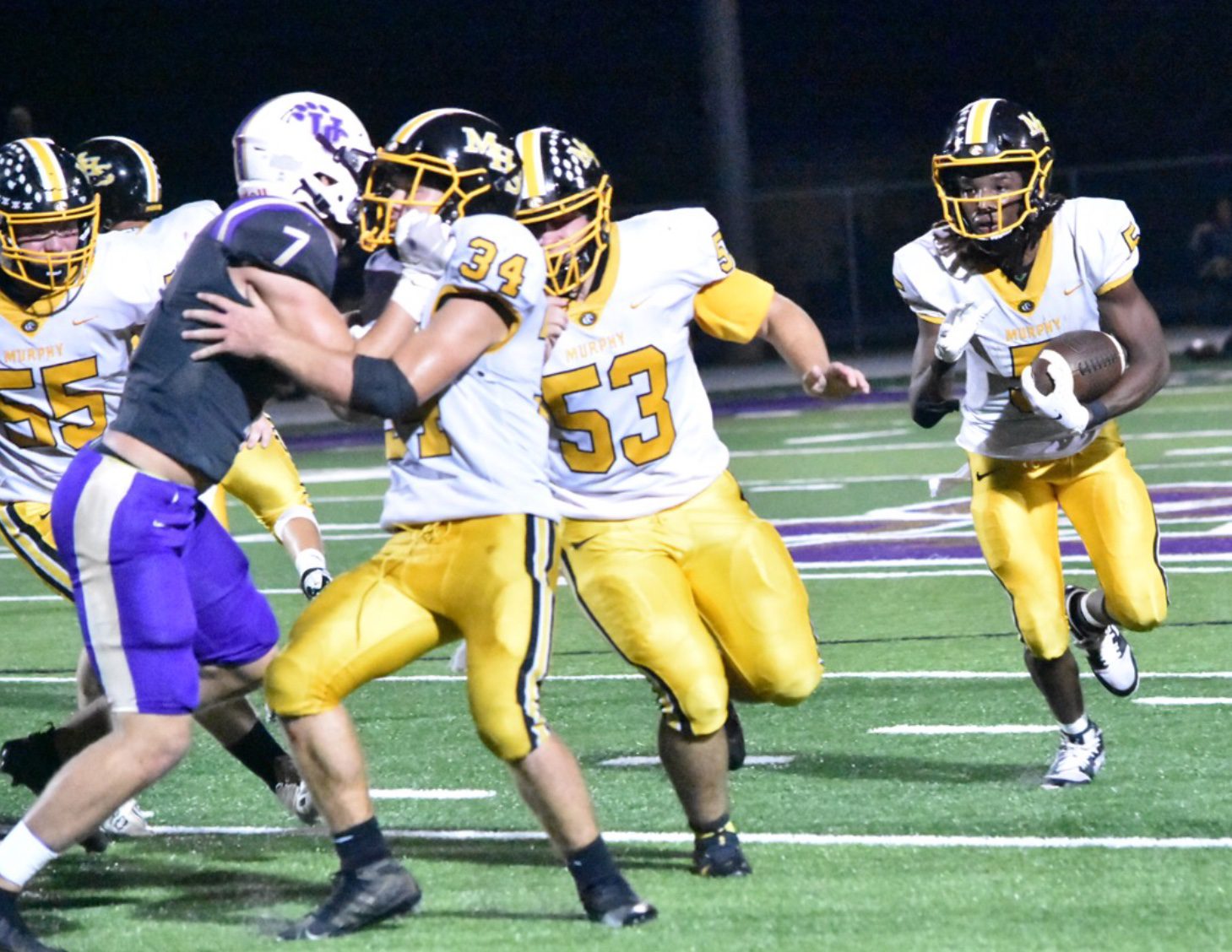 Turn the tables and Murphy’s offense was on fire.  Juan Allen, who averaged about 13 yards per carry, lit up the scoreboard with three touchdowns and ended the night with 143 yards rushing.  Besides Cole Laney’s pick-six, Chandler Wood posted a three-yard touchdown.  Ty Laney capped off Murphy’s scoring with a fumble recovery at the Bulldogs 26 yard-line to carry a final touchdown.  Ground game was the play of choice since the Bulldogs needed to burn up the clock and get the win as well as the momentum had shifted in their favor where so many players made good plays.  Three turnovers in the second half killed efforts by the Panthers.  A turnover on downs and a fumble recovery for touchdown were too costly for Union County. 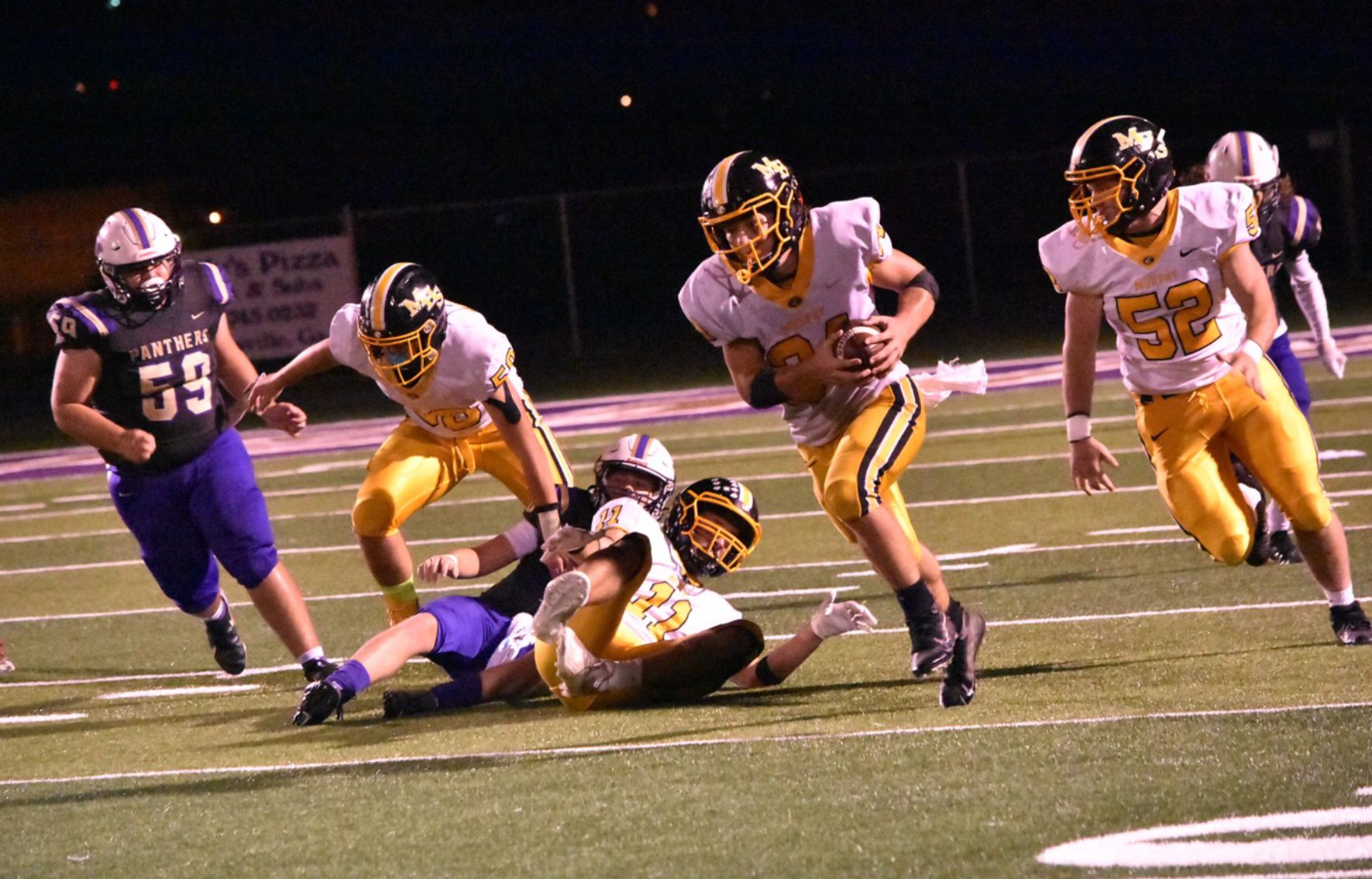 Finishing the drill and good effort in practice this week paid off for the Bulldogs.  Union County’s skill and passion plus lots of penalties were not necessarily in the minds of the Murphy squad.  “They came out ready to play.  We knew they would be ready to play and play hard.  They kept the ball from us in the first half a lot.  We kept getting penalties.  It was hard for to get something going.  Once we did, we were rolling,” Coach Watson explained.  It was defensive efforts that help lift the Bulldogs.  “Once we started getting pressure on him (Helcher), they (Panthers) started changing.  The kid (Helcher) can play.  That kid is good,” Watson added.

Coach Thomas Nelson as a Panther Coach to the Bulldogs

How tough is it to challenge and win against one of the leaders you knew as a Bulldog?  It brings a lump to your throat but for most of the young men on the Murphy football team, they have known Coach Thomas Nelson as a leader and support.  I don’t think that has changed as they complimented his defensive schemes dampened the Murphy first half drives.  It did not change the awkward atmosphere or erase the love and affection one has for Coach Nelson who gave so much to the Bulldog program.  “We are going to enjoy this one.  It’s tough to see Coach Nelson.  It’s a weird situation seeing him before a game.  We have been friends for 30 years and seeing him every day.  He did an outstanding job against our offense.  And they (Union County) are going to be better.  They are going to do better.  Proud of our kids and they love Coach Nelson,” Coach Watson said after the game.  Maybe not at Friday night’s game (September 24, 2021), but in every game Union County plays this fall, a little piece of the Murphy Bulldog Family’s heart will be a purple panther.

This coming week . . . Cherokee Braves and the Conference Starts

Winning against Union County is BIG for the Murphy Bulldogs.  The team needs as much energy, spirit, and momentum to begin the Smoky Mountain Conference season as it can muster.  This coming week (October 1, 2021) Murphy will travel to Cherokee to challenge the Braves.  Cherokee is 2-and-2 this season as is coming off a 35-to-26 loss to East Gaston and an open date on Friday (September 24).  Earlier in the season, the Braves lost to Smoky Mountain 41-to-13; defeated the Avery County Vikings; and shut out North Georgia 41-to-nothing.  Braves Quarterback Donald Bradley will return and is a very talented RPO style leader.  If the options and pass aren’t there, Bradley will run and make the play like he did in Murphy last year.  “Your non-conference games lead you into Smoky Mountain Conference play.  You know you have some good kids you’re going to play.  Donald Bradley is one of those kids like Helcher we played tonight, and he can go,” Coach Watson says.  The game plays in Cherokee at Ray Kinsland Stadium at 7:30. Team FYN Sports will bring you coverage of that game, so stay connected to FYN.

Payton McCracken had 3 receptions for 36 yards

Briggs Cornwell had 1 reception for 15 yards

Hunter Stalcup had 1 reception for 11 yards

Cole Laney had 1 reception for 6 yards