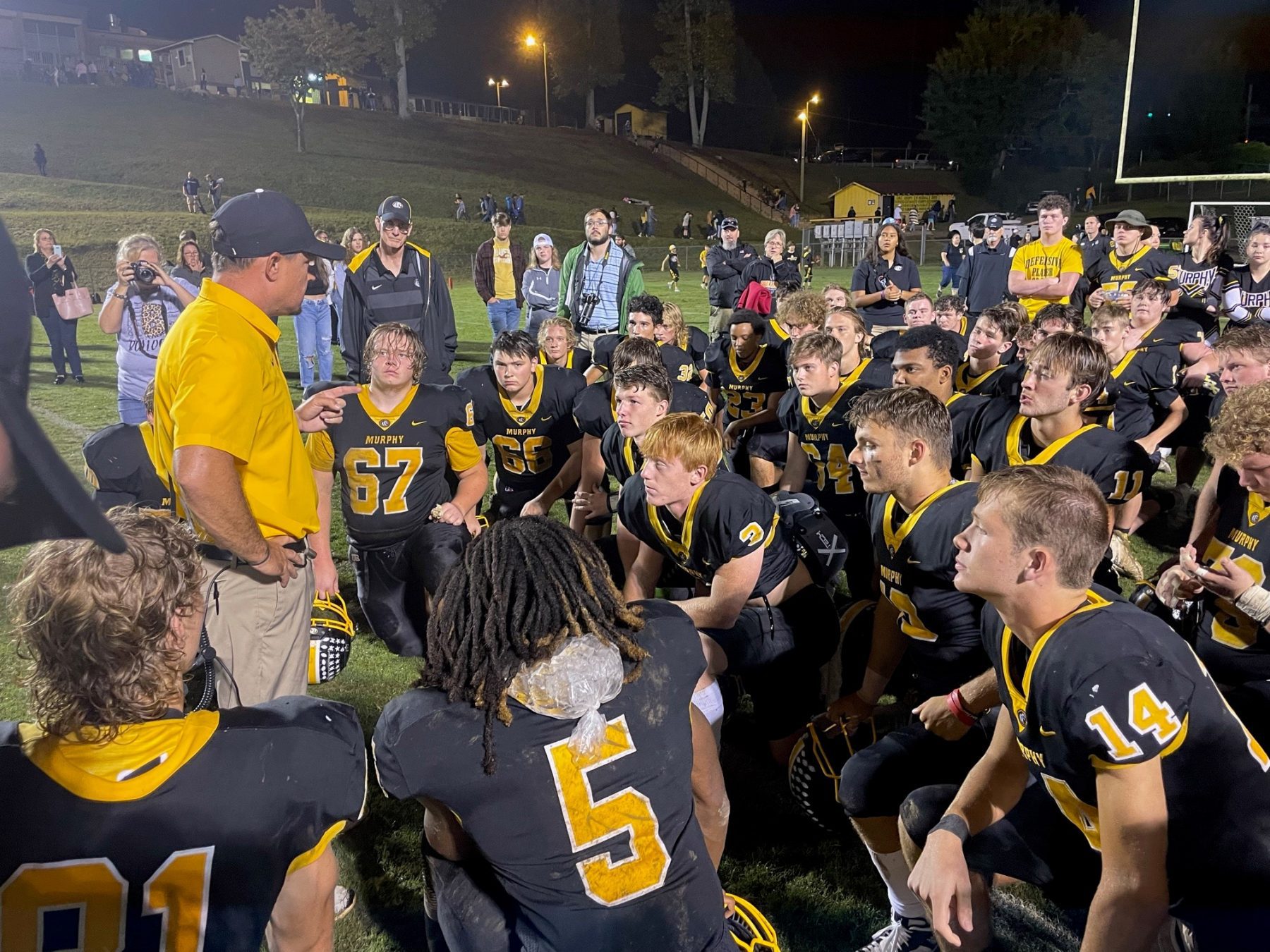 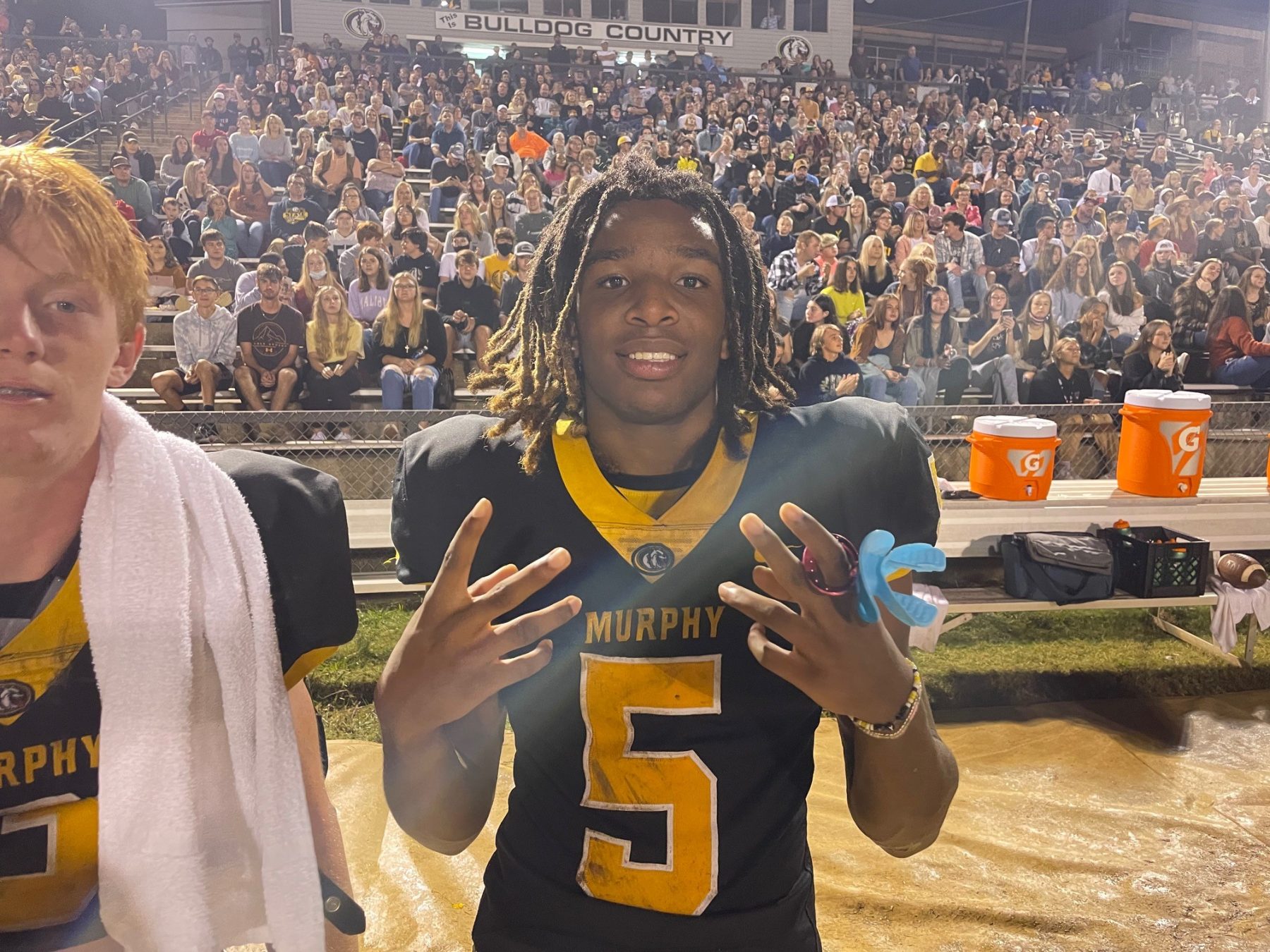 (Murphy) – – Energy was low and the nerves were a bit shaky for the beginning of the Murphy versus Hayesville homecoming night. Bulldogs and Yellow Jackets saw too many penalty markers for holding and personal foul calls to start the first quarter. Murphy found its rhythm and energy, mostly powered by Juan Allen who was on fire to climb to a 56-to-14 win over the Hayesville Yellow Jackets and its second conference win. Murphy is now 5-and-2 and 2-and-Oh in Smoky Mountain Conference. Hayesville falls to 2-and-5 and Oh-and-2 in conference play. Murphy’s Ty Laney caught a pass for touchdown and Tight End Will Johnson recovered the ball for a score to start the Bulldog offense.

Murphy set fire to the Yellow Jacket’s nest in the Second Quarter and the torch was carried by Juan Allen, three times. Carrying over the possession from the first quarter the Bulldogs marched the ball to the 25 where Allen carried for his first of three touchdowns for the quarter. About a minute later Ty Laney recovered a fumble and set the scene for Juan’s second touchdown, which was on a 42-yard pass from Quarterback Kellen Rumfelt. To end the half, Juan Allen carried the ball for about 6 yards to touchdown town. Will Joyner hit the point-after kick to make the halftime score Murphy 35 Hayesville Seven. Juan Allen commented on his play saying, “It felt good. I found my zone and stayed in it. The entire game. The line did great. I thanked (Jonathan) Hamby and all my linemen multiple times.”

Murphy performed well in the game meeting the challenges of Hayesville and heavy rain this week that made the field soft and slippery. “I was proud of the kids (Murphy) coming out playing tonight.  They were ready to play even on a sloppy field we were able to move the ball,” Murphy Head Coach Joseph Watson stated after the game. He credited Juan Allen with being the fire that ignited the team. “Juan got it going. Juan was ready to play and got after it. But the offensive line did a pretty good job blocking for him and he took advantage of that,” Watson added.

Murphy’s sophomore Running Back Hunter Stalcup got the hand off of the torch for the second half to keep the Bulldogs scoring tempo going. Stalcup dazzled on-lookers with a 46-yard touchdown run to begin the Third Quarter. To end the quarter, he ran 74 yards for another touchdown. Ty Laney set himself up to run a two-yard carry for a touchdown in between Hunter Stalcup’s scoring. The Fourth Quarter ushered in second string and substitutes for Murphy. The Bulldogs gave up a two-yard run for Hayesville Quarterback Logan Caldwell to end all scoring. Caldwell also had Hayesville’s First Quarter touchdown.

Some Take-Aways to the Game

Big men for Murphy made the difference for the game. The return of Rylan Smith is a big reason for good defense and offense. Smith along with Kyle Willard, Jonathan Hamby, Tryntden Moss, and even a pancake from Ricky Queen kept the Murphy offense protected and applied pressure to Hayesville from its defense. Defense has to have a good pat on the back as it denied Hayesville rush and passing opportunities to score. “Yeah, a little bit of pressure defense was very good. I was proud of them (defense taking care of business) and getting off the field in situations holding them deep in the red zone a couple of times,” Watson complimented the Murphy Defense. Hayesville also missed the presence of Jake McTaggart, who has been key for moving the ball.

“Lord have mercy” has to cross your mind when you see Murphy racked up 558 yards of offense, 441 of those yards came from rushing, in only 41 plays using 14:36 of time. That’s highly efficient. While the 117 passing yards may seem pedestrian, Murphy Quarterback Kellen Rumfelt was hitting his mark. Rumfelt complete 6 of 8 passes, most of which were deadly with two resulting in touchdowns. “It was a really good game. I think we worked together really well, especially it being really wet out here. I that sometimes discourages us before the game. But we couldn’t do anything about the weather. I know we were lucky enough to come out here and play,” Murphy Quarterback Kellen Rumfelt stated after the game.

Hunter Stalcup carried the ball seven times for 178 yards, which is a 25-yard average. Hayesville’s Logan Caldwell also made his mark in the game with 11 of 22 passes complete for 175 yards.

How many times did J.R. Carroll (Murphy Public Address Announcer) shout “FIRST AND TEN BULLDOGS?”  27 times Murphy made first down. When you consider the Bulldogs had 41 offensive plays and more than half of those plays brought about a first down, the Bulldogs were getting past Hayesville averaging 13.6 yards per play.

Juan Allen had 1 reception for 42 yards

Payton McCracken had 2 receptions for 29 yards

Hunter Stalcup had 1 reception for 10 yards

Will Joyner carried the ball 1 time for 6 yards

Murphy players and fans maintained focus on the Hayesville game, but kept an ear pointed to the press box when announcements of the score between Cherokee and Robbinsville came across the speakers. The 20-7 Cherokee win over Robbinsville sent waves of emotion around Bob Hendrix stadium with both fans. The reality is Murphy leadership knows this coming week’s game is not going to be easy. “We knew Cherokee was a good team. It’s (the Robbinsville game) going to be a big game for us next week too. This conference (Smoky Mountain) is an outstanding conference top to bottom. Everybody can play and everybody has got players. Any win you get in this conference is a bonus,” Watson commented about the coming week. Stay connected with Team FYN Sports to get the latest on this coming week’s game as Murphy will host Robbinsville on Friday, October 15th at 7:30 PM. 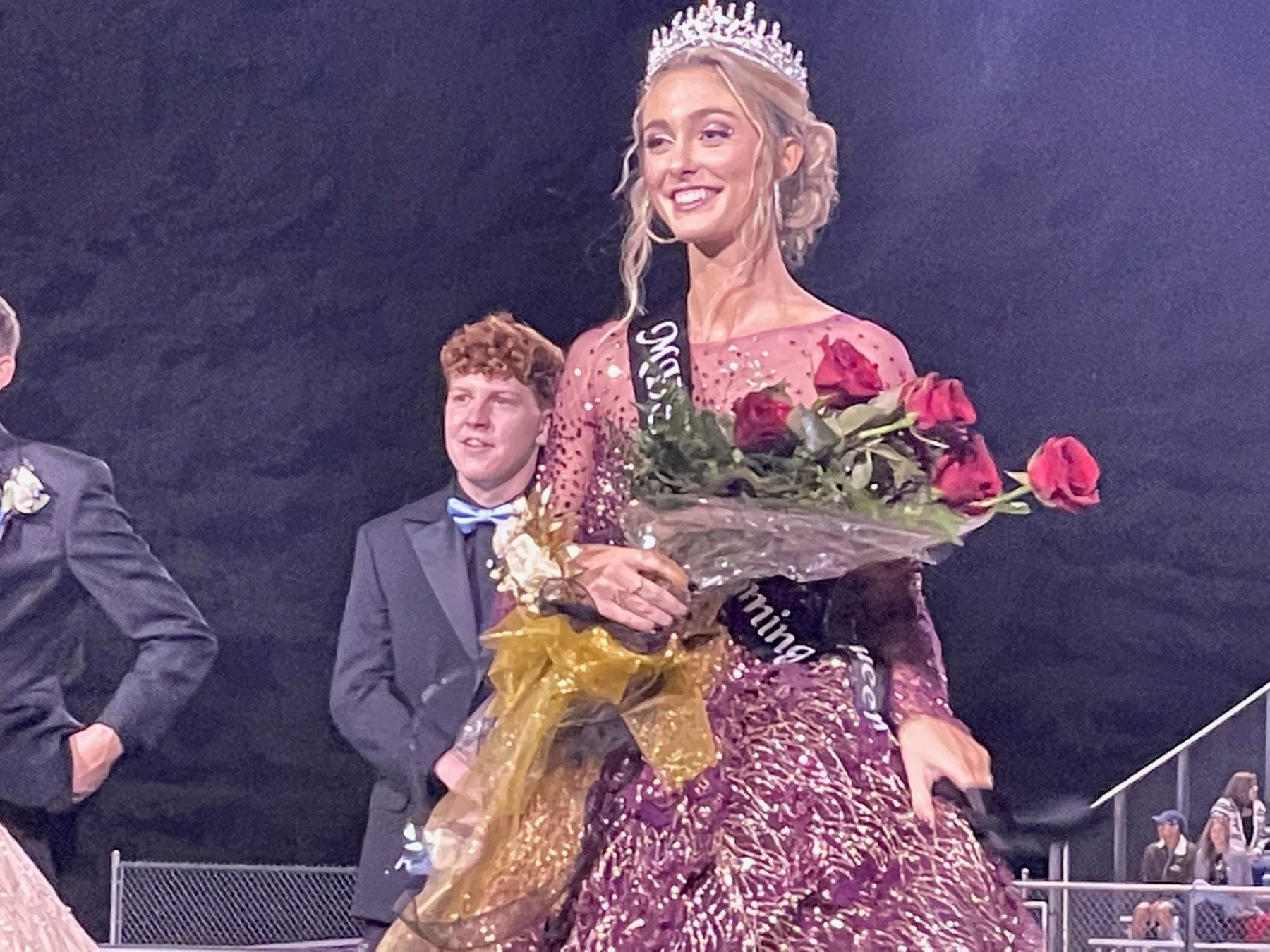