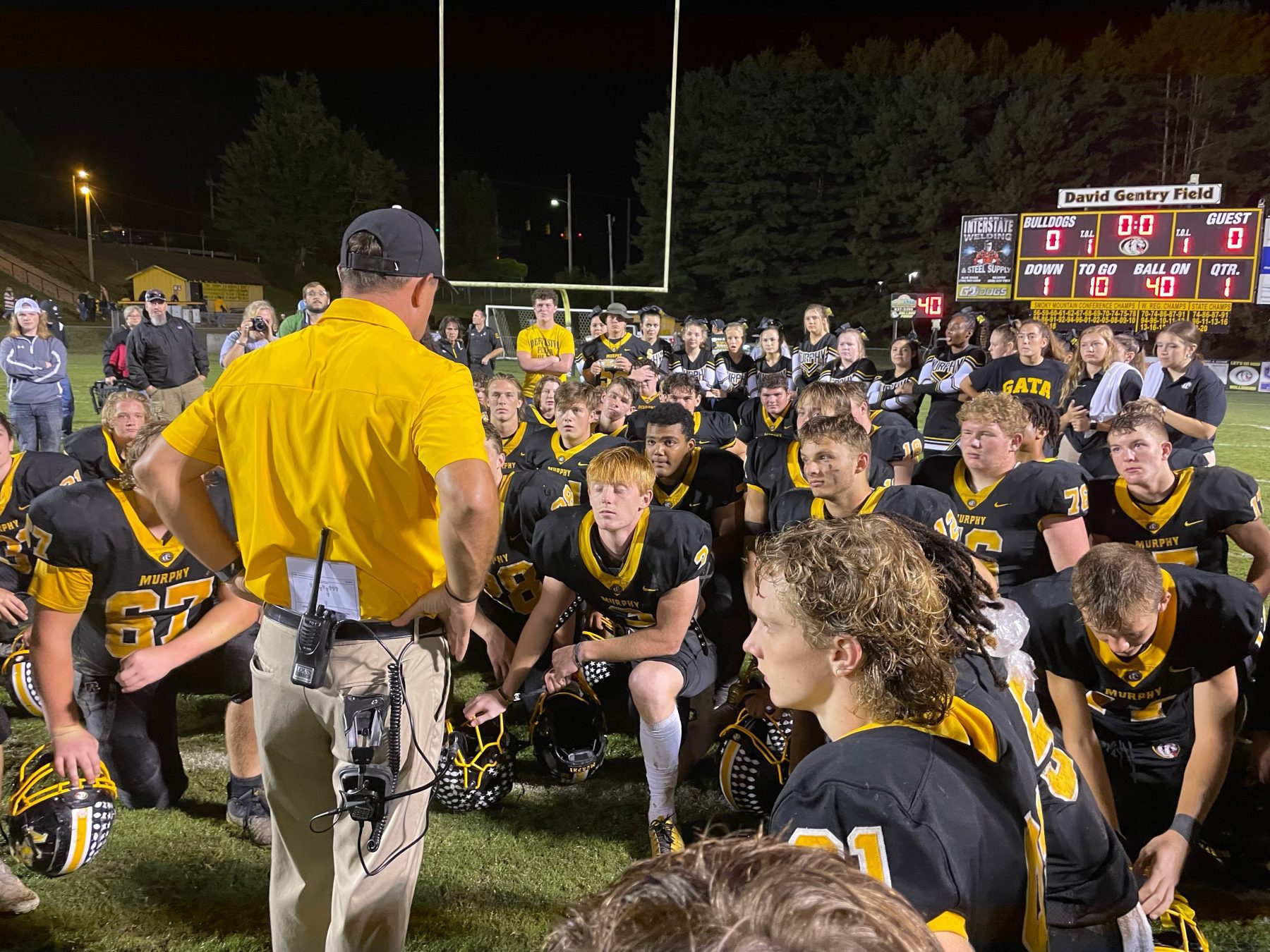 (Murphy) – – Nothing could be finer than having more points than your opponent in the game between Murphy and Robbinsville. The atmosphere would be so sweet like winning a conference crown, state championship, even a Super Bowl. The Bulldogs would continue to climb in the conference standings and work to shed a cloak of uncertainty about this Fall’s team being a good team. Robbinsville could earn its first conference win; break a losing streak; and gain some momentum to be more competitive. This game is going to have a lot more to offer the winner than community pride.

Preparations for the Murphy Bulldogs have been excellent. Murphy Head Coach Joseph Watson says, “It’s been nice to get back outside this week. Last week we were inside a couple of days. It was nice to have some good weather and have some up tempo and spirited practices. We are looking forward to the game Friday.”

The Black Knight Offense has an I or Power-I formation look lead by Senior Quarterback Dasan Gross, who is surrounded by Sophomore Running Backs Kage Williams and Cuttler Adams. Published stats and previous game film indicates Adams is a very talented running back that has generated 852 yards of rushing on 112 carries, which averages almost 8 yards per rushing play. Fullback Cage Williams has carried the ball 63 times for 236 yards and averages 3.6 yards per carry.

The larger question is will Cuttler Adams play? Adams has experienced back problems and did not appear to have his usual fluid motion during last week’s Cherokee game. Cuttler is the Halfback that really makes the Robbinsville Offense go. Rumors from Robbinsville say he is questionable for playing in this week’s game. One person does not make an 11-man team, but compared to many teams in this region, Robbinsville really needs Cuttler Adams. My guess he will follow the legacy of many Black Knights that wanted to play through sickness and pain and will find a way to suit up and do battle with the Bulldogs. I am reminded of Kurt Odom (played late in the 2000 decade and later played at Campbell Camels) who would not miss a play-off game at Elkin and was sick with mononucleosis. That’s the spirit of the Black Knights.

The Black Knight Offense will live on counters and power motions. Buck sweeps and counters will fall right into Murphy’s hands. The offensive front line is led by Carlos Wesley (#56 – 6’0 260 lbs. Senior) and Senior Center Carson White (6’3 315lbs). Robbinsville Quarterback Dasan Gross has completed about 61 percent of his passes. Gross has completed 36 of 59 attempts to collect 487 yards on passes, which averages 13.5 yards per completion. His longest pass was 58 yards. When passing, the Black Knight tend to go for shorter screen passes that help simulate some speed in the backfield. Junior Receiver Brock Adams is the favored target for a pass. Brock has caught 25 passes for 343 yards in five games and averages about 13 yards on each reception. Based on the average, Robbinsville is passing the ball about 10 times per game and completing six attempts to move the Black Knights about 80 yards per contest.

The Robbinsville Defense will have a 4-4 look and play cover-3 in the secondary. One method of attack from the Black Knights may include bringing Senior End Eddie Brooms (#42) to an assignment position and play man on Murphy Quarterback Kellen Rumfelt. This is the role Brooms played in Cherokee. Look for Cuttler Adams and Kage Williams to also play at linebacker. Brock Adams will add some speed in the defensive secondary at Free Safety.

The 56-14 win over Hayesville provided a lot of exercise for the Murphy Bulldogs to build its Offensive bandwidth. The linemen played excellent and helped power Juan Allen and Hunter Stalcup to great performances over the Yellow Jackets and build team unity. Murphy is still powered by its run game. Until last week the Bulldogs relied heavily on Running Back Ty Laney, who leads the team with 666 yards on 82 carries and averages 8 yards per rush. On half of the touches, Juan Allen is averaging 11 yards on 41 carries for 465 yards on the season. Sophomore Hunter Stalcup proved he will be a future offensive leader when he racked up 178 yards against Hayesville on 7 carries (average 25 yards per play).

“Our blocking was good (in the Hayesville game). We are finally getting the trap down, which our tackle is doing great, he’s getting his block and we have just had open field to run through,” explained Murphy Running Back Hunter Stalcup. Moving from a freshman on the junior varsity team to varsity this year is more responsibility and work according to Stalcup, but he is doing the work he wants to do. With Robbinsville Hunter says its discipline. “We just have to keep doing the same thing we are doing. Eleven people to the ball every play. But they (Robbinsville) can run it up the middle. Our middle linebacker, Ty Laney, he knows how to fill the hole. We should be good there,” Stalcup explained. Hunter likes how the Bulldogs are developing this season.

Going to the pass, Murphy Quarterback Kellen Rumfelt has maintained a balanced attack going to the air with a 52 percent completion rate (43 completions on 83 attempts) to give Murphy 843 yards in passing this season and 120 yards per game. Payton McCracken remains the team pass reception leader with 380 yards receiving or about 55 yards per game. Key for the Murphy Bulldogs is the pass is not necessarily an offensive attack that is relied upon for advancing the ball between the goal lines. The Bulldogs usually strike gold for a touchdown on its pass attempts, which is about 20 percent of the time.

The Murphy Bulldogs are developing well and building to the team it wants to be says Quarterback Kellen Rumfelt. “Offensively we are on point all night. The starters didn’t have to play but two and a quarter of a quarter. We didn’t have to pass that much, and our line was on point. We feel like we have gotten better every week, especially since (playing) Franklin. We remind ourselves about how we played, and we try to look back on that game and never play like that again. We are just going to keep getting better,” Rumfelt said.

Murphy is averaging 41 points per game and limiting its opponent to 28 points.

Getting the win over the opponent is going to be sweet. Building a position in the conference standing and keeping or building momentum to meet the next conference opponent may be more important. To face a few opponents in your future like Swain and Andrews, Murphy and Robbinsville may need a little more energy and boost in addition to figuring out the game plan. A win for either team Friday will provide the medicine needed to play the last two conference games of the season.  Swain County and Andrews have found some new life in their season or like the Wildcats having a near perfect season, until last week. There are no more “give-me” games in the Smoky Mountain Conference. Don’t overlook Cherokee; Swain County is not a pushover; and Andrews will run the ball down your throat.  Swain County may be worn out  by the last game as it will host Murphy on October 22; travel to Robbinsville on Tuesday, October 26; and finish the regular season hosting Cherokee on Friday, October 29th.  That’s three games in seven days.  Does all of that really matter, because in the southern mountains of western North Carolina we live on football.  “In the Smoky Mountain Conference, you are going to have a tough game every week and especially this year, which is pretty tough conference, and it usually is. We take one game at a time and our next game is the most important game. You have to win that one to get to the next one,” Coach Watson states.