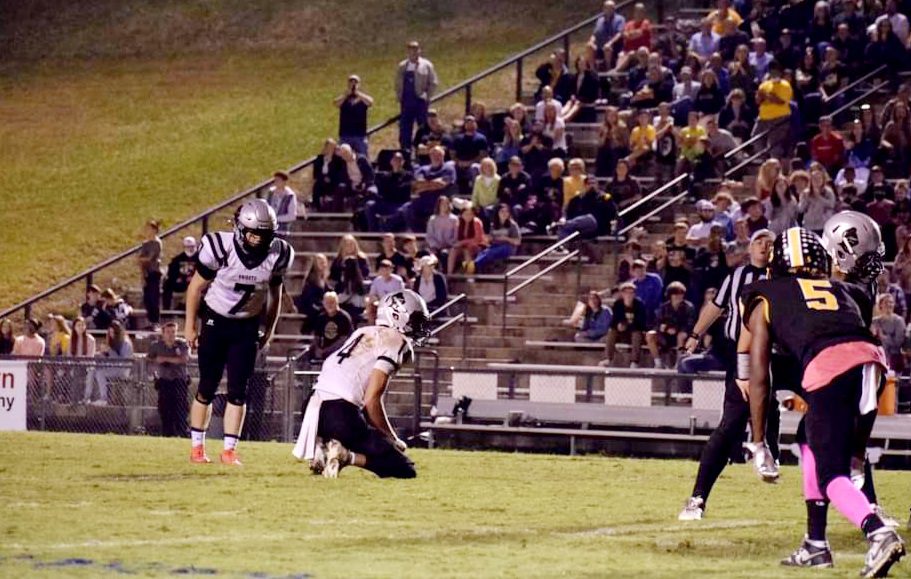 The Black Knights traveled to Murphy with nothing to lose. Everyone had already written them off. With 5 starters out while coming off back-to-back losses, things weren’t looking good in The Ville. Murphy was a heavy favorite heading into this one, and even some of the Black Knights faithful didn’t have a lot of confidence that their boys could pull it out. But that’s why they play the game. Robbinsville played 4 quarters of smash-mouth football. They played from behind for much of the game, but it never seemed like they were going to lose this game. Robbinsville simply wanted it more. Kage Williams put the team on his back, rushing for 134 yards on 19 carries, while also notching 2 scores. Jaret Panama also had double digits carries and was a wrinkle in the Black Knights offense that the Bulldogs defense definitely didn’t see coming. The big guys up front are always a problem, and Carlos Wesley and Carson White proved they are 2 of the top lineman in the area. Dasan Gross managed the game well at QB for the Knights, hooking up with Brock Adams 3 times for 40 yards. Robbinsville executed their gameplan to perfection and simply put: They outplayed Murphy in all 3 facets of the game. ESPECIALLY THE KICKING GAME. How about Senior Kicker Cody Kline!? Have a night young man. I haven’t seen a kid as clutch as he is in a long time. He was 3/3 on field goals, including the game tying 46 yarder and game winning 43 yarder as time expired. In my opinion, the Robbinsville team we saw tonight is the best team in the conference. It all depends on which Robbinsville team shows up.  I’m not saying Robbinsville is the best team in the SMC, as it stands right now Swain is the team to beat. But, this Robbinsville team that showed up tonight, they could definitely make a run at a state title. If they can prove that they can consistently bring IT like they did tonight, then watch out.

As for Murphy, some changes have to be on the way. Bulldog fans had hoped that the defense had figured some things out in their previous 2 games, but obviously they’re back to square one. If my math is correct, they gave up 250 first half rushing yards to a Robbinsville team that didn’t even have their starting back. That’s not winning football. That’s not Murphy football. They have to get back to their old ways if they want to compete. It starts with the little things like finishing a play when you’re 10 yards away from the ball, not jumping offsides when it’s 4th and 5, and keeping your composure when tensions rise. Giving up free yards to good teams, you’re just shooting yourself in the foot.

As good as this conference is this year, they are going to be in a dogfight every Friday from here on out. In their next game against Swain, it’s put up or shut up time for the Dogs. Time to show if you’re going to bounce back after a bad loss, or lay down and give up. My guess is the former. There’s some real Dogs on this team, they just need everyone to buy in. Don’t jump ship yet, there’s still a lot of football to be played.  An SMC title is still in play.

Pretty much what we expected from the Swain County Maroon Devils as they traveled to Hayesville to take on the Jackets. It was all Swain all night, as they beat Hayesville 42-14. The biggest takeaway for me in this one, is the fact that Swains offense showed they can put up points. The biggest question surrounding Swain this year was if their offense was potent enough to win SMC ballgames. If tonight was any indicator, the answer is yes. I know it was against a young Hayesville team, but if you’re a Swain County fan you’ve gotta be ecstatic about the way your offensive unit performed tonight.

It’s apparent their defense is one of the top in our area, and they’ll have to rely heavily on that defense to finish the year on top. I said it last week and I’ll say it again this week, they’re a team that finds ways to win ballgames. Its ugly, it’s not fun to watch (unless you’re a Maroon Devil fan), but it gets the job done. No one, aside from the Swain Co. faithful, thought that the Devils would be atop the conference at this point in the year- yet here they are. It’s their conference title to lose at this point, and I expect them to fight tooth and nail to keep it that way.

It wasn’t pretty, but Cherokee found a way to pull off a 12-9 win over Andrews despite turning the ball over 4 times. Usually when a team wins the turnover battle by as large of a margin as Andrews did tonight they come out on top, but Andrews offense just couldn’t get going. They sputtered from start to finish, and it was apparent their guys aren’t 100 percent. With as shallow as their roster is, they can’t just plug and play guys like some of the bigger schools in the area are able to. Still, an impressive performance from their defense kept them in this game, and they had a chance to put together a game winning drive as time was expiring but were unable to find the endzone. I know it’s back-to-back losses for the Cats, but I’m still a believer that they can finish strong. They’re a bounce or two away from being 7-0 instead of 5-2. Unfortunately for Andrews, they will travel to The Big Oaks next week to face Robbinsville. With as up and down as everyone has been this year though, who knows what will happen.

The current SMC standings are:

Grab your popcorn. The way things are shaping up, we could have a three way tie for first place in the conference. To finish the year:

In my opinion, Swain has the toughest schedule to end the year. They host Murphy next Friday, travel to Robbinsville the following Tuesday, and finish with Cherokee at home. If they are able to come out of that gauntlet undefeated, then they definitely earned the SMC championship crown that will be placed on their head. But, if they were to stumble then I think there would be a three way tie for first place in the SMC. If Cherokee, Murphy and Robbinsville all win out, then they will all finish with the same conference record.

There are a lot of different combinations that could happen, but the only thing for sure is that Swain controls their own destiny. They win 2 of the next 3, they’re standing atop the mountain alone as SMC Champions once again, in a year that most people picked them to finish dead last.