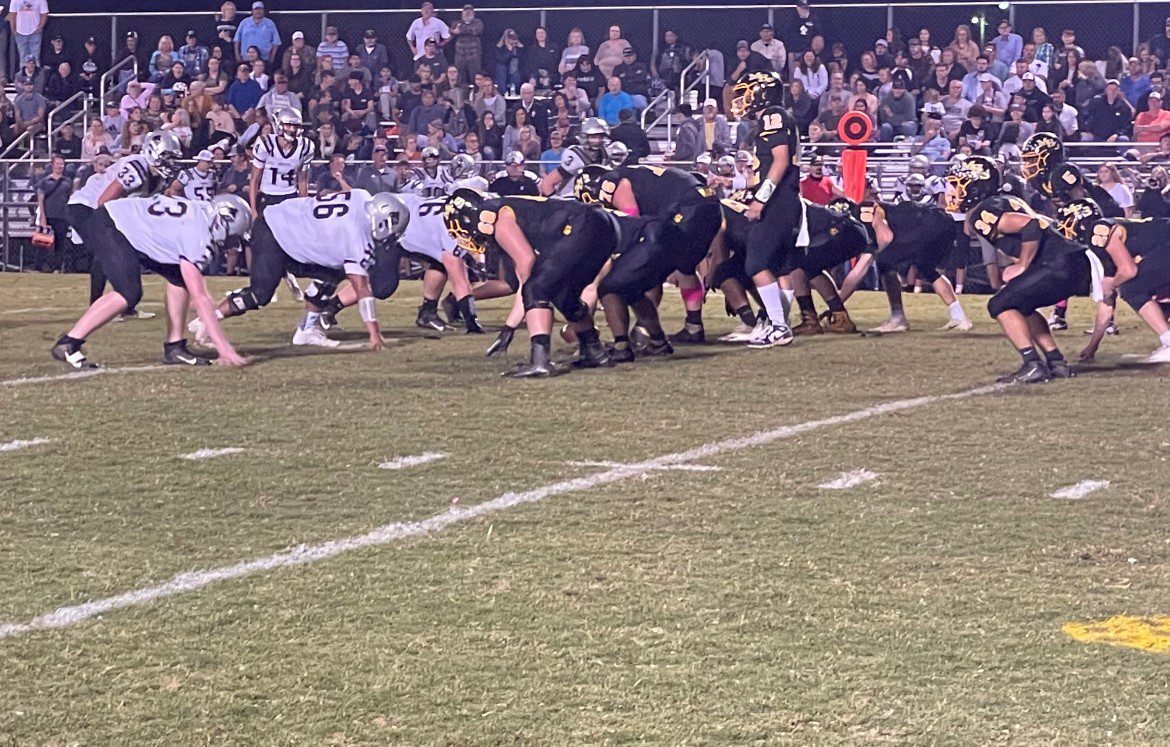 (Murphy) – – What has more leg than a bucket of chicken and uses the original recipe? Robbinsville Black Knight Senior Kicker Cody Kline is the answer. Cody Kline demonstrated through his junior year he can park the ball through the uprights with strength and style, this year there is nothing different for him. A 45-yard field goal from Kline proved he can hit the field goal. On cue, Kline nailed a 42-yard field goal as the time expired in the game to give Robbinsville the win over Murphy 23-to-20. That was the chip shot and dagger in this game. It is the original spice that football demands perfection in special teams. I won’t say Cody Kline will have a name change to Colonel Harlan Sanders, but his skill is “football-kickin’ good.”  The Black Knights rise to 3-and-3 on the season and 1-and-1 in Smoky Mountain Conference play.   Murphy will go to 5-and-3 and 2-and-1 in Conference play.

Scores and initial momentum were in favor of the Murphy Bulldogs. The Bulldog defense had its struggles with stopping Robbinsville offensive advances on the rush and pass.  When defense got the motor running to stop the Black Knights, it was not enough. “It was a hard fought game. We played well coming out of the start of the game and kinda tailed off and could never stop them. We couldn’t stop them enough and when we did, we couldn’t score. It’s a bad sequence of events and we have to do better,” Murphy Coach Joseph Watson stated after the game.

Robbinsville wasted very little time getting the offensive scoring and establishing the game temp. Black Knight Sophomore Running Back Kage Williams zipped down field 51 yards with 10:52 remaining the first quarter to score the game’s first touchdown. You could feel a silencing roar for the Murphy Bulldogs. Quick to answer back, Murphy Quarterback Kellen Rumfelt found Running Back Juan Allen on a 19-yard pass play to even the score. Trying to return the favor, the Black Knights offensive strike ended when Quarterback Dasan Gross was intercepted by Juan Allen. The Murphy drive went to the 2-yard line where Sophomore Running Back Hunter Stalcup carried the ball to the end zone. Will Joyner posted both PATs. At the end of the First Murphy led 14-to-7.

Defense, penalties, and some miscues are the highlights of the second quarter for both teams. Robbinsville worked diligently to go back to touchdown town but fell short about 25 yards. Black Knights Senior Kicker Cody Kline hit a 33-yard Field goal to make the only score in the quarter. Murphy had a full head of steam to the end zone and penalties set the Bulldogs back. Almost at the end zone door and Robbinsville Junior Wide Receiver Brock Adams picked off a pass intended for Juan Allen. The Half ended with Murphy leading 14-to-10.

Bulldog offense appeared to make a change and opened the Third Quarter will good energy and exercised its run and pass skills to post points during the first possession. Murphy Quarterback Kellen Rumfelt launched a 27-yard bomb to Wide Receiver Payton McCracken in the middle of the end zone. Will Joyner missed the extra point and made the score Murphy 20 Robbinsville 10 with 8:32 remaining in the quarter. It would be the last time Murphy would score. Close to the end of the quarter Robbinsville would go into the end zone and have the touchdown called back on a penalty. The Black Knights jousted again to run Kage Williams into the touchdown town. Kline hit the PAT to pull Robbinsville within three and end the period Murphy 20 Robbinsville 17.

Touchdowns didn’t come to either team in the fourth quarter. Robbinsville’s Kline tied the game after both offenses struggled to move the ball. He parked a 45-yard field goal with about 7:00 to go in the game. Penalties and setbacks to both sides started to breed the idea there would be an overtime period. Instead, Robbinsville was able to complete a pass from Black Knight Quarterback Dasan Gross to Isaac Wiggins in the middle of Murphy territory. Robbinsville exercised excellent clock management and placement of the ball to set up Cline for a field goal and slam the door on Murphy mounting a comeback. Final Score: Robbinsville 23 Murphy 20.

Payton McCracken had 6 receptions for 120 yards (One for Touchdown)

Juan Allen had 2 receptions for 39 yards (One for Touchdown)

Hunter Stalcup had 2 reception for 28 yards

Will Johnson had two receptions for 18 yards

Brock Adams had 3 receptions for 39 yards

Alexis Panama had 2 receptions for 17 yards

Jaret Panama had 1 receptions for 0 yards

The Conference and Next Games

The next few weeks leading to the end of the season will be interesting. It might be like running through hades with gas on your pants. In fact, the Bulldogs will face the Devils in Swain County on Friday (October 22, 2021) and the Robbinsville Black Knights will face Andrews this coming Friday and a few short days later face Swain County, both games under the Big Oaks. Swain and Robbinsville will play three games in seven days. Winning games, staying healthy, and maintain momentum will be a challenge for these two teams. With this many games, something has to ignite.  We live in interesting times in the Smoky Mountain Conference.  Stay connected to Team FYN Sports for previews and more details on these and other games.