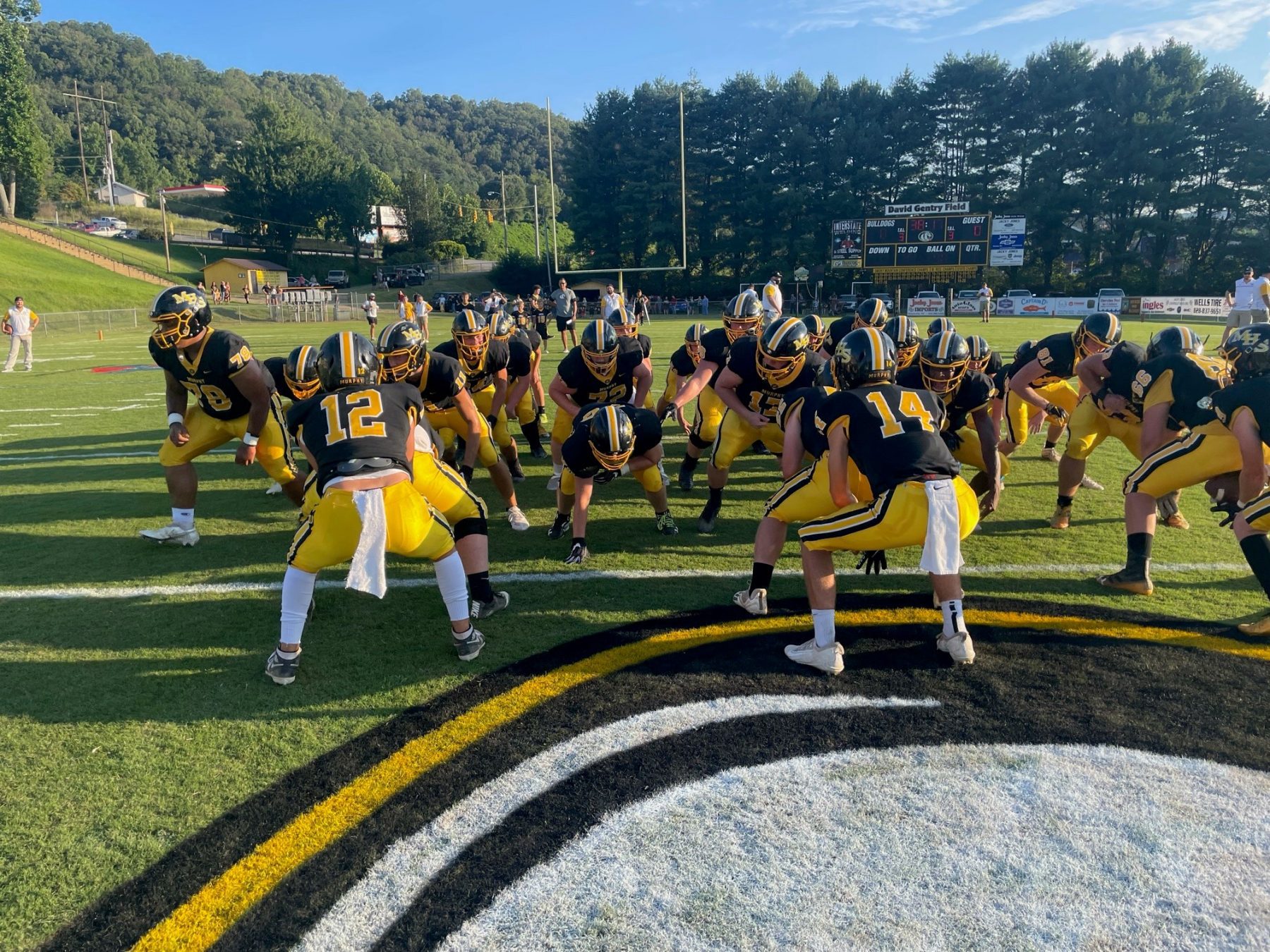 (Murphy) – – The Murphy Bulldog Football Team must have Greek ancestors as they annihilated the (Alleghany) Trojans 58-to-20 in Friday night’s battle. Murphy didn’t use a wooden Bulldog to roll in its battle plan, which was quick and not quite as ruthless as the battle in ancient Troy. The Bulldogs were quick to attack and achieve position to take a commanding lead at halftime which led to a rolling clock in the second half. 57 points were scored in the first half, 50 belonged to Murphy. At times Murphy’s defense would allow some big Alleghany plays to occur, only to see the Trojans mishandle the ball and make costly turnovers to the Bulldogs who translated their turnovers into touchdowns. The Trojans, like the ancient battle, may have had two surviving soldiers that made an impression. The Alleghany versions of Aeneas and Antenor were Quarterback Nick Rea and Running Back Austin Love. After this battle, the Bulldogs will continue its battle, let’s hope it is not a 10-year trip like it was for Odysseus. The Murphy Bulldogs (7-and-4) will make a long trip to Mountain Heritage this coming Friday for its next battle. More details on the Mountain Heritage Cougars in a few.

By the time we reached the end of the first half, I was thinking so much time had elapsed that I would look down and see the Watson Twins (Brady and John-Parker) would have had time to grow up and become members of the varsity football team. The first half took slightly more than 90 minutes to play, and the cold was setting into the fans, who didn’t seemed to mind or leave. During the first half, eight touchdowns, penalties, time stopping plays, and some first downs made the clock creep along. Through the entire game Hunter Stalcup, Ty Laney, Payton McCracken, and Jonah Hedden scored eight of the 11 total touchdowns to lift the Bulldogs to victory.

Murphy wasted no time getting into Touchdown Town. Getting the first possession, Murphy utilized less than a minute of game clock and the skill of Hunter Stalcup and Juan Allen to set the ball down at the Alleghany 10-yard line. From that point Ty Laney dashed into the end zone for the first score. Less than six minutes later Hunter Stalcup would run for 27 yards and his first of three touchdowns. Trojan Running Back Mack Lemasters ran a 19-yard pass play from QB Nick Rea for Alleghany’s first of only three touchdowns. It would be the only time in the first half the Trojans would score. On the kick-off, Ty Laney sprinted 70 yards score his second touchdown. The Trojans ended up giving the ball back to Murphy and allowed Juan Allen to run for a 21-yard touchdown, with 5 seconds left to go in the first quarter.

Alleghany carried its possession to start the second quarter, which didn’t last very long. Murphy picked up the ball and was able to give Hunter Stalcup opportunity to score his second touchdown. Less than three minutes later at 7:09 left to go until halftime, Bulldog Quarterback Kellen Rumfelt completed a 30-yard touchdown pass to Payton McCracken. Alleghany, deep in its own territory after kick-off fumbled. The turnover set up Hunter Stalcup for his last touchdown on 25-yard rush.

After a good stretch and a hot cup of coffee we were ready for second half, which finished about 30 minutes after it started with rolling clock situation. Murphy sidelined most of its starts in the third quarter, where neither team scored. Murphy exercised its second string and most of the young underclassmen including second string Quarterback Cole Laney. Freshman Jonah Hedden picked up his first varsity touchdown with 2:00 remaining in the game. Hedden broke a big rush play to place the Bulldogs on the 1 yard line. He ran the touchdown and the following 2-point conversion. When you’re hot, keep it going, and that led Hedden to his introduction as a Murphy running back. Alleghany scored twice in the fourth. The final score Murphy 58 Alleghany 20.

Preparation for Round Two

Murphy needed this win for more reasons than to stay alive in the state play-offs. If the advances, it needed all of the confidence and unifying play it can find, and getting to that point, it had to establish dominance early. “We came out here ready to play and we did our job. WE wanted to be a balanced offense. We got it going early. Offensive line did a good job. We are wanting to get better at running the Wing-T (offense),” Murphy Head Coach Joseph Watson stated after the game. Watson like the work his offense put out, especially Kellen Rumfelt, Hunter Stalcup, Ty Laney, and Payton McCracken, the usual suspects that when they play well the team is successful. But Coach Watson it has been a long time since Murphy has faced Mountain Heritage, much less up in Burnsville. “We have seen them, and they have really good football teams. We are excited to be able to go up there and play them,” Coach Watson added.

The win over Alleghany was a lifting shot in the arm for Murphy. “We came out for the first three snaps and gave it 100 percent. It was good to have a game like this that is not nail biting,” Quarterback Kellen Rumfelt stated. For Rumfelt it was a good night with 5 of 10 passes complete for 95 yards and a touchdown pass to Payton McCracken and to orchestrate another 375 yards of rushing offense.

Hunter Stalcup has been building an impressive set of stats across his first year of varsity football. He led the night with 116 yards of rushing offense on 7 caries for an average of 16 yards per carry. I almost forgot, he had three touchdowns too. Hunter credited the line for his success saying, “Our linemen came out and dominated. The trap was wide open all night, everything was wide open.”

Keeping the team moving and focused is going to a major chore for team leadership. Once your team wins you can’t forget to maintain focus and play through the long ride to Burnsville this coming Friday (November 12, 2021). “You have to play the bus ride. I think this senior class, we have done quite a bit (to provide leadership). Hopefully we can lead these guys. Sometimes these (younger) guys lead us. They are right there with us,” Senior Wide Receiver Payton McCracken said after the game.

The Mountain Heritage Cougars improved to 8-and-2 on the season and finished 2nd in the conference. The Cougars crushed the Albemarle Bulldogs in Burnsville 51-to-nothing. There is no easy way to get to Mountain Heritage and playing in the bowl of a stadium, you feel the unique mystique of competing against the Cougars, there is no easy way to win. Like a lot of teams this season, this team is led by its Quarterback Gabe Silvers, who will remind you a lot of Don Bradley. Silvers is like a silver streak if you don’t play your assignments. He has a 50 percent passing average and leads the team in rushing with nearly 1200 yards to this point in the season. When I covered the old Western Highlands Conference, this is team that can be big, fast, and tough. This won’t be an easy game to play. . .well from here on out, generally, the next team you face is better than the last. Stay encouraged and Go Bulldogs!  And stay connected to Team FYN Sports.  We will bring updates from this game to you.