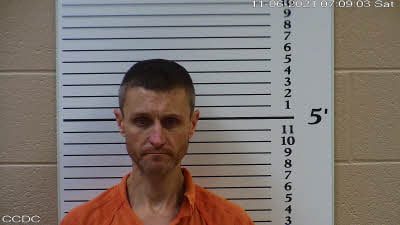 CONCERNED CITIZEN TIP NETS ARREST FOR TRAFFICKING IN HEROIN
Murphy, NC— Sheriff Derrick Palmer announced the November 06, 2021 arrest of Richard Glenn Scroggs, a 37 year old male who listed a Hayesville, North Carolina address, for violations of controlled laws of the North Carolina General Statutes.
On November 06, 2021 a concerned citizen called in a report of unconscious male in a motor vehicle in the Upper Peachtree area of Cherokee County. Deputies responded to the reported location and found Scroggs in an apparent unconscious state. Upon knocking on the window Scroggs became awake. Cherokee County Emergency Services were called to the scene and offered medical assistance to which Scroggs refused.
Located in plain view inside the vehicle Scorggs had been occupying, were articles which are commonly associated with the illegal use of controlled substances. A probable cause search of the vehicle located a trafficking amount of suspected heroin along with items normally associated with the illegal sale and delivery of controlled substances.
Scroggs was taken to the Cherokee County Detention Center where the North Carolina Magistrate issued orders of arrest for: Trafficking in Opium or Heroin, Possession With The Intent to Manufacture, Sell or Deliver Schedule I controlled substances, Possession of Schedule I Controlled Substances, Maintaining a Place Controlled Substance and Possess Drug Paraphernalia. The North Carolina Magistrate placed Scroggs under a $50,000.00 secure bond. Scroggs is scheduled to be in Cherokee County District Court November 23, 2021 at 9 AM.
Sheriff Derrick Palmer stated “Good work by our Uniformed Deputies not only in preventing the illegal distribution of these deadly drugs but summoning medical assistance to ensure the safety and welfare of suspect. We thank our concerned citizens for their support and encourage continued reporting of this and all crimes.”
To report suspicious activity and suspect violations of the law please call 828-837-1344 or submit a tip at [email protected]
Cherokee County Detention Center Cherokee County Sheriff Department concerned citizen drug trafficking Richard Glenn Scroggs Sheriff Derrick Palmer Trafficking in heroin