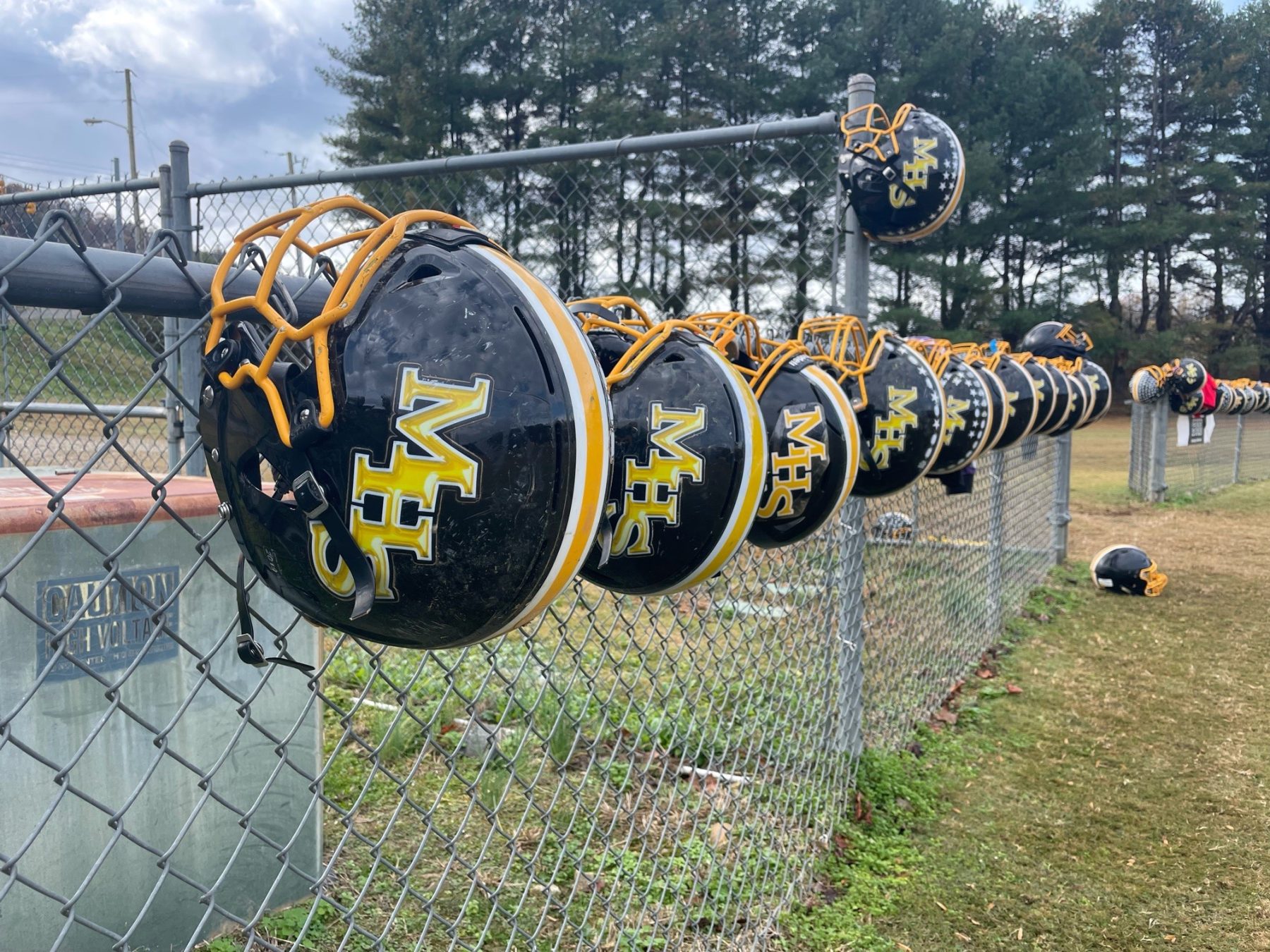 (Burnsville) – – You were scared, huh? Don’t be scared. That memorable line from the 1999 movie Life struck me as the week passed and the Murphy Bulldogs (8-and-4) arrived at Burnsville Friday night to play Mountain Heritage High (8-and-3). Fans from the barber shop to parents arriving at the game had a wonder in their mind that Murphy would suffer a loss and the season would come to an end. The fear of losing was real. Mountain Heritage has played well in the playoff, and a visit to the state championship game recently. It was about 1990 since the Murphy last faced this team. The Cougars have a highly regarded team that plays very physical with a skilled quarterback. The Bulldogs had a great week of practice, and you couldn’t find any fear or ambivalence in their face or mind. Huh-uh, don’t be scared. Not letting mistakes or setbacks stress the team and having no fear to finish the drill, Murphy is now making plans to travel the third round of the state 1-A playoffs after a 22-to-10 win over Mountain Heritage.

The battle in Burnsville between the Murphy Bulldogs and the Mountain Heritage Cougar tested defense and the offenses to maintain the ball after the game recorded five first half turnovers (Mountain Heritage 3 Murphy 2). It was not the best start for Murphy. Mountain Heritage melted about 4:15 of first quarter clock to produce no score and punt the ball to the Bulldogs. Murphy started out with a holding penalty and capped its first possession off with an incomplete pass. The next possession for the Cougars was ill-fated as they turned the ball over to Murphy on a fumble. Looking to draw first blood, Murphy Quarterback Kellen Rumfelt was intercepted by Mountain Heritage defender Griffin Ray for a pick 6. Quarterback Gabe Silvers ran in a 2-point conversion. That would be the only touchdown Mountain Heritage would score. Not wasting time, The Bulldogs moved the ball down to the 11-yard line where Rumfelt would strike gold by launching a pass to Receiver Cole Laney. Hunter Stalcup ran the 2-point conversion to tie the score 8-to-8 to end the First Quarter.

Mountain Heritage continued to test the Bulldog defense through the remainder of the game. The Cougars, on most possessions, held the ball for long periods of time, getting close or into the red zone, only to turn the ball over or punt. Murphy intercepted Gabe Silvers twice in the second quarter. Hunter Laney’s interception with about 3:00 remaining. Big play time for the Bulldogs as Kellen Rumfelt completed a 53-yard pass play to Will John that set up last score of the first half. Rumfelt went back to the air for a 9-yard pass play to Juan Allen and a Will Joyner PAT that gave the Bulldogs the half-time lead, 15-to-8.

The Cougars could not generate the offense it wanted in the second half. Murphy was slow to start the second half and punted to the Cougars. Mountain Heritage suffered the sting of Murphy’s defense, a penalty, and finally an incomplete pass and turning the ball over the Bulldogs near mid-field. The Bulldog offense brought fans to their feet. Kellen Rumfelt zeroed in on Payton McCracken for a pass play that took Murphy to the Mountain Heritage 13-yard line. With 6:35 remaining in the Third Quarter, Rumfelt launched a TD pass to McCracken from 10-yards out. This was the most efficient series of the night with Murphy going 50 yards on 3 plays using 1:12 to get into touchdown town. This would be the last touchdown scored in the game. Murphy led Mountain Heritage 22-to-8 at the end of the Third Quarter.

Trailing by 14 points going into the Fourth Quarter, Mountain Heritage remained in its offensive scheme of using lots of time during its offensive possession. Throw in a few penalties, incomplete passes, and a few miscues, the Cougars backed themselves into a corner they could not free themselves. Late in the fourth quarter, Mountain Heritage had momentum and was racing to the end zone, when it decided to go for a Gabe Silvers pass. Juan Allen slammed the door on any further hopes of the Cougars scoring by intercepting Silvers’ pass. With time whittled down to a minute, Murphy had to melt the clock and end the game. The Bulldogs could not avoid giving up a safety to Mountain Heritage to end the game 22-to-10.

Take-Aways from the Game

The game appeared to be controlled by Murphy the whole night through. It was a physical game that was not the easiest to win. “It was a hard fought game. They (Mountain Heritage) are a good football team. We knew they were going to come play hard and they did. It never felt like we had control of the game until right at the end. It was one of those playoff games that you have to keep playing,” Murphy Head Football Coach Joseph Watson stated after the game.

Murphy Quarterback Kellen Rumfelt has the ability to make some magic happen with three touchdown passes in key moments of the game to give the Bulldogs the go-ahead. Kellen was intercepted twice and blocked on another pass play. Here is where one can’t be scared. “Well in my mind what I think if I make a mistake is it’s not going to help anybody if I linger on that. Just make the next play,” Rumfelt stated after the game. What is impressive is he boxed those things away and danced through the remainder of the game like Fred Astaire singing in the rain.

Getting the Bulldog defense moving to stop Mountain Heritage was a challenge. Even though Payton McCracken was key on a touchdown pass play, getting defense jump started was key. “We came out a little slow in the beginning. We had a good game plan coming in, but I think we really came out and executed that well and we just played Murphy football. Like the same on defense and offense we started out slow. But then we just kept going and picking it up as the game went on and things started clicking,” McCracken said. One thing the Murphy Bulldogs had was a unified scheme and no fear to move through the game, which added to its moment.

Pressure on the Cougars was evident. Murphy played great assignment football and utilized its defense well. The linemen took a beating, but it caused a number of incomplete passes, fumbles, and busted plays through the great efforts of Ty Laney, Rylan Smith, Chandler Wood, Tryntden Moss, and Jeremiah Dickey. The icing on the cake was Juan Allen intercepting the last pass from Gabe Silver to seal the win. “I think was us playing good defense all night. Our line showed up and stopped everything they could do except a couple of plays,” Juan Allen said after the game. Oh, I forgot Payton added he taught Juan everything he knows about football.

Payton McCracken had 3 receptions for 50 yards (One for Touchdown)

Will Johnson had 1 receptions for 53 yards

Cole Laney had 1 reception for 43 yards (One for Touchdown

Juan Allen had 2 receptions for 20 yards (One for Touchdown)

The Murphy Bulldogs will have an even longer big bus ride this coming week with Eastern Randolph the number one seed. Ramseur, North Carolina is home to the 10-and-0 Wildcats. Eastern Randolph slammed Draughn 55-to-20 in its first game in the playoffs since it had a bye week in round one. Ramseur is located southeast of Greensboro near Asheboro. More details on the highly skilled Wildcats this coming week. Stay connected to Team FYN Sports for details, and don’t be scared.