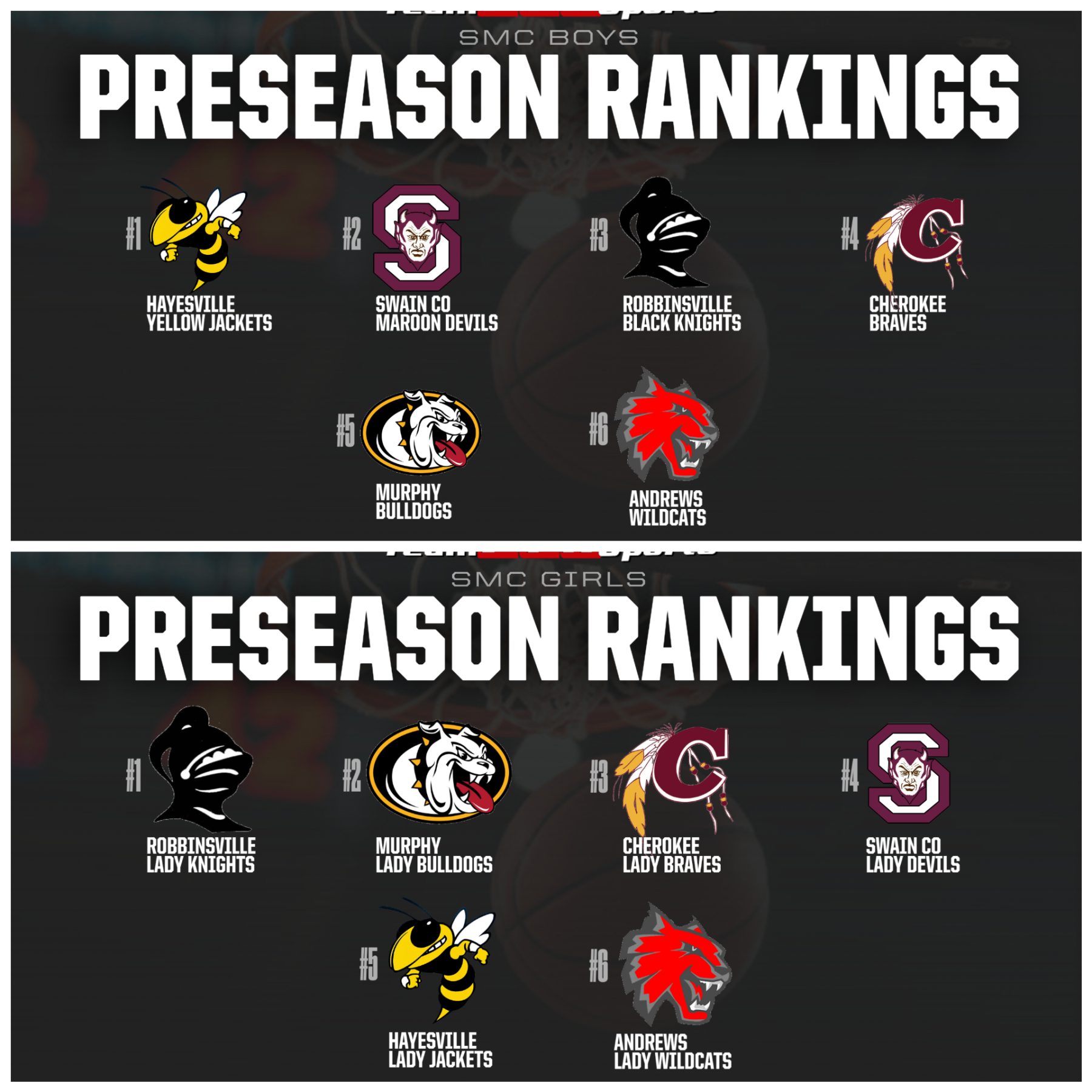 Now that football is finally over for our Smoky Mountain Conference teams, the athletes are hitting the basketball court in full force. We wanted to give a little bit of notoriety to these young athletes as the season gets underway and give the fans a heads-up on what to watch for this year, so, without further ado here are our #TeamFYNsports preseason rankings and Player of The Year Award Watch-lists.

Our Preseason rankings were compiled using last year’s final standings and key returning players, while we also tried to take into account any newcomers to the team that we were made aware of. (These rankings are the opinions of our writers and are made in good fun.) 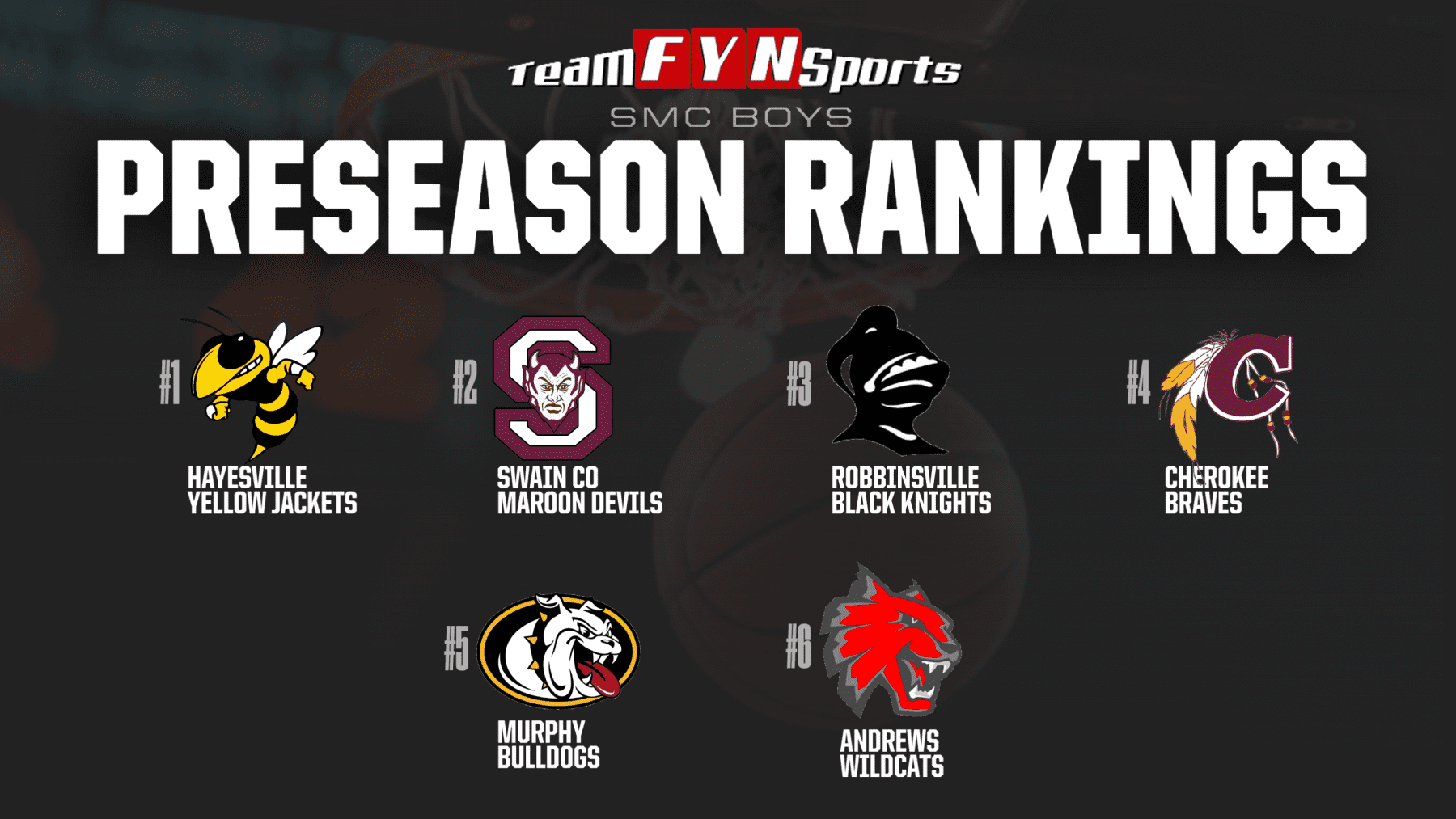 The obvious choice for Top Team in the conference here. They went undefeated in conference play last year, and also got D-1 talent Jake McTaggart back for his Senior year. Hayesville also added a knockdown shooter in Smoky Mountain High transfer Ethan Hooper, who will really allow them to stretch the floor. Led by returning leading scorer and Palm Beach Atlantic commit Kolbe Ashe, the Yellow Jackets seem to be the real deal heading into this basketball season.

After a disappointing third place conference finish last year, the Maroon Machine seems to have reloaded and revamped. Donnavin Groenewald, who missed last year’s basketball season, is back on the hardwood and ready to make the most of his Senior season. He is joined by the two big guys down low for the Maroon Devils, Isaiah Collins and Nathan Bogdanowicz, along with do-it-all athlete Cooper Hyatt on the wing. Be sure to watch out for these guys this year as they make a run at a SMC title.

The Black Knights were my choice as the number 2 team in the conference, but the rest of the staff thought otherwise and here they are at number 3. With the likes of Kamdyn Jordan, Brock Adams, Dasan Gross, Eddie Brooms and several others returning, I believe that Jake Beasley’s Knights have just as good of a chance as anyone to finish at the top of the conference. It wouldn’t surprise me to see them start out slow out of the gate because of how deep of a run they made in the football playoffs, but even if this team can’t win an SMC crown because of a slow start, they should be poised to make a splash in the State Playoffs.

Obviously not off to the hottest start, Cherokee is currently 1-2 on the year with losses to Franklin and Pisgah. However, after a blowout loss to Franklin, they lost a nail-biter by just 3 points to Pisgah after mounting an incredible second half comeback. They’ve since gone on to blowout Highlands 56-35, and will try to avenge that Pisgah loss this Tuesday at home against the Black Bears. Led by their two guards Jordan Arkansas and Donald Bradley, this Cherokee team has the athletes to compete with anyone they line up against.

Murphy falls from finishing #2 last year to #5 in our Preseason rankings mostly due to the fact they graduated their leading scorer in Abram Abling, along with 7 other seniors. It will be hard to replace those guys for sure, but they do have some ball players on this year’s team. Hunter Laney, Dom Rummler, and Zach Skogen are guys who are all over 6 foot 4 and that height will be hard for other teams to handle. They will need some really good guard play from Dillian Brown and Cole Laney to complement those bigs, so we will see if they can put it all together. They started their season off with a somewhat surprising win over 2A Fannin County, so don’t count out the Dogs just yet.

Honestly, we just ran out of room to put teams on this list. Do I think that Andrews is the worst team in the conference? No. But we just couldn’t justify putting them ahead of anyone else in the preseason rankings due to the fact that so much is so unknown about this team. Size is going to be the “it” factor for Andrews. They’re severely undersized, but I think we could see first year Head Coach Matt Maennle use that to his advantage some this year. Keagan Ellis and Cam Rattler are probably going to be the Wildcats leading scorers this year, but once Donovan Bateman, Drew and Austin Martin and Isaac Weaver are able to make the transition from football to basketball, they will have a lot of contributors on this team. Andrews is used to being the underdog, and with them coming in at #6 on our rankings, I think they’ll use it as more fuel to the fire. 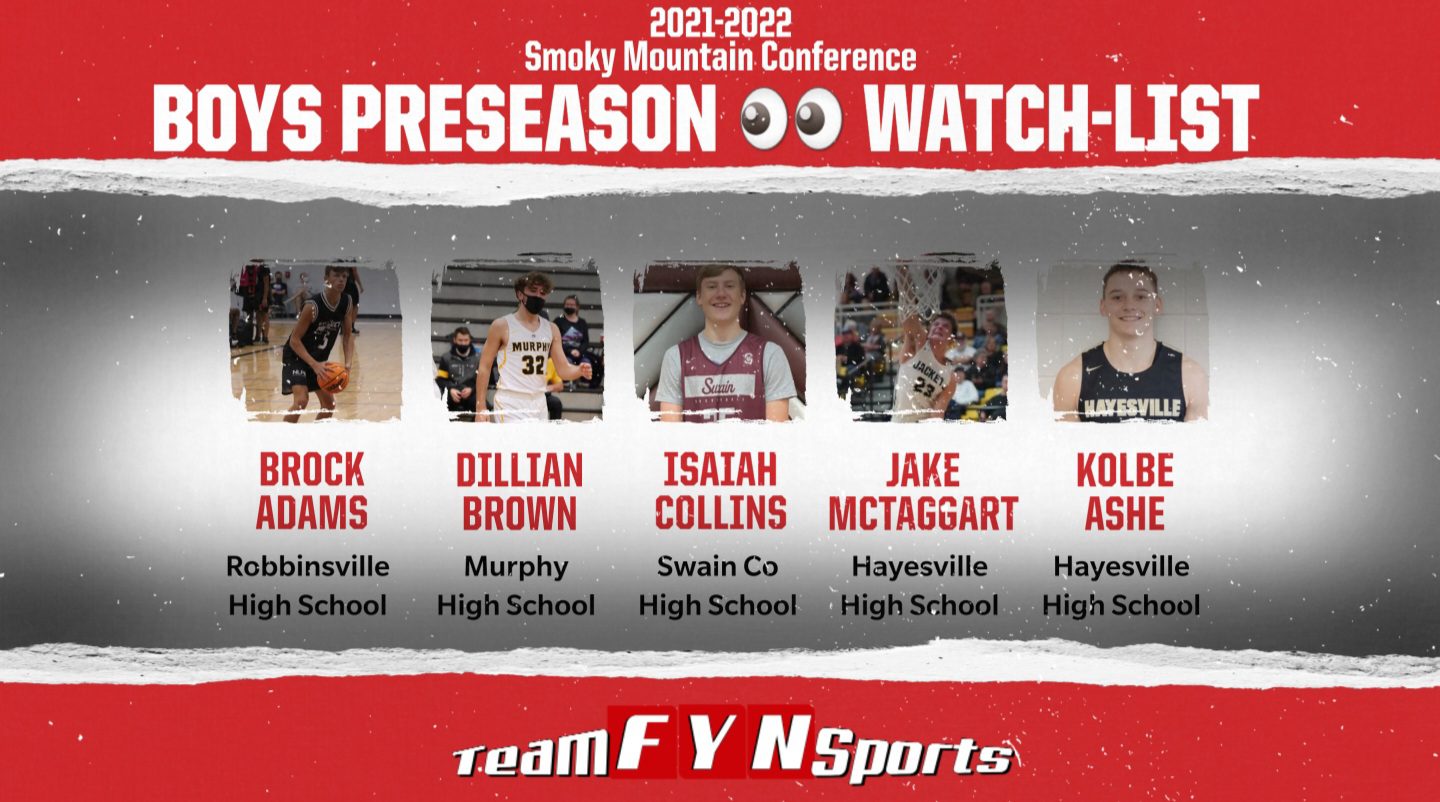 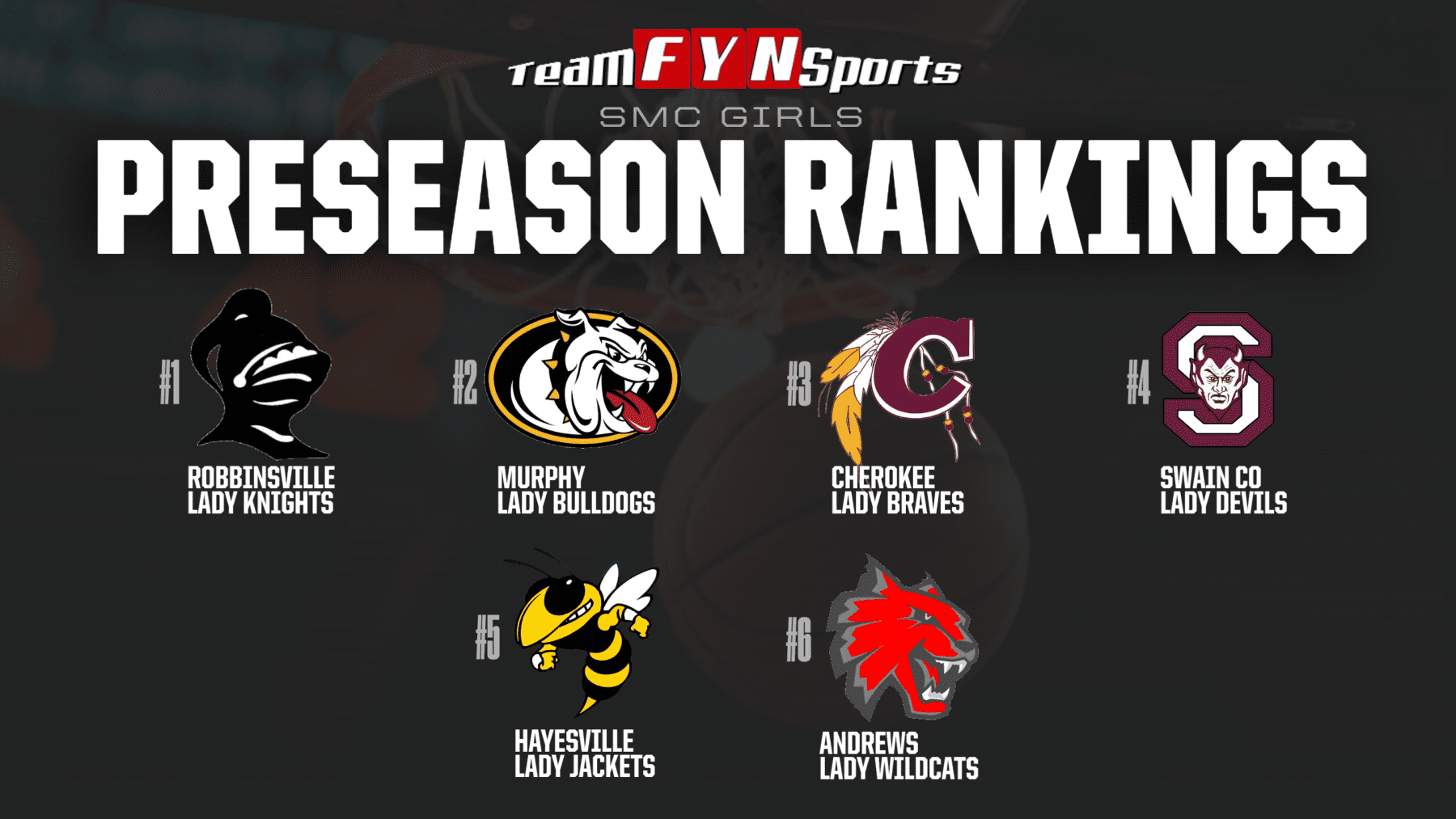 The defending Smoky Mountain Conference champs are back on top in our Preseason rankings. They return SMC player of the year Desta Trammell, along with Halee Anderson, Yeika Jiminez, and Kensley Phillips. The Lady Knights will rely on their lights out shooting once again to lead them to another SMC title, but will need some help down low if they want to fend off a Murphy team who knocked them out of the State Playoffs last year.

A shocker for some, but the 2x defending State Champs come in at #2 in our Preseason rankings. Reason being, they couldn’t seem to beat Robbinsville last year in the regular season- falling to the Lady Knights at home and on the road before finally beating them the third time around in the State Playoffs. Murphy also lost some key players in Sarah Pullium and Kaiya Pickens, so we need to see who is going to step up and fill those shoes before putting them above Robbinsville. Senior Richmond commit Torin Rogers is returning however, and she will have to show this young team the ropes in order for them to make a run at a third straight State Title. Freshman Addie Johnson will likely be one of Murphys top scorers by seasons end, so don’t be surprised if you start hearing that name a lot down the stretch. The Lady Bulldogs are off to a pretty good start to the season already, defeating 2A GHSA State Runners-up Fannin County on Saturday by double digits.

The Lady Braves should make their return to top 10 in the state this year. It just so happens they also play in a conference with 2 of the top 5 teams in the state, ergo they come in at #3 in our Preseason rankings. AJ Hill and Leilaya McMillian will look to help the Braves play spoiler this year and knock off Murphy and Robbinsville for a SMC championship. I’m telling you, don’t sleep on the Lady Braves this year. They are definitely going to surprise some people.

It’s probably going to be much of the same for the Lady Maroon Devils this year. A middle of the pack finish for this team is probably their ceiling.

Hayesville has some pretty good ball players returning in Lila Roberts and Lila Payne, but I don’t think they have team that is polished enough to compete for a conference title. I will say this, they look like they could get hot and ruin some other teams title hopes.

The Andrews Lady Wildcats are turning a corner, and head coach Eric Duong has them moving in the right direction. They’re still a couple years away from making any real noise though with as talented as this conference is in girls basketball. 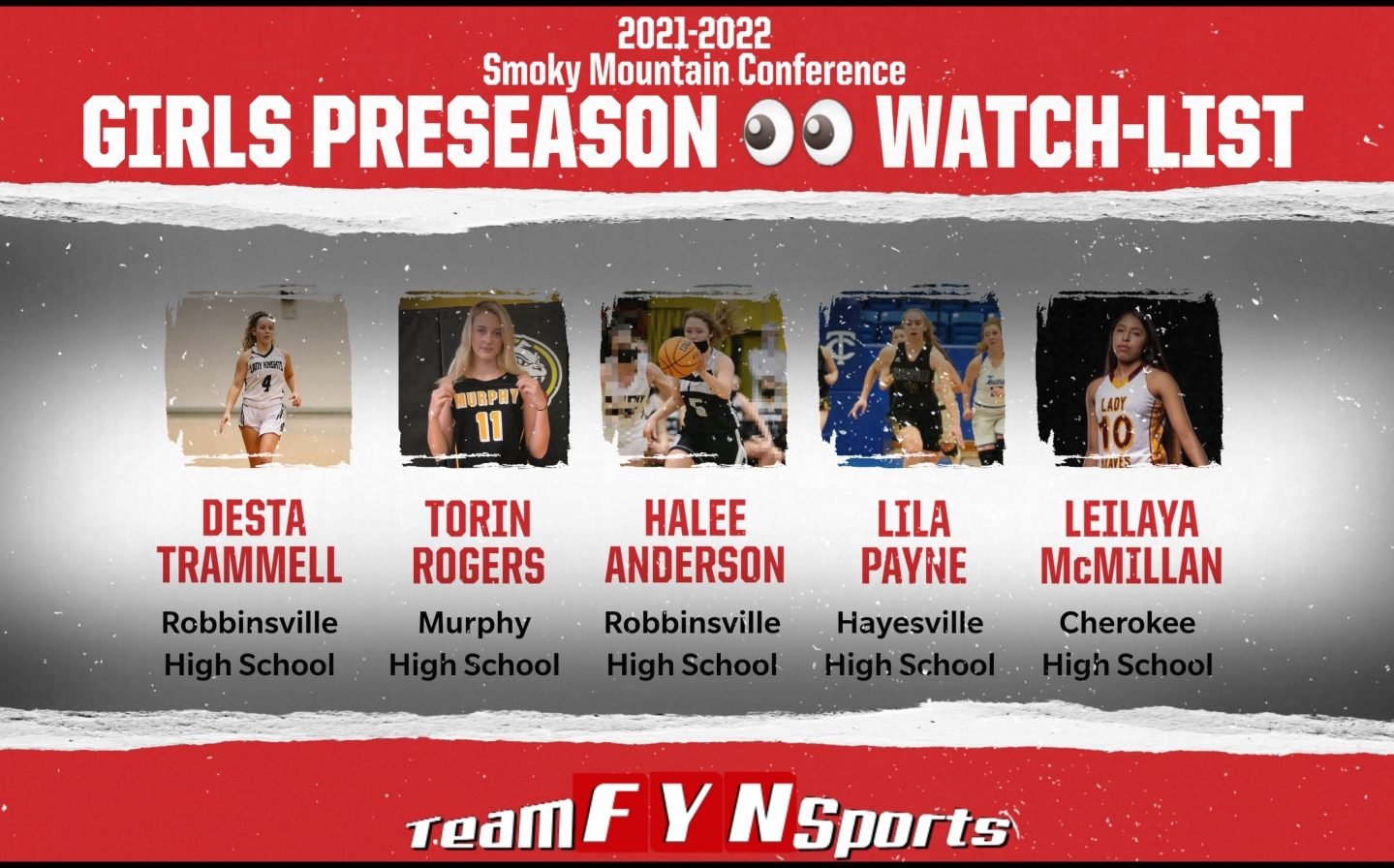