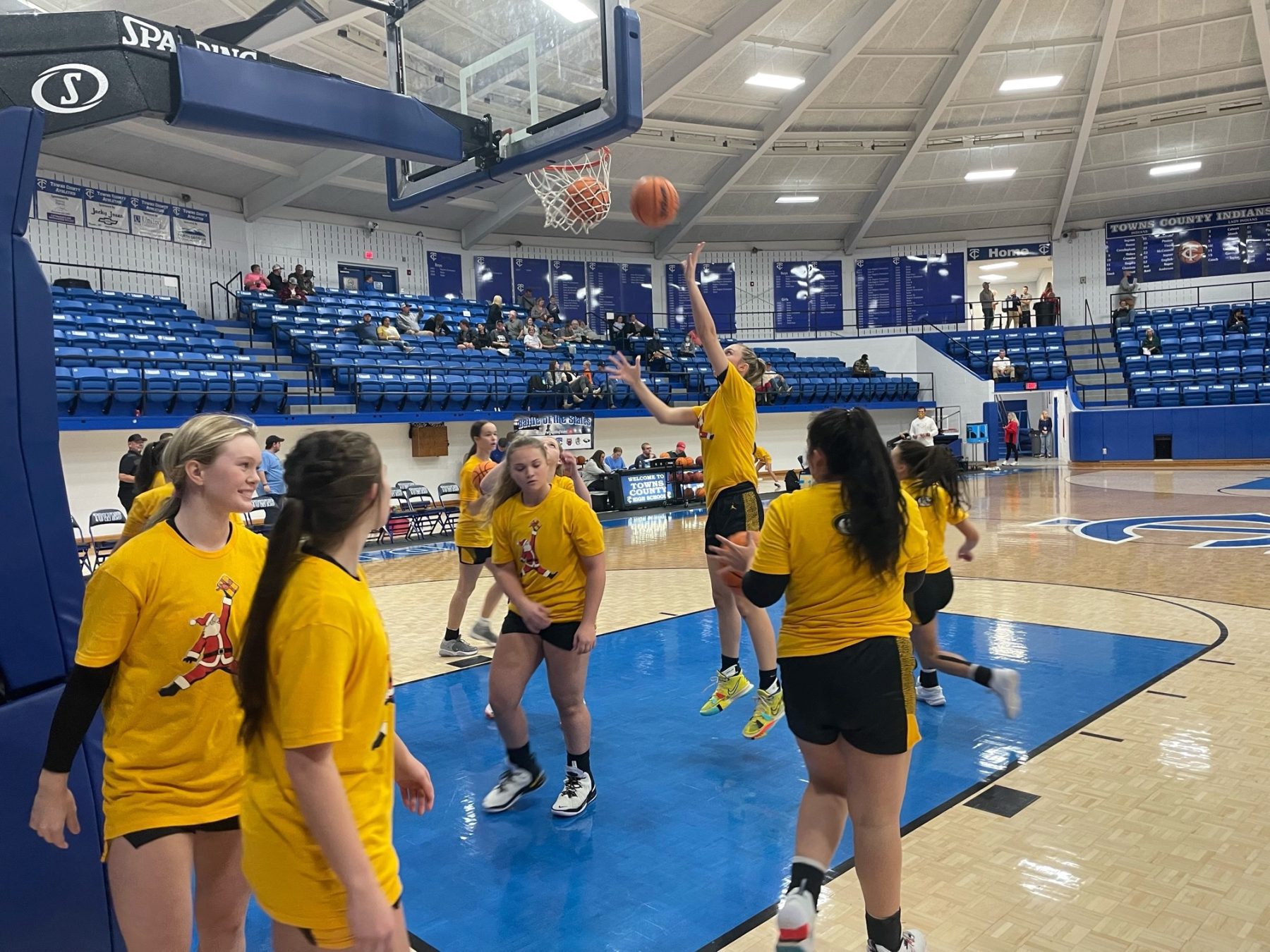 (Hiawassee, GA) – – Step right and come on in, the Murphy Bulldogs took the grand tour of Battle of the States in from of a mixed audience of fans from North Carolina, Tennessee, Georgia, and South Carolina.  The Lady Bulldogs and Bulldog (Boys) posted good wins against their common opponent, the Coosa High Eagles, from Rome, Georgia.

George Jones wasn’t coaching, but in the girls’ game, he would have said the Lady Bulldogs were hotter than a two-dollar pistol in shooting and they were the fastest things around.  It rained three pointers to begin the game; a totally fast paced game that had the Lady Eagles struggling to keep up; and good inside outside play.  The first period ended with Murphy 20 Coosa 2.  During the second period the Lady Bulldogs and Lady Eagles kept pace with each other and played more diligent defense.  Murphy led 34-to-12 at the half.  Another flurry of 3-pointers and defense that kept the Lady Eagles out of the paint in the third period put an end to the starter’s appearance in the game.  Torin Rogers ended the night with 19 points, Addie Johnson 13, Lailee Holloway 12, and Amber Martin 9.  With both sides playing substitute players, defense was key by slowing the pace of the game and limiting the scoring.

Getting the eighth win of the season was good after a short lay-off period for the Lady Bulldogs according to Murphy Head Coach Ray Gutierrez stated.  “We had a good start.  You know we had a big break from Christmas.  You we came in and got some good shots in and a good practice yesterday.  Having that four-day lay-off worries a coach when you hit the floor again.  But you know we had a big first quarter and started the game 20-to-2.  I thought the kids played really well.  I’m proud of them that we came here and got a win.  I really love this tournament.  They (Towns County High School) do a good job of hosting it.  We are pumped to play in the semi-finals,” Gutierrez said.  You may access Coach Gutierrez’s comments at the link in this article.

The Lady Bulldogs will face the Pendleton, South Carolina Lady Bulldogs.  Pendleton High defeated Town County Lady Indians 56-to-37 to advance to the semi-finals.  Pendleton has an 8-and-4 record after the win over Towns County. Bulldogs Senior post player Somarian Webb was unstoppable.  She finished the night with 20 points.  The only chore the other players had to do was send the ball to Webb and let her head to the basket for two.  The game is scheduled for Wednesday night (12-29-2021) at 7PM.  This game will be worth your admission to see.

Well, the race was on, and pride was headed up the back stretch for both the Coosa Eagles and Murphy Bulldogs in the boy’s game.  The only issue was heartache hit the Eagle on the inside.  Murphy and Coosa matched each other point for through most of the game.  Shooting percentage from the paint was not the greatest as each team stressed to find its rhythm and chemistry in the game.  Three-point shots from Dillian Brown and Zack Skogen kept Coosa on its toes and gave the Bulldogs a slight advantage.  After the first period Murphy led 21-to-18 and 42-to-38 at the half.  Where the real heartache in the second half came in the inside was Zack Skogen and Dominick Rummler, Murphy’s towering low post players battled the board and hits their shots and free-throws.

The run that separated the Bulldogs and Eagles came at 6:10 remaining the fourth period.  The Eagles tears were holding back trying not to fall.  In the next two minutes, Murphy outscore Coosa 10-to-nothing to establish a lead that would not fall.  The 78-to-68 win was needed for Murphy to break a losing-streak.  “It was a good game. They were very good and pretty fast.  They run the pace pretty good.  We have good people, good guards, and good posts.  We have been on a losing-streak, and we are finally starting to click,” Murphy Junior Point Guard Dillian Brown explained after the game.  His entire interview can be found at the link in this article.

The win for Murphy come as good medicine for a season that has had some losses that could have been Ws instead of Ls.  Murphy Coach Eric Laney said after the game, “I think at this point we have struggled through some games and losing some really close games.  So, what we are communicating as coaches to our kids is in those close games what the deciding factor is not always the last 30 seconds, it’s the first 31 minutes.  Getting one more stop, getting one more defensive rebound in those minutes will help you toward the end of the game more so than the last 30 seconds.”  Coach Laney’s full comments are also located at the link in this article.

The Murphy Bulldogs will play in the last game of the day against the Towns County Indians who defeated the Pendleton SC Bulldogs 59-to-49.   The Indians improve their records to 6-and-4.  The Bulldogs will need to work to contain the scoring of 6’3 Senior forward Collin Crowder who had 25 points.  Murphy and Towns County are scheduled to tip off at 8:30PM Wednesday night (12-29-2021).