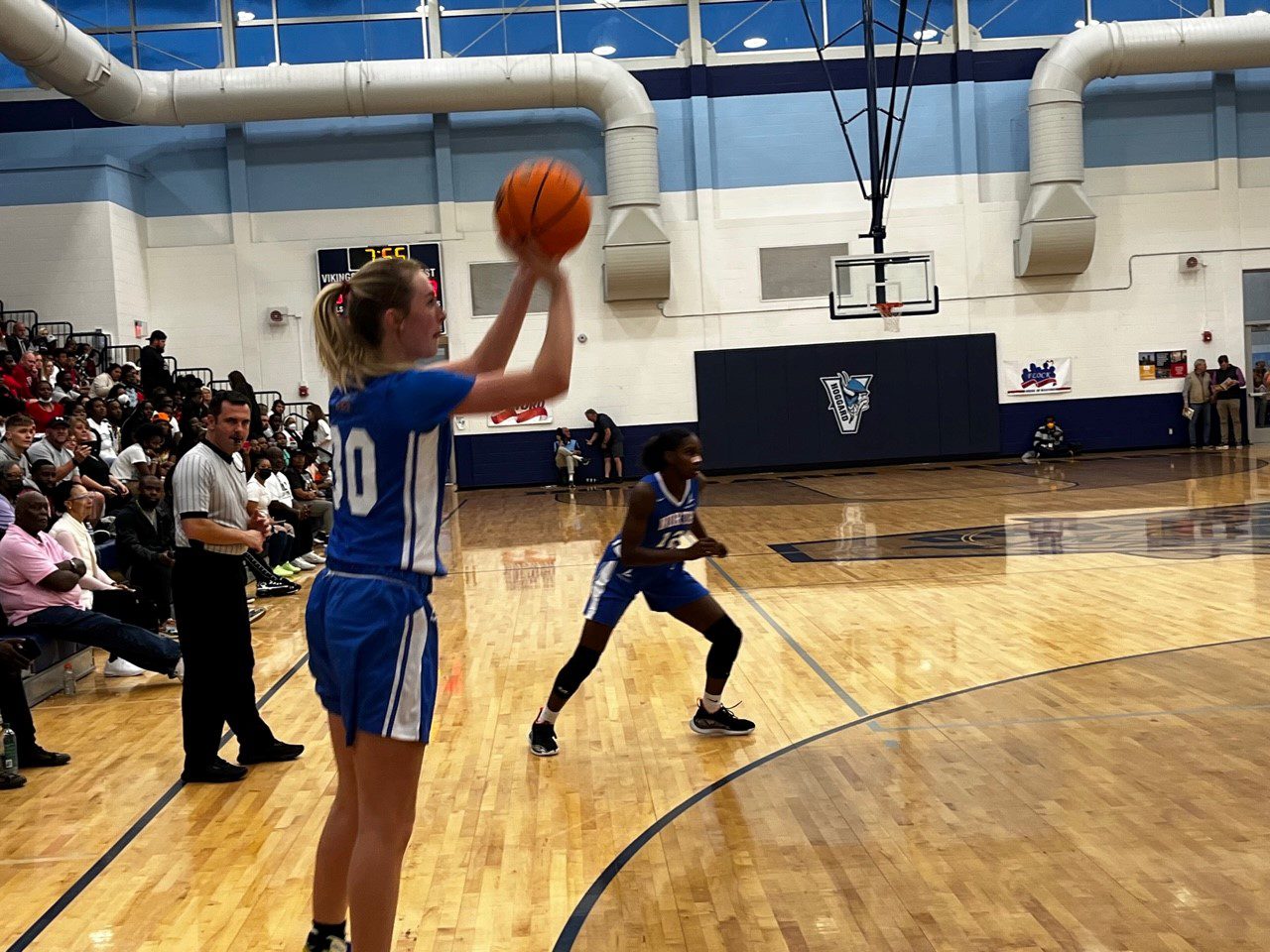 (Wilmington) – – The more you watch Torin Rogers on and off the floor you realize she is a special lady that knows a lot more than basketball.  She makes people who watch her proud when she is on the floor and how she makes points and plays great team basketball.  Going to a game where the best players from two states go to strut their stuff, you usually don’t see team basketball.  You tend to see more self-centered plays.  It is an honor to be invited to play in a game like the 2022 Carolina Classic where the best seniors from North Carolina and South Carolina come together to face one another for state bragging rights.  Torin continued to play good fundamental, balanced team basketball, and ended up scoring 13 points, which was the leading number for two women on the North Carolina basketball team.

Jonathan Livingston Seagull is a story that reminds me of Torin.  The Richard Bach story is about Jonathan, a young seagull wants to see more, do more, fly as fast as possible until he busts into the next level of existence.  There he has golden wings and meets an admiral bird that teaches him perfect flight.  Torin had the opportunity to learn from two of the best women coaches, Barbara Nelson of Myers Park High School who served as head coach and Jamie Willoughby, the assistant coach from Tarboro High.  Nelson has more than 700 wins, nine state championships.  Well before going on into creation, Jonathan Livingston Seagull goes back to his home and teaches younger birds to earn their golden wings.  One can only hope we see Torin again teaching our younger Bulldogs to reach perfect flight.

The 79-to-53 North Carolina win over South Carolina was the 14th win in the 23-game history of the games between the two states.  During the last ten Carolina Classic game, this was the 6th time North Carolina has won in women’s play.

South Carolina regrouped and came back to the floor with a better plan.  South Carolina jumped to a 9-to-2 run to out pace North Carolina.  The momentum was about to shift to South Carolina until a big play with Journee McDaniel was fouled and placed on the line to make an “old fashioned three-pointer,” a two-point basket and a free-throw.  This changed the momentum and push North Carolina’s Bobbi Smith and Torin Rogers to heat up with good shooting from the floor.  Both players score 13 points each, which lead all North Carolina scorers.

The shooting and defense were stellar.  North Carolina Head Coach Barbara Nelson felt like the rebounding and second chance shots could have been better, if there was an area to improve.  “But we were able to get the points in.  And down the stretch in the second half, we really challenged our kids to get stops defensively.  Get rebounds.  We felt like they (South Carolina) kept getting back in the game because we weren’t focused on the urgency of defense.  In the second half I felt like we focused on that.  We felt like defense was really important.  We felt like rebounding was more important.  We played in shorter stretches.  Instead of five minutes at a time, we played three minutes at a time.  That gave them (North Carolina players) a sense of urgency and they played harder,” Coach Nelson explained.  Coach Nelson’s full comments on the game and Torin Rogers can be heard at the link in this story.

“It was super fun. You know I was real excited coming into this (Carolina Classic Game).  Everybody out here is a great player.  So just to be invited and be a part of it was so much fun,” Torin explained how great the experience was.  Torin’s full interview can be seen at the link in this story.

The teams are developed with ten of the best high school players.  The coaches had an unspoken but understood agreement to do whole-sale substitutions every five minutes in the half to ensure all players had opportunity to play.  The game was also played in two 20-minute halves.

Scoring (as it appears in the official scorer’s book).  Below each name the school where the girls are going to attend college and play basketball.

There is a beam of pride and proud that came from the near two dozen family members and friends that made the 8-hour trip to watch the Carolina Classic, featuring Torin Rogers.  Texts, Facebook live shots, notes on the back of programs, and pictures filled the mobile air waves.  Her mother Donna , who was left out of the program as Torin’s mother, looked on the game with pride.  And on the free-throws Torin attempted you could hear Hayden Rogers, Torin’s father, utter “Knock it down Buttercup,” something he has said each time she goes to the free-thrown line since she was in third grade.  After the game, when we were trying to get an interview, Torin was interrupted several times from coaches and other players telling her how highly they thought of her and her play.

Coaching a great talent like Torin has to be an honor.  Murphy Lady Bulldog Head Coach Ray Gutierrez thinks so.  “It was great.  She represented our school (Murphy High) our team very well tonight.  She is so humble that she was kinda nervous coming down and didn’t know if she could play.  But I knew.  Those who have seen her know (that she can).  She’s a great basketball player.  It was a great way to finish off a wonderful high school career,” Coach Gutierrez said after the game.

The admiral bird that has been a profound influence on Torin this week, Coach Barbara Nelson is pleased with how Rogers performed.  She believes the performance Torin gave is expected from a gifted athlete.  “I think the rep that Torin has is that she is a really good shooter.  But, I think that rep falls short of what she does.  She is a really good defensive player.  She rebounds the ball exceptionally well from a guard’s standpoint.  She knows how to play without the basketball.  Torin is a very skilled, very high IQ basketball player.  When we first picked her up and I was calling people about her they were ‘she can shoot she can really shoot.’ I feel like that is only a small piece of what she can do.  She can really shoot. But she can really play too,” Nelson noted about Torin Rogers after the game.

Robert Frost wrote “Nothing gold can stay.”  We know that Torin will stay gold to Murphy family and friends for a long time.  We just hope that some of the gold will inspire younger players.  From her golden hair and smile, her golden performance on the basketball and volleyball floor, to her golden personality, she inspires and warms the hearts of people who watch her play and talk to her.  I think Frost was wrong, we have a lot of gold in our life from Torin Rogers. 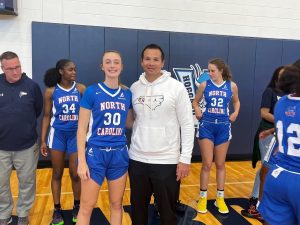 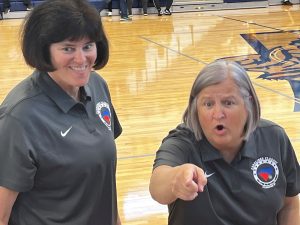 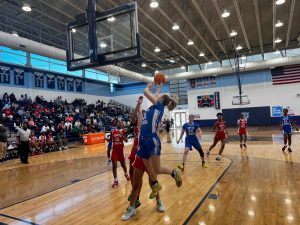 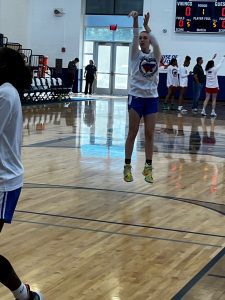 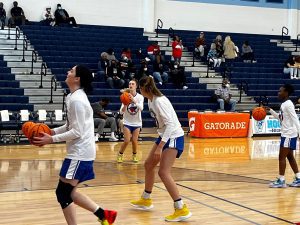 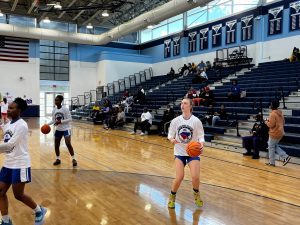 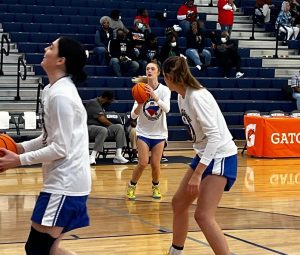