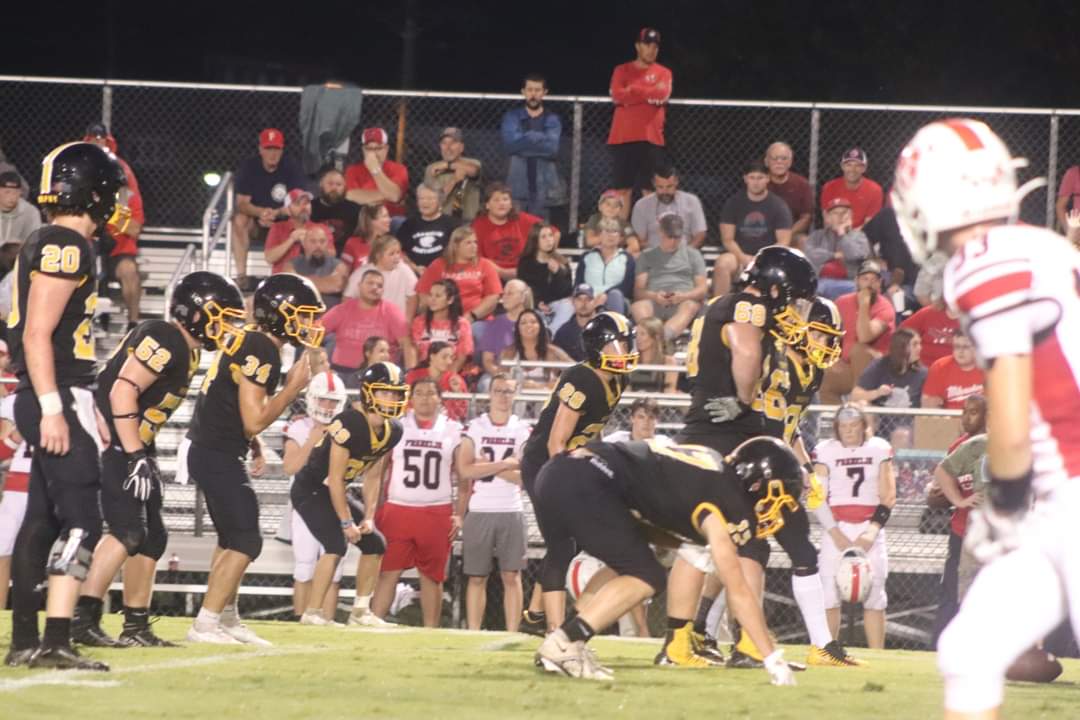 (Murphy) – – Spirits are high in the Murphy Bulldog camp after a week of good practice.  The Murphy Bulldogs (0-and-1) have been working on mistakes, miscues, and some fatigue from Friday night’s 24-to-Seven loss to the Franklin Panthers (1-and-0).  “Every mistake and problem we had in the Franklin game is correctable and will be corrected.  We are a good football team,” Murphy Head Football Coach Joseph Watson stated after practicing this week.  There were some long faces after the game and silence where you normally hear cheers and excitement.  After three great days of practice the Bulldogs seem to have become rejuvenated and focused on the game at Commerce High Friday night (August 26, 2022).

The Commerce Tigers may be just another feline team like the Franklin Panthers.  Commerce has a couple of great running backs that are downhill style and supported with a skilled quarterback.  The offense will align in an I-formation with Sophomore Fullback Tysean Wiggins (5’8 and 200lbs) and Sophomore Tailback Jaiden Daniels (5’8 and 155lbs) who are both quick as cats and greased lightning (take your pick).  Junior Quarterback John Paul Allen will round out what some may call a Triple-I.  Jaiden does a lot of run plays with good protection from the offensive line that averages 220lbs and is agile from the old school four-point stance that likes to bust the snot out of you.  Tysean is bruiser of a running back that is good on traps and power plays. The number three man in that formation is Quarterback Allen that may call is own number in a quarterback option to throw in some tricks to the Tiger scheme.

There is something missing from the second paragraph in this story . . . Passing.  During the 21-to-17 win for the Tigers over Southside Christian (SC), there were not a lot of passes.  The average game for Commerce may produce 50 plays.  Out of that number of plays, the Tigers may throw two times (average).  From the Murphy Defensive Secondary, Hunter Stalcup is expecting a strong run game from Commerce.  He also says the Bulldogs have worked diligently to improve the defense in preparation for this week’s game. Hunter’s comments can be heard at the link in this article.

Tiger defense will work out of a 43 defense that may shift to a one technique and go shade 50 depending on how they feel an adjustment needs to be made.  The defense is not as well-known and may throw some unique schemes to stop Murphy.  Murphy Quarterback Cole Laney is anticipating a tough defense like Franklin.  Cole’s comments can be heard at the link in this article.

Murphy’s practice week came in like a lion and out like a lamb it appears.  Bulldog Head Coach Joseph Watson says there were several clear points the team needed to build and improve, which took some honest conversations, good strategy building, and focused week of practice.  Rolling all of this out seemed to erase the long faces we saw this past Friday night to some confident young men that know they face a tough Commerce team.  Listen to Coach Watson’s comments at the link in this article.

The Commerce game will not be a cake walk for the Murphy Bulldogs.  It should be a close and exciting game.  Murphy will see some of the same elements it encountered with Franklin.  With that in mind Murphy unravels the unknown and builds confidence and should be a good game.  Listen for more information with Inside the SMC on Team FYN Sports Thursday (August 25th) at 7PM.  Team FYN Sports will stream the game on FYNTV.com at Commerce High (GA) beginning at 7PM with the kick-off at 7:30PM.  Stay connected to Team FYN Sports for breaking details.