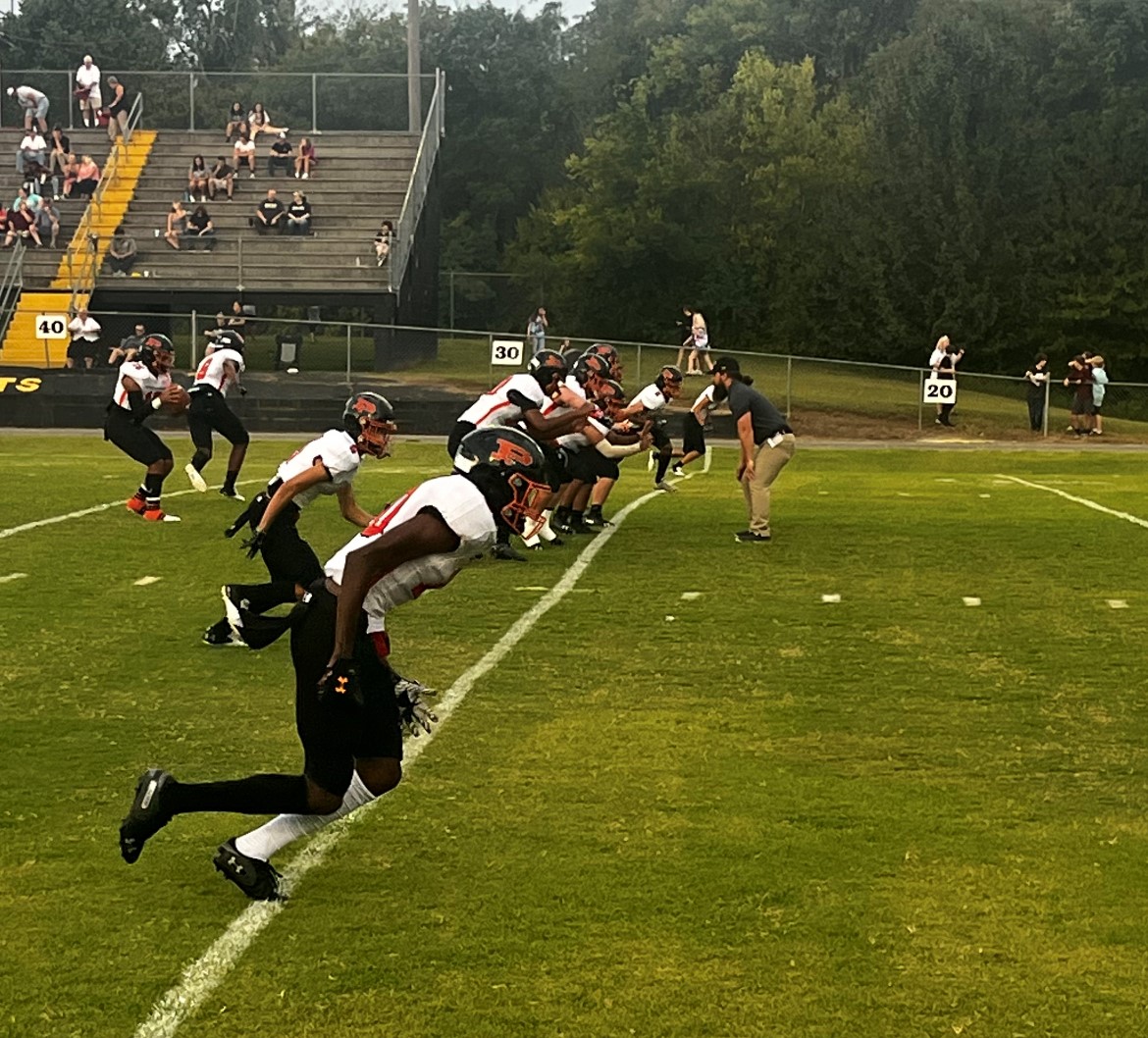 (South Pittsburg, TN) – – Wipe the black board clean for South Pittsburg from the 24-to-21 2021 1-A State Championship game and the slate has been quickly chalked in 2022 with an exceptionally talented and young Pirate football team.  Draw a big stick figure at quarter back, two lanky and talented flankers on each side of the line, and halfback that will jump off the board with speed.  The line is not your usual squat-heavy guys.  They are portly and can move.  You won’t draw many of the same figures on the offensive side on the defensive side, which will give some rest to each squad.  You may end up dotting a few arcs on this board as the Pirates like to pass and they can catch the ball and make magic happen.

The 2021 Championship Pirate team has been eaten up by graduation.  The leadership to shape the South Pittsburg into a fabled team this year remains from last year.  Early in the ’21 season, Coach Chris Jones (South Pittsburg Alum) left South Pittsburg to return to Canada to coach in Edmonton in the CFL.  He took a few Pirate coaches with him but left some secrets to his playbook behind along with new Head Coach Wes Stone, who is a member of the 1994 Champs.  Stone’s father Johnny played on the 1969 Championship team; his brother Matt was a standout on the 1999 Championship team; and older son Jake was on the 2010 Championship team.  Stone has a goal to coach the Pirates to a gold ring this year with his youngest son, Jace, who plays on the current team at wide receiver.

Back to the Pirates!  Junior Kamden Wellington is a solid quarterback that can hit a dime from fifty yards out.  Weillington is not easily shaken because his O-line provides a lot of protection for him.  He has completed 75 percent of his passes this season, which makes up a respectable number of the plays.  The Pirates will show spread offense with receivers Senior Nas Starky, Jace Stone, Jacob Bivens (also the kicker), and Racash Kelley, who is one of the favored targets.  Senior Taja Robinson is a widely utilized halfback that is quick as a cat.  The ground game may feature the usual powers, buck sweeps, and a few jet sweeps.  Keep your eyes peeled for lots of bubble screen passes and wheel routes.  The Pirates demonstrated its full spectrum of offense last Friday in a 65-to-6 win over a weaker Lookout Valley High, which is this week’s hosting opponent to Hayesville.

The Commerce win for Murphy is a good learning tool for the Bulldogs in preparation for this week’s game.  The second half Bulldog defense illustrated the fast reflects and discipline needed to stop an opponent.  Murphy Senior Lineman Mason Lineman says the Commerce game and two weeks of prep have been good for the Bulldogs.  Thrasher’s comments can be heard at the link in this article.

South Pittsburg’s defense will be locked in on Murphy.  History buffs may think Winston Churchill coaches the Pirates defense because they will wage war on the land and in the air with all the strength and might God can give them.  The Pirates gave no breathing room to the Lookout Valley Yellow Jackets offense by picking off four passes.  Two were pick-six returns.  The defensive front line is not tremendously huge.  They are very skilled with Nas Starky and Logan Hargis at each end looking like trees with a thicker and shorter three down linemen that can fly to the ball.  Juniors Racash Kelly and Jacob Bivens, corner and free safety respectively, are very capable of picking off passes.  Otherwise, the Pirate love to crowd the box with Kelly and linebackers JaMychal Buckner and Jamarion Farrior to stop the run.  Murphy Quarterback Cole Laney talked to us about the offensive prep for the South Pittsburg game.

South Pittsburg has had its ups and downs this season, with only three games played.  Sometimes they were the bug and sometimes the windshield.  The Pirates won the season opener 35-to-6 against Sequatchie County’s Indians, who are now 2-and-1.  South Pittsburg was shut out in game two by Chattanooga Christian 41-to-nothing.  Last week’s 65-to-6 win over Lookout Valley put more pep in the Pirates step for this week’s game with Murphy.  Coach Wes Stone spoke to us after than game.

Murphy has to bring its “A” game for four quarters of football on Friday.  Bulldog Head Coach Joseph Watch says the two weeks off has been a good prep period for Murphy.

The trip to South Pittsburg is 121 miles and about 2 Hours 15 minutes, assuming good traffic.  Good traffic is not usual for I-75 to I-24 connections in Chattanooga.  Enjoy the US 74 ride through the Ocoee gorge and take I-75 South into Chattanooga.  Connect to I-24 west until exit 152B.  Take a left and it’s a straight shot to the high school. Otherwise connect up with Team FYN Sports for our coverage of this game.  Details on our start time and coverage will be posted on the Team FYN Sports Facebook page.