(South Pittsburg, TN) – – The Bulldogs are fine as grade 6A silk after doing something the number crunchers and analysts said they could not, which was defeat the powerful South Pittsburg Pirates.  Murphy took command of the game from the first possession and did not let go of the scoring lead or tempo.  By halftime, the Bulldogs held the lead 28-to-14.  The sports pundits may have given their nod to the Pirate, who were expected to make a big splash in this game.  The Murphy defense drained the pool before the Pirates could make a dive to the end zone.

Murphy Junior Running Back Hunter Stalcup is one of the shining jewels in the Murphy Offense.  The Bulldog offensive front line opened the holes and Stalcup either took the ball to the first down marker or to Touchdown Town.  A few time Hunter had to take to the air and leap like a deer to make the play over the pugilistic Pirate defense.  The first possession of the game carried out like a scripted play with no miscues, penalties, or problems, which melted more than four minutes of clock and launched Stalcup to a 24-yard touchdown carry.  Through the first half, this was characteristic of the offense.  It was a good thing to keep the defense off the field with rest to carry out its work in the second half.  Speaking of pugilists, the Bulldogs and Pirate traded touchdown punches until Stalcup went on a 56-yard touchdown sprint with 10:10 left in the second quarter.  Hunter would score again with 51 seconds to go in the second quarter and his final time with 10:51 left in the fourth quarter on a 12-yard rush.  Game stats were not available at the time this article was written, but he had 113 yards on touchdown rushes alone.

Hunter Stalcup gave his thoughts about the game.

Pirate passing is the pride of its offense.  A number of times Junior Quarterback Camden Wellington lit up the field with a swing, dump, or hot route pass to his favorite receivers Nas Starky or Racash Kelly.  The Pirate had its work cut out for the second half to erase the Murphy 14-point lead and take the game over and South Pittsburg knew the pass would be needed to reach success.  Playing with passion and reading the keys well, Murphy’s Brayden Killian, Mason Thrasher, Will Johnson, John Ledford, and others hurried rushed Wellington to a point of throwing the ball away . . .draining the pool. Unlike last week when we told you the South Pittsburg front line was able to hold off defenders long enough to allow him to drink a pot of coffee.  This week, Wellington watches the Bulldogs eclipse his view.  Lineman Mason Thrasher gave his comments after the game. 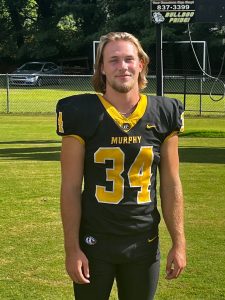 Murphy’s smooth as silk play hit a wrinkle part way through the second quarter as Senior Running Back and Linebacker Ty Laney went down with an injury.  The injury stunned both Bulldogs  and Pirates and stopped the game for an extended period.  Murphy appeared to pick up the pieces fromthe loss of Ty Laney; played next man up with Jonah Hedden; and play with passion for their injured brother.  Coach Joseph Watson mentioned after the game it was wholistically a great game as they played with Ty on their mind.  Laney was taken to Children’s Hospital at Erlanger in Chattanooga where he was taken to Surgery for his injury Saturday morning.  Our best wishes for a speedy recovery to Ty Laney and comfort to his family and the Bulldog Family.

There are more “Pirate” types ahead of the Murphy as the Bulldogs will travel to Fanning County this coming Friday (September 16th) to face the Rebels.  Fannin County had a commanding 38-to-12 win over Pickens County on September 2nd.  The Rebels had a rough start to the season with a 14-to-7 loss to the Union County Panthers and 49-to-35 loss to Gilmer.  Murphy and Fannin County will kick off the game on Friday (September 16th) at 7:30. Team FYN Sports is planning coverage of this game.  Stay connected for more details this week for a preview of the game.