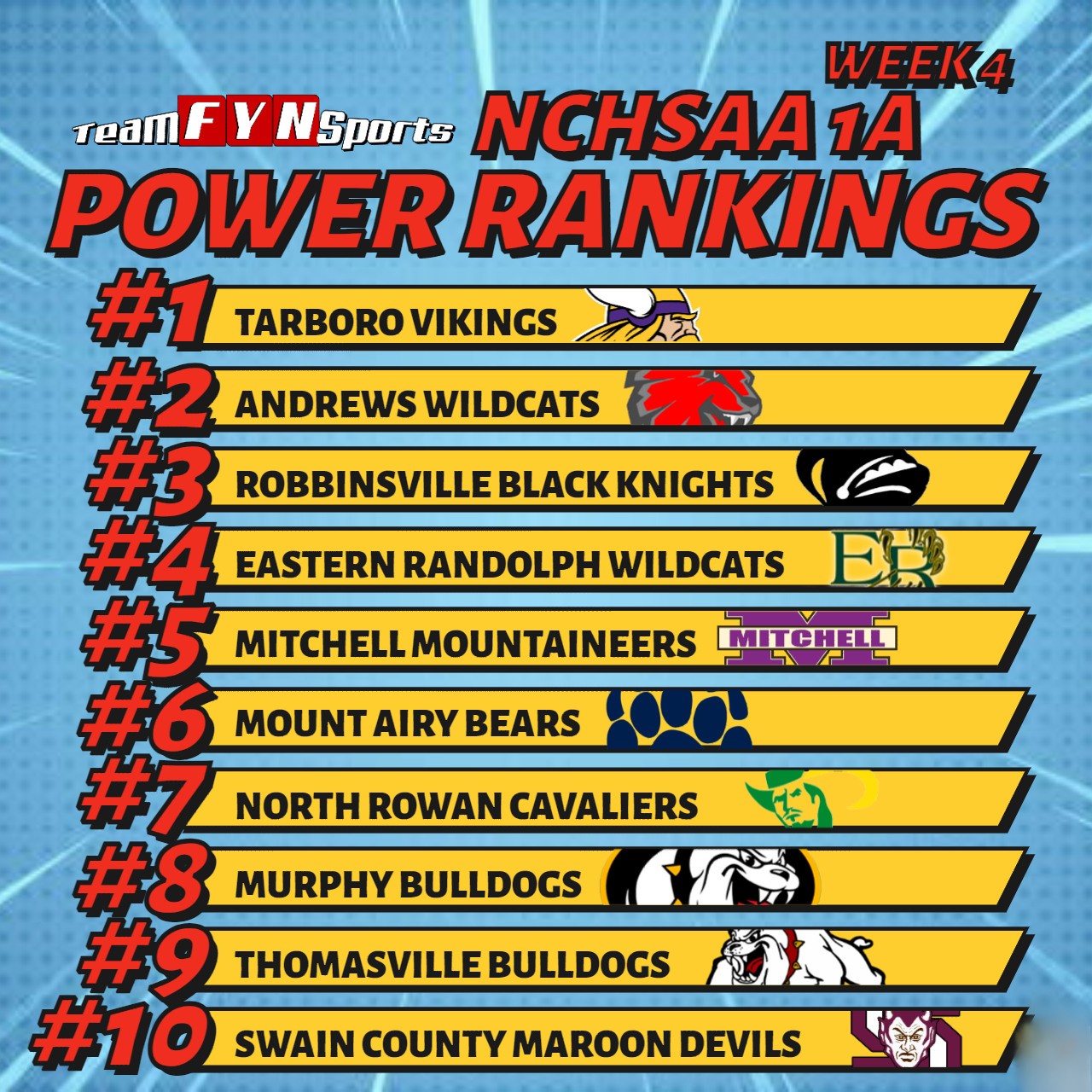 With only 4 weeks of football under our belt in the 2022 season, it seems like we have seen it all. From blowouts to double-overtime upsets, the 2022 North Carolina High School Athletic Association football season has given us all we could ask for. Since we’ve been able to get a grasp of what’s what and who’s who on the gridiron for the previous 4 weeks, it’s time to take a look at our #TeamFYNSports NCHSAA 1A Power Rankings. Our Power Rankings are based on a team’s strength of schedule, win-loss record, recent performance, and the patented “Jake West eyeball test”- which is promised to be better than whatever mumbo-jumbo MaxPreps uses for their rankings. We will release our Power Rankings bi-weekly up until the start of the 2022 playoffs. 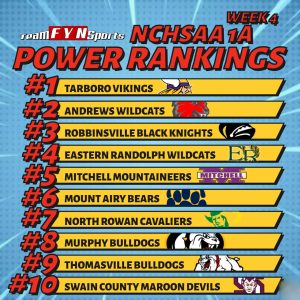 The reigning 1A State Champion Vikings are simply the best team in 1A football yet again. To quote an old friend “They’re the champs till they ain’t the champs no more.” That statement could not ring truer when talking about Tarboro as they sit at 3-1 overall with their only loss coming to 2A Hertford County by just 2 points.

After a whomping of last year’s state runner-up Mitchell on the Mountaineer’s home turf, Andrews has proven that they belong. Week in and week out they’ve shown they’re one of the best teams in 1A football, but they never seem to get the respect they deserve. They’ll face a challenging SMC schedule after this week’s home game vs the North Georgia Falcons, but they should go into conference play healthy and fresh.

The Black Knights have been one of the favorites to come out of the West for nearly the past decade, and the same can be said in 2022. Heading into their bye week with a 3-1 record, Dee Walsh and co. have to be happy with the way they’ve performed so far this year. Offensively they are a wagon and they’ve found their QB of the future in Donovan Carpenter who’s come up big so far this year, not to mention they have arguably the best running back in the state in Cuttler Adams.

After dropping one right out of the gate to 3A Eastern Alamance, the Wildcats have rattled off 3 straight victories. After losing to Murphy in the playoffs last year, Eastern Randolph looks to be playing with a bad taste in their mouth in 2022.

The Mountaineers have struggled to stay healthy as of late. Their do-it-all quarterback Ty Turbyfill played in their previous matchup vs Andrews, and while he threw the ball pretty well he was obviously hobbled as he did not record a single carry. I’m not making excuses for the loss, I think even with a healthy Turbyfill they still lose that game to Andrews, but if they’re able to get healthy they should still be poised for a deep playoff run come November.

The Granite Bears were the talk of the message boards last year. With their high powered offense and lockdown D, they looked nearly unbeatable in the regular season last year. Statistically they had one of the best season ever in 2021, but it was all for not as they fell to Mitchell in the 4th round of the state playoffs. With that being said, they’ve reloaded this year and are looking to make a name for themselves in 2022. With the only blemish on their record so far coming in a 14-12 loss vs power house East Surry, the Granite Bears have looked very impressive 4 games in.

So far, it looks like the offense is going to come easy for the Cavaliers as they have 34 points or more in all 4 games this season. More importantly though, they’ve pitched 2 shutouts along the way and their defense is only giving up 14 points per game.

Things looked pretty grim for Murphy after their week 1 loss to Franklin. They were all out of sorts on both sides of the ball and fans had the panic button in their pocket ready to smash it.

Since then, the Dogs have gone on to defeat Commerce and South Pittsburg on the road and they look like they can hang with just about anybody on the football field. The coaching staff has done an amazing job this year setting their athletes up to succeed and whatever speech they gave to the guys after the Franklin loss must have been equivalent to the one Herman Boone gave at Gettysburg in Remember The Titans. They still have some holes to fill, especially after losing Senior Ty Laney to injury last week, but don’t count the Dogs out just yet.

We will find out a lot about these Bulldogs on the 23rd when they travel to North Rowan to take on the Cavaliers. So far it’s been smooth sailing for Thomasville, but it’ll be interesting to see if they can keep it up as they get into the meat of their schedule.

The biggest surprise of the year for me by far have been the Swain County Maroon Devils. 1st year Head Coach Sherman Holt has done an exceptional job leading his team thus far, and my hat’s off to him. Josh Collins and Gabe Lillard are a nasty 1-2 punch out of the backfield and if the Maroon Devils can get out of their own way they will be a force to be reckoned with as they year goes on.